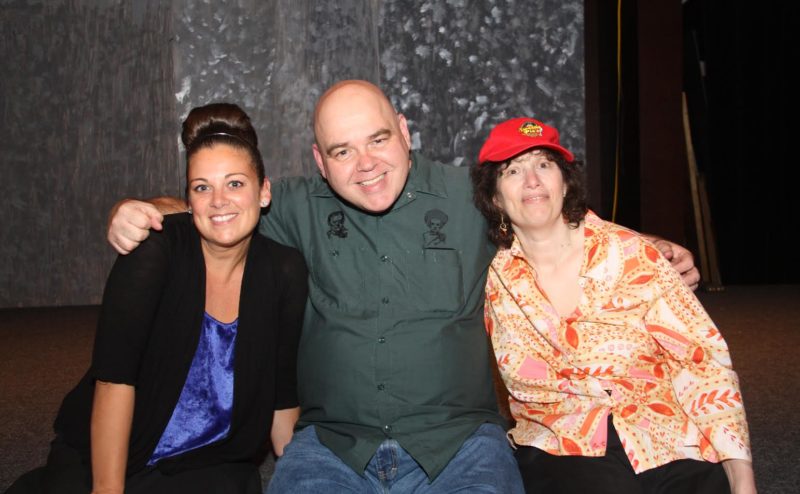 Now entering its second year, the Boston Indie Mafia opens its doors to filmmakers, actors and media folks at all stages of their career to network, create films, pitch projects and get advice.

Joseph Bouvier, co-founder of the Boston Indie Mafia (BIM), recalled that it all started with a hashtag on Twitter. “I was having a conversation with a local screenwriter and suggested we should put together a networking event for no-budget filmmakers,” said Bouvier. “Their response was ‘#BostonIndieMafia.'”

That hashtag brought the three co-founders – Bouvier, Lisa Meri and Stacey Forbes-Iwanicki – together to form the independent film collaborative, which just celebrated its one-year anniversary June 27 at The Center for Arts at the Armory in Somerville. The event also included the screening of short films made as part of the group’s inaugural Wicked Film Challenge.

For Bouvier and his BIM co-founders, the premiere of the ten short films in the group’s Wicked Film Challenge – a short filmmaking competition for teams – is a milestone in itself. It showcases what the group’s mission has been since the beginning.

While Meri said she wanted to “form and be part of a group that was inclusive of all regional indie filmmaking creatives” and Forbes-Iwanicki said she hoped to see unrecognized talent “receive the recognition and support that they deserve,” Bouvier endeavored to reconnect with that community by establishing affordable events for no-budget filmmakers. Bouvier noted that the hope that united all three of them “has always been to foster community among regional filmmakers.”

In the following interview, Bouvier graciously shares how BIM has made that dream a reality, while helping locals fulfill their own filmmaking dreams.

Christine Galeone:  Congratulations on the one-year anniversary of the Boston Indie Mafia and its hobnob events! Were there any challenges along the way?

Joseph Bouvier: Thanks for congratulating us! My biggest challenge, personally, has been letting the community develop organically. I want to, sort of, rush along and make it grow faster. And our goal has been to let things develop as they’re developing. In a lot of other organizations, there’s a lot of push for marketing and there’s heavy schmoozing. We’re trying to be a little more relaxed. Our goal at our events – primarily – is to let people connect with each other and not feel like they have to…do a song and dance. They can just, kind of, be themselves and connect and, hopefully, collaborate.

CG: What happens at a typical BIM Hobnob?

Bouvier: They usually run 6:30 to 10:30 on a Saturday evening. We have about half an hour of mingling, about an hour of screening, half an hour of Q&A and then about two hours of what we call hobnobbing – just people getting together and talking and connecting.

Everything’s designed to be focused on the filmmakers, and not us as an organization. And we try to do that. For instance, at our Q&A, we try to give every filmmaker who’s screening their moment in the spotlight. We usually give them five to 10 minutes of individual Q&A for each of their films. And it seems to work out pretty well, because they get to shine…

But if they screen at one event, they can’t screen at a consecutive event. They have to wait an event. Because we feel like that’s a way to keep it fair for the filmmakers.

CG: How has BIM made a difference in the lives of local filmmakers? Any success stories you’d like to share?

Bouvier: At pretty much every event, I’ve heard that one filmmaker has usually connected with actors, DPs, editors…

Jim McDonough, one of our core members, started out at a screening as a filmmaker. And he screened – at our very first event – a film called Manicorn. And for his next film, Sunshine, he ended up hiring three actors to do voice work…out of that event. And I’ve heard stories like that from all the events.

CG: It looks like the Wicked Film Challenge offered budding filmmakers a lot of fun opportunities. Could you please tell me a little about the competition?

Bouvier: We based it on the 48 Hour Film Project, because it seems like a format that’s familiar to everyone. But we didn’t want it to be 48 hours…so we decided we would announce the event in January, and we would have a kick-off in March. And the filmmakers would film for 70 days between March 22 and June 1.

They had more room to shoot and more room to edit, versus 48 hours…and the filmmakers I talked to had a lot more fun with that, because they could go out and experiment a bit more. And they didn’t feel rushed to get what they needed to get.

CG: What are your hopes for the group’s future?

Bouvier: Our first hope is that we want to continue to expand our outreach effort and broaden the scope of our events.

We hope to (someday) provide grants to filmmakers for…narrative films. And this year, we’ll probably develop an internship program, so young filmmakers and creatives can, kind of, get hands-on training and experience from other production professionals.

CG: What’s the best advice you can give to new filmmakers?

Bouvier: I would say just go out and shoot. And don’t be afraid. Don’t be afraid to make mistakes. Don’t be afraid of what other people think about you. Just go and find your voice. For me…the only way I found my voice in storytelling was by going out and trying different things and sometimes succeeding and sometimes failing. But…I learned more from the failures and not succeeding than I did from the successes. So, I think just getting out there and taking the steps and just doing it is huge, you know?