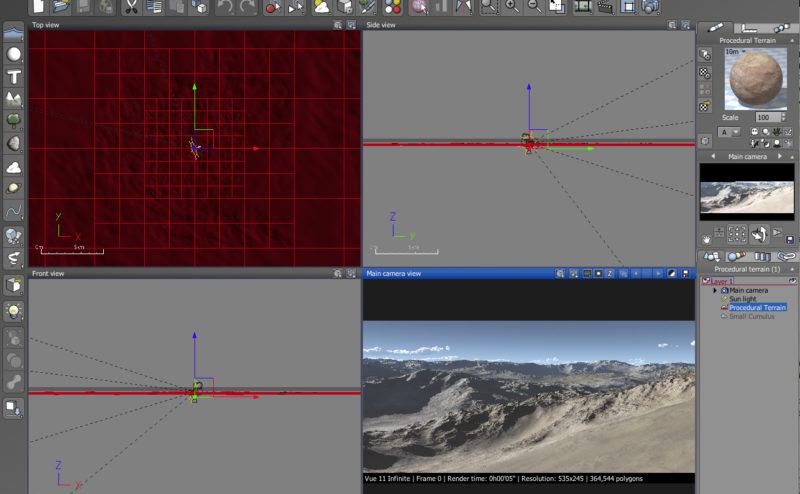 Vue 11: Create Your Own Pandora or Any World You Can Imagine

Share
With Vue (version 11), from e-on software, the world is at your fingertips. Any world you want. If you can dream it, you can create it. And animate it and move through it.

Vue 11 is an advanced-level computer program for creating, animating and rendering natural-looking 3D environments. In other words, it lets you create worlds — worlds that can look like places on earth, on other planets or even other dimensions.

Vue has been used in feature films such as Hunger Games, Hugo, Super 8, Thor, and Avatar.

If you consider how much data and computing power it might take to create a representation of a living environment, you’ll get an idea of Vue’s power: terrains, landscapes, vegetation, rocks, water, clouds, sunlight, snow, rain.

Think of how many trees and plants there might be on just one small hill. Vue can populate that hill with your specified plant life with just a few clicks. Add sky, clouds, sunlight, weather, rocks, soil — the list goes on and on. And not just for one hill, but also for an entire landscape: mountains, plains, deserts, rivers, and jungles.

As impressive as creating one still life scene can be, Vue 11 allows you to fully animate this scene, adding wind, rain, snow, changing clouds and more. And you can move into and through the world you created. All the elements are created with three dimensions, so you can orbit around them and see all sides.

Vue 11 adds a significant number of new features and improvements over the previous version, including the new particle system for creating realistic rain and snow, EcoParticles, camera mapping and multi-pass rendering.

Given the complexity of creating millions of elements and combining them, and their relationships to one another, into a 3D environment, you might think Vue would have an incredibly complicated user interface. In fact, Vue’s interface is surprisingly simple.

Users of products like Photoshop and Illustrator will recognize the layers panel. Users of motion graphics or 3D compositing and design programs, such as After Effects, Maya, Poser or 3DS Max will be familiar with the multi-angle window panes and the 3D movement tools and the point-of-view as represented by a virtual “camera.”

Like a real world environment, a Vue environment is comprised of many layers and many objects upon and within those layers. Vue has nearly limitless parameter settings to create and adjust the materials, textures, opacity, reflectiveness and movement of all the individual objects used in the composition.

Adding thousands or millions of trees, plants and rocks to a landscape would be a pretty time-consuming process. Vue can populate an entire world with vegetation in an instant, taking into account the underlying topography you created as well as interacting with forces such as wind, snow, rain and gravity.

A user can choose from the nearly 200 plants and trees included in the program, acquire additional plants from shared collections, purchase plants (and many other kinds of objects like cars, houses and animals) from e-on software’s Cornucopia 3D online store, or create a new and unique plant or tree from scratch or by modifying an existing object.

According to their website, Vue’s vegetation design system, SolidGrowth, “is based on random growth technologies that ensure no two plants of the same species will ever look exactly alike and will automatically animate plants so that they gently sway in the breeze, or twist and bend in strong winds. It also simulates the different color tones found in nature for even greater variety and realism.” Indeed, check the user showcase section online and you’ll find stunning images and videos that appear entirely realistic.

Vue 11 can take advantage of 64-bit operating systems on Windows and Mac, as well as improved rendering speed using a compatible video board (see e-on software website for a list of approved Open GL boards).

Keep in mind that rendering out a still image with millions of polygonal objects, or worse yet a video file with multiple frames per second, will be a slow process. In my testing on a Quad-core MacPro tower with 14GB of RAM, I was able to render out a 10-second, half-size Quicktime file in about 40 minutes. Rendering that into a high-resolution TIFF sequence took about 8 hours. Network rendering is an available option to offload the data crunching to a group of machines on a local network.

I would say that Vue 11 has as steep a learning curve as I’ve encountered with most high-end 3D applications. Once one becomes proficient with one of these programs however, the jump from one to the other would be easier, since the interfaces are similar. There are a multitude of tutorials online, free and paid, and an active online user community to help 3D artists get started or improve with Vue.