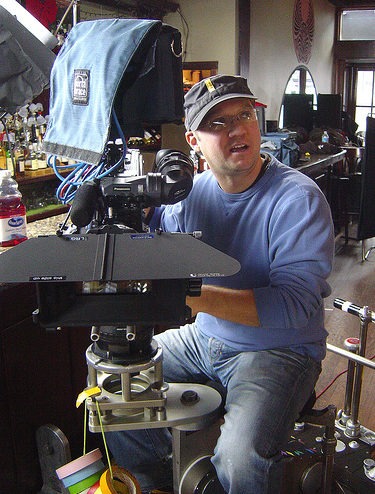 One Cinematographer Too Many

Share
How many is too many? Two, it turns out.

I was hired on as the cinematographer for a short feature that was shooting in New Hampshire. The director was someone I hadn’t worked with before, but he made his ideas and vision relatively clear. Without going into too much detail, the project was about three parallel storylines that intersected at the film’s end. It was a pretty solid script, and I was excited to work on it.

First day of shooting, I made it on set and discovered two other cinematographers. The director, unbeknownst to any of us, had hired three directors of photography.

‘Why?’ was the obvious question, and one of the three of us asked it.

The director said, ‘We’ll shoot each scene a few times, and we’ll use a different cinematographer for each take. That way, I can choose the best take from three different shots!’

One of the cinematographers, a young woman, quit then and there. ‘That’s not my style,’ she said, ‘Adios.’

The other cinematographer, a fellow about twice my age and half my height agreed to give it a shot with me, if I was willing. Why not? It was paid work, and as long as I’d receive credit depending on the shots selected, it was a new experience.

The director was pleased with this, and the shoot began after a couple of delays.

Things went downhill fast. The other cinematographer, who I’ll name ‘Bob,’ insisted on being the first one to go for each take.

‘I don’t want to be influenced by anything that Trace does,’ was his reasoning. And even that could have been understood. The problem was that Bob took forever, sometimes upwards of 40 minutes, to find a shot that he liked. The shooting schedule, of course, was such that I had precious little time to work my own magic.

I suggested, ‘Bob, perhaps we can split up the time a bit more equitably. Sound fair?’

I brought up my concerns to the director, who brushed them off. ‘You’re both doing great!’

I felt as though I was hardly doing anything, as I was behind the camera five minutes for every 20 of Bob’s. Still, the director was running the show, and the AD was terrific. We hardly ran over at all.

The next day was more of the same, to start. At the second shot, when I was lining it up, Bob said, ‘Trace, try it like this. I think it’ll come out better.’

I don’t like being second guessed by anyone with the exception of the director. The director said nothing, however, as Bob jumped on set and showed me how ‘best’ to take my shot.

‘Bob, that’s the shot that you just took,’ I reminded him after he dispensed his wisdom.

Bob nodded. ‘Try it that way!’

He stepped off set, and I lined up my shot once more, as if he hadn’t shown me anything.

‘No,’ he began from the sidelines.

I said, ‘Bob, this is how I work. I don’t comment on yours, and as long as the director is fine with what I’m doing, I’m going to do it my way.’

I looked at the director, who gave me a thumbs-up. I selected my shot, while Bob made a mocking snort or two. I ignored this, for now.

After lunch, we were scheduled to shoot the climax. I had been over the storyboards several times, and had what I thought was a dynamite way to film the sequence. Minimal shots and camera moves — it all came down to angles. Plus, it wouldn’t take too long, keeping me, hopefully, safe from whatever Bob cooked up.

To be fair, Bob wasn’t a bad cinematographer. He was a bad professional. There’s a difference, and it applies across the board in the industry.

Bob went first, of course, and it’s not really my place to judge his craft. Suffice it to say that it was different from how I would’ve shot it.

As the production schedule went, I had approximately a half-hour to shoot what it had taken Bob an hour and a half to do. No pressure.

I set each shot up as the director worked with the cast. Bob was in rare form. ‘No, you’ll miss her reaching into her pocket,’ ‘What about reaction shots? Do you ever shoot those?’ ‘Can I show you how I would do it?’

It took a Herculean strength of will to not wheel on the guy and give him the what-for, but as I said, I was there for the director, and I was there to be a professional. Of special note was when one of the actors said to me, loud enough for him to hear, ‘Why’d you bring your dad?’

The time came to shoot, and it had dwindled to about 15 minutes, given various circumstances. The AD told me that I could have a bit more time.

The shoot began, and I made better progress than I had hoped. About halfway through, Bob made a comment that I didn’t hear about a bounce card that I had set up.

The AD turned to him and said, ‘Quiet on the set,’ sternly enough that her intentions couldn’t have been doubted. Bob shut up for the remainder of that shoot.

Two months later, editing was complete, and the producer had arranged a screening for the cast and crew. I was sure to be there, curious beyond reckoning at how it had come out, not least regarding which shots were chosen.

Bob was there. We sat down, myself as far from him as possible.

It’s not an exaggeration to report that most of the shots chosen, with the exception of a few cutaways, were my own. My name was even listed first in the credits. I had never seen two cinematographers listed for a single film before, although I’m sure that it’s been done.

At the after-party, Bob followed the director around, asking him why one shot was chosen as opposed to another. Again, the word ‘professional’ flashed through my head. Bob finally left, allowing some stress to dissipate.

In retrospect, the next time I’m in that kind of a situation, I think that I’ll take that first cinematographer’s advice. ‘Adios.’