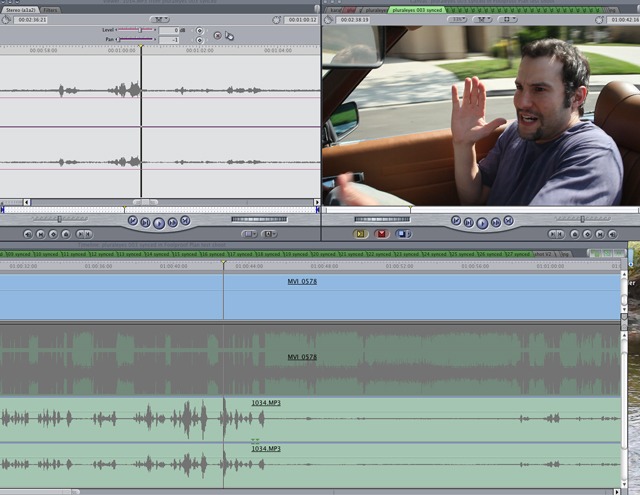 Syncing it Up with PluralEyes: Product Review

Share
Syncing separate audio and picture files used to be a tedious and expensive lab or post production process. With today’s computer editing systems and products such as PluralEyes, it’s easier than ever to do it yourself.

PluralEyes, by Vancouver-based Singular Software, is a plug-in product for Apple’s Final Cut Pro, Sony’s Vegas Pro, and Adobe’s Premiere Pro editing systems. With PluralEyes, the editor simply drops the video clips (with wild track audio from the camera) onto the timeline along with the separately recorded audio clips. Open PluralEyes, set a few options, and tell it to sync.

In a few moments, PluralEyes will begin the process of analyzing the audio waveforms from the original footage with the separate audio clips, move them around as needed and match them up on the timeline to create a new sequence with the clips all synced up.

It takes only a few moments, or minutes for longer sequences, and the results are quite good. PluralEyes syncs the clips to the exact frame, something that isn’t easy to do by hand.

Options include choosing whether to put all the synced clips into one timeline sequence or make a new sequence for each clip. When the clips are placed into the work sequence in chronological order, telling PluralEyes this speeds up the sync process. In contrast, the user can tell PluralEyes to “work really hard” to sync up troublesome clips, and it will take extra time to analyze and match the clips.

Other options (simple check boxes) include telling PluralEyes to replace the old audio with the new or keep both audio tracks, and leveling out the audio files.

By its name, the leveling option might lead a user to presume that PluralEyes will normalize the audio levels. However, this option does not change the actual volume or gain of the source audio file. The name refers to the internal processing that PluralEyes does while it analyzes and syncs the files. Actual setting or changing of the audio levels should be done in the editing program or a dedicated audio application such as Apple Soundtrack.

And for August I’m working on a story about pitch fests. There were two locals who attended one last week here in L.A. that I’m going to interview, and then a sidebar on do’s and don’ts when pitching scripts to producers and agents based on a book by a script consultant. I’m putting out feelers to development execs to see if they’ll share their stories about worst pitches from writers, but we’ll see if that materializes.

PluralEyes is also designed to sync up multi-camera shoots, such as concert footage. It will move the synced files into separate tracks in the timeline to help the editor make easier cuts between camera angles.

I shot a 5-minute test sequence from my upcoming feature Foolproof Plan (www.Foolproof-Plan.com) on the Canon 5D Mark II camera with double-system sound on a Marantz PD661 recorder purchased from Location Sound in North Hollywood CA. The result was about 50 clips that needed to be synced. I did these in a few batches, and the results with PluralEyes were almost entirely excellent.

A few times, PluralEyes failed to sync up obvious files, and I also noticed a few clips that somehow acquired some “drift” in the sync over a short period of time. PluralEyes recommends changing some of the options mentioned above to increase the effectiveness of the product syncing all the clips, and that seemed to resolve the issue of orphaned clips.

The audio drift is not really a PluralEyes issue, but is most likely related to the basic project settings. There are a lot of variables for an editing project, such as frame rate and size, aspect ratio, pixel shape, interlace fields vs. progressive, pull-down rate, etc.
Failing to get every setting right can result in a slight difference in frame rates between the video and audio files, sometimes as slight as 0.01%. But this is enough to cause the dialogue to go out of sync with the actors’ lips, called drift.

Fortunately, PluralEyes has a blog that addresses many of these issues and offers easy solutions. Changing the project settings in Final Cut Pro was simple, but must be done prior to syncing the clips.

The bottom line is that moviemakers need not fear recording double-system sound. It’s the best way to go (100 years of Hollywood movies and TV can’t be wrong!) and with products such as PluralEyes, getting your movie in sync is a breeze.

PluralEyes by Singular Software is downloadable from their website for $149. www.SingularSoftware.com

PluralEyes by Singular Software is downloadable from their website for $149. www.SingularSoftware.com