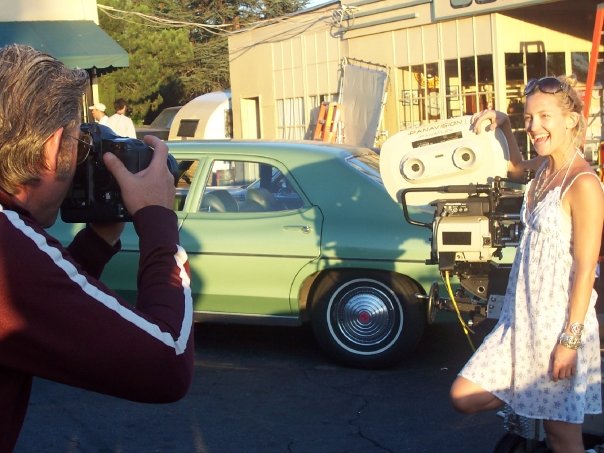 How to be a… Line Producer

Share
If you're someone who can make a budget, stay calm under pressure, is diplomatic, and doesn’t need sleep, then being a line producer might just be your dream job, says Chris Stinson. This month the NH native has four short films screening at the New Hampshire Film Festival.

Over the last 12 years, Chris Stinson, founder of Live Free or Die Films, has worked his way through several jobs — assistant director, production coordinator, and line producer on more than 30 feature and independent films — including The Hammer, directed by Charles Herman Wurmfeld, Harsh Times, starring Stinsontian Bale and Eva Longoria, and Me and You and Everyone We Know, winner of the 2005 Sundance Film Festival Special Jury Prize, and the 2005 Camera d’ Or at the Cannes Film Festival.

Stinson always loved movies as a kid, but it was when a friend in junior high made a stop animation film with matchbox cars that he decided making movies was something he could do, too.  “I bought a VHS camcorder and just started filming everything and ended up making some shorts and quickly got the bug,” he said.

Stinson grew up in New Hampshire, attended school there, and took a brave leap when he decided on a film career.  “I started school at Lyndon State College for a couple years and transferred to Columbia College in Chicago.  Then after one last summer back in New England, I loaded up my car and drove to Los Angeles without knowing anyone in hopes of getting into the film industry.”

When he arrived in Los Angeles he visited the film departments at UCLA and USC to check out the job postings on their bulletin boards.  “Most jobs we’re for little to no money,” he said.  He supported himself with what he made over four summers waiting tables in Cape Cod.  “I had about six months of living money saved.  It wasn’t really a struggle like I’ve heard from other people’s stories.  I think I’m a lucky guy.”  His first jobs didn’t pay any money but he didn’t that mind at all.  “I was stoked just to be taking out the trash.”

As Stinson got to know people, he started getting hired through word of mouth.  “It worked out pretty quickly.  I started out as a second AD [assistant director] and did that for five years.  Then I started production coordinating and did that for two years, and slowly taught myself how to produce and line produce.”

So just what does a line producer do all day?  The name itself comes from the line that divides the film’s budget.  Above the line is the cost of the cast, director, producer and writers.  Below the line costs are for virtually everything else including the crew, the equipment, the permits, the insurance, and the day-to-day running of the production, from traffic control to the director’s lattes.

The line producer estimates the total cost of a film by breaking down every page of the script into an actual daily production schedule.  From this schedule, the line producer is able to estimate the daily costs of putting the story on film as well as the total number of shooting days required.  The producers then use this budget to determine the total amount of financing required.  Once filming begins, it’s the line producer’s job to see to it that costs are kept within the budget, which loosely translates to avoiding overtime, reigning in equipment costs, and finding cost-effective ways to produce scenes.

What if the director insists on going overtime, or wants more expensive staging for a scene?  What does Stinson do?  “I say no.  I had to do it on my last film.  I told him [the director] in the morning of our first day that once our 12 hours were up at 9 pm, I was calling a wrap.  I do that.  It’s not the director’s money, so they aren’t allowed to shoot as long as they want.  After I pull the plug and call a wrap on the director the first time, they believe I’ll do it again.  I find they don’t dilly-dally when they know I’ll do that.  Ultimately my job is to protect the financiers’ money, and often the director is the person I need to keep in check more than anyone.  On a film with a bond, if the director goes over, they have the right to fire and replace the director.  I remind them of that, and then they behave.”

Another way Stinson keeps costs in line is by visualizing a scene and coming up with a way to shoot it cheaper than it’s written.  “That’s a huge part of what I do.  Like for instance, any scenes involving driving in a car at night, we almost always shoot with the car stationary in a parking lot, and move the lights around the car.  It’s called ‘poor man’s process.’  I do things like that all the time.”

What does a typical film budget look like?  Stinson, who works primarily on independent films in the $2 to $8 million range explains, “Let’s say we’re making a small film for $2 million.  It has 60 crewmembers and 25 days of shooting.  Rough costs include feeding everyone two meals a day runs about $1,000/day or $25,000 for the film (not including labor or truck rental).  Gasoline runs about $900/day or $22,500 for the film (not including prep or wrap days).  Insurance runs about three percent of the budget or $60,000.   If you’re closing off a street you can need as many as six police and you have to pay for their vehicles as well.  The costs of police and firemen add up, too — usually about $60/hour.  The cop cars are roughly $90/day, while motorcycles are $60/day.  Actor pay ranges big time.  Extras are a huge cost once the film is SAG.  Little films can’t afford a ton of extras.  It wipes out the budget.  The minimum SAG pay for actors on a $2 million film is $505 per day for eight hours.  I’ve seen it range anywhere from $25 K for all the actors and actresses, and on other films as high as $750 K.”

Because film crews are large and the average shooting schedule for a feature is 45 days, a film’s production location impacts the local economy.  For this reason, almost every city and state in the US offers tax incentives to attract Hollywood’s lucrative business.  “Nowadays everyone is chasing the tax credits to maximize their dollar,” Stinson says.  “Every time I get a script, the first question financiers ask me is where I think we should shoot it.  There are ‘right to work’ states, like Utah, that I’ve filmed in successfully, and I’m currently budgeting a project for Louisiana [for a story] that takes place in Los Angeles.  It’s weird leaving Los Angeles to shoot a film that’s written for Los Angeles, but to get back 25 percent of our money is worth it.”

What advice would he give to newcomers?  “One thing I see nowadays is film students graduating and feeling entitled to jobs.  Those are usually the kids who move back home to wherever they came from quickly.  You’ve really got to earn it out here, and I like that.  It weeds out the people who are afraid of hard work.”

Now he is focusing on line producing Sympathy for Delicious, to be directed by Mark Ruffalo.  “It’s his first time directing,” Stinson said.  “We’re shooting in Los Angeles on a 26-day shooting schedule.  I think it’s my 16th time working with a first-time director not including short films.  Seems to be my thing I guess.  After that I go right into Miranda July’s second film titled Satisfaction.  So I’m pretty booked through next spring.  During that period I have re-writes being made to the screenplay of Suburbs of Heaven (based on the novel by Merle Drown).  It’s the story of the travails of the Hutchins, a rural New Hampshire family."

Stinson hopes to have the screenplay for Suburbs finished by late next summer of 2009 with the plan of shooting it in New Hampshire in the summer of 2010.  “My long-term goal is to make films in New England.  It’ll be hard because all my contacts are currently in Los Angeles and there’s so much work out here, but escaping the cement and being closer to Fenway Park is where I see myself in a few years.  I’ll be back in October attending the New Hampshire Film Festival in Portsmouth, NH.  Everyone should go — it’s a blast!”