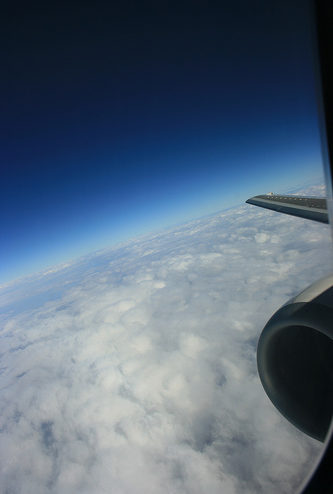 A month ago, I received a call from Sandra Mills, associate
producer of Music Nation, a network reality show in which musician
contestants sing and perform their way to a contract with a major record label.
Sandra says, “You worked with Ellie Glasser on the
History Channel’s Hefty Men series.  She recommended you for this gig.
Will you be a production assistant for us on the new season of Music Nation
in Los Angeles?”

“Sure,” I say, “Let me know when you need me in the next
few weeks.”
“Great!  We tape tomorrow, so we’ll fly you out today.
Where’s your closest airport?”
“Today?”
“Yes.  We’re taping tomorrow.  B-roll and such as the
talent arrives.  Your closest airport?”
Work on a show like Music Nation, do a great job,
make great connections, and you could catapult into steady work for the rest of
your life.  Or into a brick wall.  Such shows are notorious for doing absolutely
anything to stay on top.  It’s why they’re on top in the first place.
I say, “Sandra, I have two other shoots this week that I
really can’t reschedule.  This is pretty short notice—”  I hear several phones
ringing in the background on her end of the line.
“Don’t worry about it,” she says, “I’ll just call the next
name on my list.  Thank you for your—”
“Logan Airport.  Boston.”
“Great!”  She pauses for a moment as I hear her fingers
tapping on a keyboard.  “We have you booked for a 5 pm flight.”
I glance at my watch.  It’s 3:30 pm.
“You’ll have to run,” she says, then hangs up.
I’m flying over Utah when I realize that I forgot to pack
socks.  Well, no matter.  It’s the fact that I had forgotten to pack pants that
might come back to haunt me.
I make it to Il Vistoso,
the Los Angeles resort hotel where the first episode of the new season of
Music Nation is to be shot.
“Here’s lunch!” a fellow PA says, handing me a brown paper
bag.  I open it and find what looks like a gas station sandwich given a
cellophane once-over.  I look up at the girl, who grins as she says, “It’s also
dinner!  Enjoy!”
Sock-less and dinner-less, I follow the herd of PAs into a
banquet hall.  We pick up official Music Nation t-shirts from a table.
Sandra Mills walks in with hungry eyes, dark hair, and a bright smile.
She says, “These shirts must be worn at all times over the
next six days.  Enjoy them.  Be proud of them.  Return them at the end of the
shoot.”
A large PA with a beard asks, “Do we get extra shirts?”
Sandra says, “No, Amanda, you don’t.  The budget, you
understand.  Now everyone, don’t be too friendly with the contestants.  Keep
them nervous.  That’s great TV.”
I am assigned to work with another AP, Gregory Lambert, a
pale fellow with blond hair and an unremarkable face.  The very first thing he
asks me to do is, “Deliver this note to Sandra.  That would be genius!”
Sandra, who is directing the setting up of lights across
the room, turns to me as I approach.  “What are you doing on my side of the
room?  You’re assigned to Gregory!”
I hand her Gregory’s note.  She opens and reads it, then
says, “Okay, tell Gregory that I’ll be there at 12:30 tonight.”
I return to Gregory and relay the message.  He says,
“Good.  Now set up these chairs.  That would be genius!”  He is in a curiously
good mood for the rest of the day.  Soon the contestants begin arriving.
Some are alone, others in groups.  Some carry guitars,
others drumsticks.  Some are formally dressed, others are more casual.  All of
them look nervous, and they gather into little groups around the room as they’re
checked in.  I overhear one of them, a pretty pianist with long blond hair,
saying, “I jumped right into this, but maybe I should’ve stayed back home rather
than be humiliated on national television.”
“What the f*&^ is this?” someone with an Australian accent
yells outside in the hallway.  I’m near the door and peek out.  There towers
Lawrence Dawson, Australian music mogul and one of the celebrity judges of
Music Nation.  He’s holding a cup of Starbucks something-or-other.  Next to
him, quivering like an aspen leaf in pale autumn, is the PA who was handing out
lunch/dinners just an hour ago.

She says, “It-It’s y-your double-whip mocha, s-sir—”
“Wrong!  This isn’t what I ordered!  It’s crap!”
He throws it against her head and she cries out as the
plastic cup opens, spilling sticky, wet, yet delicious coffee-based beverage all
over the poor girl.
He storms off and I run over to help her clean up.  Gregory
leans out of the banquet hall and says, “Hey there, if you could come back in
here and test out the sound equipment, that would be simply genius!”
Finally, we’re ready to begin the pre-performance
interviews.  The contestants have been waiting for hours to begin this process,
and the supplies of saltine crackers and watery coffee are running low.
“Is there anything else to eat?” an older gentleman asks.
Sandra says, “No.  Budgets, you understand,” as she takes a
bite out of her Burger King four-patty Whopper.
Our first interviewee is Samuel Poulja, an older jazz
musician and tenor saxophonist.  Gregory sits across from him as I hold the boom
pole and shotgun microphone.
Gregory asks, “So, being on Music Nation is really a
dream come true for you, isn’t it?  It’s like the high point of your career?”
Samuel Poulja, who looks thoroughly disinterested, says in
a deep, slow voice, “I’d say that playing at Snug Harbor in New Orleans or The
Village Vanguard in New York were the high points of my career.  I’m just here
in LA for the fun of it, you know?”
Gregory offers the sort of tight-lipped smile you’d dole
out to a wayward child and says, “Okay.  Let’s try something else.  I need you
to say something like, ‘Being on Music Nation is a dream come true.  It’s
the high point of my career.’  Do you think you could say that?  Or something
exactly like it?”
Each interview lasts close to an hour, and around midnight,
we still have 10 contestants left.  With cracker supplies long since depleted,
Gregory says, “Let’s save the final interviews for the morning.  I’m busy in a
half-hour anyway.  You PAs can clean up the equipment and prep it for transport
to the main stage.  Sandra and I are going to go check the talent communications
protocols.”
The next morning, Gregory and Sandra arrive separately in
the ballroom.  Gregory says to me, “Hey, go tell Sandra that she’s a piece of
trash and that I’ve been with hookers who’ve been more caring and
compassionate.  Tell her that.”
I walk across the room to Sandra, who is popping off the
plastic top of her take-out sushi lunch.  I deliver Gregory’s message and
without batting an eye, Sandra replies, “Last night, it took three hours of
teamwork to find Gregory’s —-.  Tell him that he couldn’t satisfy a woman with
twelve of what he’s got.”
I return to Gregory and say, “Sandra says—”
“I heard her!” Gregory snaps, “Now help me bring the
equipment to the theater!  We’re taping at 2 pm.”
The first contestant is the nervous blond pianist.  As she
wasn’t able to pack her piano, they provide her with a 20-year-old, electric,
5-octave keyboard.  She steps onstage and plays eight seconds of notes when the
judges stop her.
Lawrence Dawson says, “Is that supposed to be music?”
Another judge with bright orange hair who I don’t recognize
says, “You don’t really sound like you’re trying."
I ask Gregory, “Who is that woman?”
Gregory says, “That’s Alana Yeong.  The Beverly Hills
pastry chef.”
“Oh,” I say, trying to make the mental connection between
“pastry chef” and “music expert.”
Another judge, a woman wearing what looks like a red thong
for a shirt, says, “That sounded like a cross between Beethoven and a yapping
dog.  Your keyboard sounds horrible.”
Gregory whispers, “That’s Edna Ryle.  She was in 50
movies.  She was huge back in the 1970s.”
The contestant leaves the stage with glassy eyes.  Gregory
directs us to shove the camera and microphone right in her face.  He asks her,
“What were you thinking while you were out there?”
Her voice quivers. “I was thinking, ‘Play Chopin’s Nocturne
the same way that won me the Wyoming State Piano Championship title.’”
Gregory says, “Well, there’s a big difference between that
and here!  What went wrong out there?”
She says, “Nothing!  I didn’t even make it past the third
measure when they stopped me.  I played it fine up until then!”
“Well, our judges certainly didn’t think so!  Maybe we’ll
see you next year!”  Gregory turns to the next contestant.  “You’re up, Sammy
Poulja!”
Samuel Poulja strides onstage with his tenor sax as if he’s

planning to walk through a mountain.
He bows to the audience and begins his set.
About halfway through, Lawrence Dawson calls out, “That’s
enough,” but Poulja keeps going.
Edna Ryle says, “Mr. Poulja, we need you to stop.”
Poulja plays as if he doesn’t even hear them.
Alana Yeong says, “Mr. Poulja, stop your saxophoning
right now!”
Poulja’s music builds until it sounds like there are three
saxophonists playing onstage at once.  The stagehands blink the lights and
finally turn them off altogether.  Poulja finishes his set, bows, and walks
offstage before the judges can say a word.  The audience, without guidance from
the judges, doesn’t know whether to applaud or boo.
Lawrence Dawson adjusts himself in his seat and says, “That
was a colossal waste of time, right there.”
When I finally make it back home after the six-day shoot, I
find that I can’t agree more.