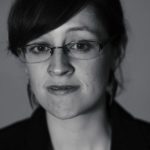 A young professional with a dark past agrees to participate in an art project for some extra cash, but ends up with more than she bargained for.

New England Connection: Entire cast and crew lives in New England; the only exception being Emily Holland, who is moving to LA in September.

Director(s) Bio:: Hugh Guiney has been directing, acting in, and shooting movies since he was three-years-old. Starting with superhero dress-up and toy dinosaur fights, by the end of the 1990s he had commandeered his mom’s video camera to shoot improvised stories with his brothers and friends. In 2005 he was admitted to ICA Boston’s FastForward program, where he created four shorts, two of which were accepted into the Reel Teens USA Film Festival in New York, and another of which has been selected for public screening by several curators, including PBS. Today he produces and directs films under his indie studio label, No Spoon Productions.