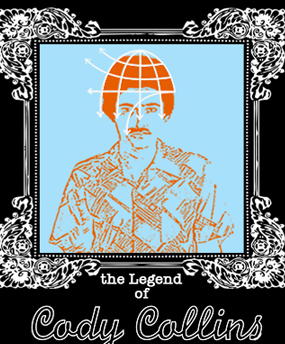 Josh and Seth Gass are young independent filmmakers who grew up in Bangor, ME and moved to Los Angeles to pursue their dream of producing movies.  They established the Shadow Puppets Entertainment company and produced their first feature film, The Mushing Mill (2004), for $100,000 in and around the city of Bangor.

Josh Gass started imagining a festival because he wanted a venue for his brother Seth’s 15-minute film The Legend of Cody Collins.   So he created the Bangor Film Festival, December 27-29, which boasted three shorts programs (and the premiere of Legend), one feature, two panel discussions, a 48-hour film competition, music with video jockey and a closing party.

To attend the festival I drove from Portland, ME to Bangor on a cold, rainy afternoon.  The streets in Bangor were quite empty and a construction cover shrouded the fabled Bangor Opera House, where the festival was being held, as the building undergoes some renovation.  Inside there was a very small crowd and the theatre was cold and dank.

Rob Draper, the founder of Vision Mill Studios, was in the theatre lobby waiting for the seats to fill for his discussion panel, “The HD Workflow in Film and Television.”  With about a dozen people in attendance he then proceeded to give a wonderful presentation with state of the art information like demonstrating the flexibility of controlling the response of a camera using onboard menus.  The four young filmmakers next to me in the first row acquired knowledge that will help them tremendously as they forge their filmmaking careers.

The next panel discussion was “The Maine Film Scene.”  I was on stage with Draper and the assistant director of the Maine Film Office, Greg Gadbury.  A lively discussion ensued as the three of us have distinct ideas on how to improve the Maine film scene.  Greg feels that it is all about money and film incentives; Rob feels strongly that if you build the infrastructure with progressive training with digital high definition film equipment, the need for incentives is minimal; and I feel that it is a combination of both, and that the film office needs to be more open and proactive in its communication with industry professionals and the legislators that vote on incentives.

As our panel discussion ended, I walked up the theatre stairs to the lobby where an energized crowd of people who braved the weather conditions, were waiting anxiously to watch and judge the 10 entries of the 28-Eighty Film Shootout film competition.

It is called the 28-Eighty Film Shoot because there are 2880 precious minutes in the 48 hours that the competitors have to complete their eight-minute film.  Every minute is important and the process helps the filmmakers to develop their creativity and resourcefulness under intense pressure.

For the next two hours we were entertained by a variety of films that had to incorporate a goofy 1920s tune titled Naughty Hula Eyes into the story they were telling on film.  The song had to exist in the world of the characters and at least one character had to hear it. You couldn’t take an easy path and just do a music video.

Like any film competition, some of the entries were great and some were a little lacking.  The overall winner was a hilarious film called I in which the lead character played by Ian Bagley has a split personality. Ian also won the award for Best Actor.

What all the films incorporated was inventiveness in the use of the resources that each film had at their disposal.  The solutions were fun to watch and the crowd applauded loudly for their favorites.  This is what film festivals are all about: learning new techniques, connecting with others in the industry and simply sitting back and enjoying the creative work of others.

What we often forget is that film festivals can become an important part of a local economy.  Of the six film festivals (including Bangor), held annually in Maine, the largest and most successful is Waterville’s Maine International Film Festival.  It receives a tremendous amount of support from the Maine Film Office, including a $50,000 grant from the Maine Department of Tourism in 2006.  I contacted the Maine Film Office to request information about Maine festivals’ economic impact but did not hear back.

The Bangor Film Festival doesn’t have a famous actor to back it and it certainly didn’t generate much more than a few thousand dollars to the local economy in its first year, but Josh and Seth Gass are committed to making it an annual event that will brand and promote the city and state that they love.