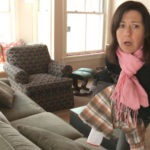 A realtor tries her best to keep a secret from her client while showing an important home.

New England Connection: Hardwood Throughout was made as part of the 2011 Green Mountain Film Festival Film Slam and was filmed in Milton, VT.

Director(s) Bio:: Smith’s 2008 short The Back Room, which screened on four continents in over 35 film festivals, won LOGO TV Channel’s The Click List Seasons 7 & 8, and was released by Wolfe Video in 2010 on the best-selling shorts compilation Boycrazy. Smith wrote and directed the 2010 horror short Remission, which won The Rhode Island International Film Festival’s 2010 Horror Film Award. Since September 2010, he’s completed three new shorts: the thriller Razor Burn, the mystery Violin Case, and the broad comedy Hardwood Throughout, all of which are just starting their festival tours. Other recent film projects include Pearl, directed by Frasier’s Dan Butler, and Respect for Acting, directed by Richard Waterhouse (both as Assistant Director and Script Supervisor). Smith is finishing two new screenplays: the character-driven Getaway, and the political-gay-zombie-horror-thriller More Brains. He lives in New York City with his partner of 15 years and their 10-year-old Boston Terrier, Olive.