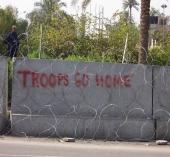 A Compulsion to Tell the Truth

Share
Andy Blood of the CT-based Wolf Gang Pictures lets soldiers tell their story of Iraq in My War, My Story.

Andy Blood lives a somewhat nomadic life at various homes in central Connecticut.  There he has a tight circle of trusted collaborators: his editor Carol Dykas, his composer Christopher John Curcio, his producer Dennis Rollins, an actor — Matt Sarno, and his brother Joe, an illustrator.

His more than 50 films (he’s lost exact count) include documentaries, shorts, and features.  He took some film classes at Cal State but says he really learned by doing, by reading, and by watching good films (and bad).  In his most recent project, a documentary about the Iraq War, Blood set up his camera and “let the men and women of the armed forces tell their stories.”  My War, My Story screened at the 2007 Woods Hole Film Festival, the Margaret Mead Film & Video Festival, and the Hartford International Film Festival, to name a few.  He recently spoke with NewEnglandFilm.com about behind the scenes of My War, My Story, and other projects in development.

Scott R. Caseley: How did this story of soldiers returning from the Iraq War find you?

Andy Blood: We got started with the Boston rally and a Gold Star Families’ event in Amherst.  After this, we decided to try to do a national piece that would just listen to the vets against the war on their home turf.

SC: What kinds of constraints did you give yourself in telling this story?

Blood: Mainly we needed to shut up and get out of the way of the vets.  I might have at first thought about a protest kind of doc, but once I heard some of these people talk, I realized the most effective thing was to just sit and listen to them.

SC: What specific challenges did you face?

Blood:  We applied for grants and were turned down, so it was mostly money issues.  Carol [Dykas, Blood’s editor] raised the cash, enough for us to travel down south and she later put me on a train out west.  Working without a crew is artistically pleasant.  There’s no space between you and the shoot, and so you don’t have to hope that it will later work– you can see and hear it come together.  But it’s very hard on the body — the combination of concentrating really hard and doing set-ups and worrying can take a toll.  John Huston’s advice to new directors was to “sit in a chair as much as possible.”  That makes sense to me now.

SC:  Have people always been supportive of you doing this project?

Blood:  Mostly it’s just me and Carol, keeping each other going.  We got vital help from Frank Corcoran of Iraq Veterans Against the War (IVAW) and Iraq vet Kelly Dougherty, who is now the head of IVAW.  Through them we met many of the vets.  Also, Dennis Rollins drove me around in Colorado and set up the interviews in Wyoming.  All of this was very important.

SC: Your movie spans the country, going from city to city, state to state, did you encounter different forms of resistance depending on where you were?

Blood: We got some unpleasant emails from a couple of folks in Wyoming.  There is still a general belief in some places that all vets come home and love the war, or any vet who hates the war hates America and the military.  As My War, My Story shows, this is simply false.  When the movie screened in North Carolina, an irate young man gave an earful to the host, former Marine Sgt. Jimmy Massey, who is in the movie.  He was upset that vets would be pro-military AND opposed to the war, which he found to be nearly unbelievable.  Jimmy calmly informed him that it was true.  The young man, to his credit, later apologized.  Jimmy, by the way, is a very courageous man who has taken a lot of heat and is someone I admire very much.

SC: What kind of budget did you have for this project?  How was the money raised?

Blood: The budget was raised by looking through sofa cushions for loose change.

SC: What kinds of things did you learn from this project?

Blood: I learned that there is a very real risk of psychological damage from either witnessing or participating in the killing of civilians.  This is an environment where, under huge pressure and high emotions, terrible things can happen.  What does that do to a young soldier?  From the Luceys and the Arredondos (both Massachusetts families who lost their sons) I learned that the impact of the war on families in terms of stress and grief is terrible, even if the vet comes home physically well.

SC: One of your subjects, Dave, went to war with the genuine and altruistic aim of helping people to live better lives and according to his reaction, what he found was so different, can you tell me what exactly what he found and how this changed his view?

Blood: Dave describes feeling for the Iraqi families who lost everything, standing in a pile of rubble.  It seemed to run counter to everything he was there to do — help the Iraqis to a better life.  He and his fellow soldiers wanted to help, but they didn’t know how to run a power plant or water facility.  They felt helpless.

SC: If so many people are against this war, why do you think that so many of them have volunteered to fight in it?

Blood: In this doc, some of the vets just enlisted for the college money.  The issue of economic disadvantage comes up many times.  One of the vets is still a recruiter, even though he’s against the war.  He told me that a young man of color has a better chance risking a tour of duty in Iraq, than staying on the streets of Hartford, where unemployment is so high.  I’ve heard people dispute this, but he might be right, simply as a matter of fact.  This is a depressing idea.

SC: Did anyone give his or her perspective of what they saw the typical recruit to be?

Blood: Jimmy Massey, a former recruiter, said that the typical person was unemployed or paid very little, had a pregnant wife or girlfriend, had no medical insurance, and had a pretty bleak prospect for getting good employment.  I met a few people like this. Of course, some people have other motives:  the earnest desire to serve their country, looking for some experiences or adventure, angry after the 9/11 attack, and blaming the Iraqis, etc.

SC: One soldier, Eric, talks about witnessing actions that led to the deaths of three generations of a family in a farming vehicle where the only survivor (a small child) is wounded, then healed, then thrown in prison.  Why did you feel this was such an important piece of the puzzle for your story?

Blood: Eric was really affected by witnessing that roadblock massacre.  He said he couldn’t believe what his eyes were telling him.  What does that do to someone?  I don’t think that you can just walk away and forget it.  If you can, that’s another problem!

SC: What is your next step in getting this movie to the people?

Blood: The film is still being considered by some distributors.  We just want to get it to an audience.  This is not just a movie about a hot topic– I think it will be relevant long after the war is (hopefully) over.  We screened it for some Vietnam vets and they were very quiet afterward.  Finally one of them spoke up and said, full of emotion, "It’s happening all over again."  The others just nodded.

SC: One final question about My War, My Story, can audiences in New England make plans to see it soon?

Blood:  There is supposed to be a screening in Hartford in January, I’m not sure what the date is or what the venue is, but people can look at www.mywarmystory.com, once we have the date and location established we will put it up there right away.

SC: You have a number of documentaries coming up soon, including one about the Connecticut witch trials which predate the Salem Witch Trials by 45 years, another about the lives of the homeless, what can you tell me about those and other filmmaking plans in the works?

Blood: The doc on the CT witch trials, which were the earliest in the New World, combines costumed monologues, costumed dramatic scenes, narration, animation, illustrations, a modern pagan celebration, and interviews.  I believe this will be the first doc on this subject.  The homeless doc is about folks living on the streets in CT with addictions, and also the weird and growing problem of homelessness of working people, mostly because of the insane cost of real estate.  When these are done we want to go back to our first love, feature films.

Blood:  I’m very much a compulsive filmmaker–I feel a lot of affinity with the town drunk or addict.  (With no job and few resources, the town drunk always seems to manage to get the job done).  We’ve completed nearly 60 pieces (short and feature docs and films) and I still feel like a beginner.  This is a deceptively difficult thing to do.  I have a particular style of camera work, which really annoys some people.  I greatly prefer natural or found lighting and I usually shoot at a slightly upward angle.  One advantage of the way I work is that I can get subjects really talking about their actual feelings–there’s no crew or a small crew, no set-up.  Soon, they almost forget I’m there.  I’ve actually seen some of our vets in other anti-war docs, where they seem very stiff and formal to me.  But, hey, that’s just what I like.