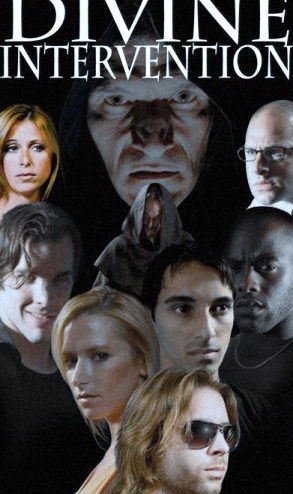 Share
Director Rufus Chaffee serves up a stew of humor, horror and a dash of spicy naughtiness with his inaugural feature, Divine Intervention, premiering this February.

What’s the antidote for a case of 20-somethings afflicted with small-town ennui, rampant hormones and too much time on their hands? If you’re "Father" Steve Reynolds, the drugged-out local looneytoon gone haywire, it’s a Bible, a crossbow and an affinity for imparting life lessons drawn from Survivor.

Divine Intervention, Rufus Chaffee’s directorial debut, beckons us to a familiar setting: small rural town, nothing to do, no one interesting to do it with. Each day looks much the same as the day before, that is, until one of the town’s denizens heeds a heavenly call appointing him to recruit soldiers into the Lord’s army. But the locals are much too committed to drinking, drugging and deflowering one another to pay attention despite "Father" Reynolds strident admonitions, which alternate between Old Testament rebukes and Survivor references. When nobody listens things get messy… and a little wacky.

Last spring Chaffee approached his long-time friend and colleague, Randy Barth, script in hand, advising Barth he was ready to make his first feature length movie. Chaffee, an Emerson graduate who makes his living as a videographer, has been captivated by filmmaking since childhood when he persuaded his second grade teacher to allow him class time to shoot a film.

Confident he could raise the financing for a feature, and with the upcoming summer free Chaffee was loaded for bear and wanted Barth involved. Intrigued, but determined not to sign on unless he was sold on the project, Barth put his pen through the script, rewriting it as a horror film. But the revised draft wasn’t the film Chaffee wanted to make. When Barth suggested turning the script over to Gary Trahan, a professional screenwriter whom Barth knew, Chaffee agreed. Both Barth and Chaffee credit Trahan with finding the humor in the script. "Things just jumped off the script funny," Barth said. "That was the piece that was missing." Barth was ready to commit.

Chaffee was able to raise enough money from friends and family to get underway. They posted ads on www.NewEnglandFilm.com and www.craigslist.com. Chaffee and Barth were overwhelmed by the caliber of actors who responded and experienced numerous "happy surprises". Barth remembers walking in halfway through the audition of Kevin Cirone, who plays bad boy Darren, and recalled, "My initial knee jerk reaction was this is a guy we’re not going to use. Well, son of a gun if Kevin didn’t become one of our best actors." Another surprise was Vic Clay, who plays the black-hooded, crossbow-toting "Father" Reynolds. "He came in character," Barth said. "And he left in character! Franchot (Lubin, Director of Photography) said ‘there’s no way!’ Vic scared the crap out of him." Cirone validates Lubin’s reaction.

"I’ve worked with Vic on a number of films, and to somebody who isn’t familiar with the real Vic, he can scare the pants off you. He’s just a little bit crazy. But without Vic this movie is nothing. He’s that unifying kind of figure." More "happy surprises" were in store from other actors who had little or no previous film experience. "They came out of nowhere on film," Barth said. "They ran with it. So many things fell out of the heavens for us. It’s amazing." Cirone was drawn to the project because of the script, which he said "popped off the page" and because his character, Darren, was a meaty one. Though he originally read for the part of good guy Jake, both Cirone and Barth agree his sensibilities as an actor best suit the hedonistic Darren.

When casting was completed Barth was so excited by the script and by the quality of the actors he decided to take the production up a notch and sought out more financing. He contacted a friend, Mark Beckley, who after reading the script and viewing some of the audition tapes, loved it and became the principal investor. Mark’s involvement enabled them to upgrade to a Panasonic VariCam HD camera and improve their lighting and grip equipment.

The film was shot last summer mostly in Ware, Massachusetts. Ware provides the small-town feel that is an essential ingredient to the lives of the characters. Because several of the actors had full-time jobs the daily shooting schedule began at 8 pm and went until 5 am, lasting three weeks. Needless to say, cast and crew were exhausted. "I’ve got to believe that a lot of our camaraderie came out of that, our shared exhaustion," Cirone said. "After shoots we’d get together and have drinks and talk and that was all wonderful and that’s how we came together as a family."

Chaffee faced the challenge typical of a first-time director: to resist feeling intimidated by his cast and crew. Not a forceful personality, he was aware he might have to fight for his vision in an arena where so many creative-types had ideas of their own. Adding utter exhaustion to the mix Chaffee encountered a moment of truth during the first week of filming. Shooting all night and barraged with phone calls all day, Chaffee’s normally high energy level was waning. "Everyday I thought about throwing in the towel, but on that Thursday it was the first time in my life I’ve ever woken up with absolutely no energy." He rallied himself by thinking about the people who had put their faith and finances behind his ability to deliver, and by projecting ahead five years to how he’d feel if he blew the opportunity he’d been given. At that point he resolved to do whatever was necessary to get the job done.

Barth and Chaffee were grateful for the support the cast and crew gave Chaffee, rising above the call of duty in doing what they could to help on set. Cirone, who is a software engineer by day, took on the additional role of associate producer to be used where needed. "We all gave a lot to this production and did not want to see it fail, so I took as much a hand as I could." He has worked on the website, arranged interviews, and pursued other marketing endeavors. "You do it for the love of the film. You do it because you want to see it succeed."

Barth considers remarkable the ease with which everything fell into place. "All of a sudden we’re shooting and then all of a sudden we’re done principal photography." Of course there were the inevitable snafus including running out of money, but Mark Beckley stepped in again. "I was amazed at how much we got done considering we’d never done it before. It’s a testament to the family he’s (Cirone) talking about. I’m looking at this group of people as if they had been together forever," Barth said. "I think there was a bond that happened and that’s where the magic happened. This could have so easily blown up in our face."

When shooting wrapped Lubin (DP) invited Barth, who hadn’t watched the dailies, to view some footage. Barth was blown away by what he saw. "That’s when I thought this is nuts! We really have something. For a week I was giddy. And I couldn’t tell anybody, because you couldn’t explain it."

Barth and Chaffee agree their producing partnership works because their abilities complement one another’s. According to Barth his highly organized approach balances Chaffee’s more creative sensibilities. Chaffee puts it this way, "I frame the house and Randy does the finish work."

The production team is currently working with Greenroom Productions to add the soundtrack, which Barth hopes will "add another character that will pull things out of the movie." They’re still considering how to best describe the film. Barth explained, "It’s not horror, it’s not comedy. It’s not cliché and it’s not spoof." They are submitting the film to festivals, but Barth’s primary goal as a businessperson is to sell it. "Will we all live if it never sells? Yes, we’ll live. However, it’s a good piece of work. It’s going to be great with the soundtrack added to it. And we deserve to be able to do due diligence and get this thing to the highest level we can. And then we can applaud and sip champagne."

Chaffee and Barth are already thinking about their next film, one of their own scripts or perhaps involvement in another filmmaker’s project. In the meantime they are adding the finishing touches to Divine Intervention and looking forward to its premiere in late February. And with a little continued divine intervention they’ll be putting that bottle of bubbly on ice.