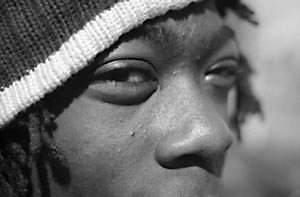 Roberto Arévalo’s 30-minute documentary "Understanding Violence" is about the problem of violence in Boston — why it happens and how it is dealt with. But, perhaps more importantly, it’s about the prevention of violence. Without preventing violence, the film’s youth and law enforcement officials agree, the cycle of crime and punishment continues, leaving crippled, incarcerated and dead kids in its wake.

Arévalo’s film and his organization The Mirror Project promote social and self-awareness through filmmaking. In particular, this project creates a dialogue between those impacted by violence in Boston, whether as perpetrators, victims, their families, police, lawyers or correctional officers. The film is introduced by one of its producers, local prosecutor and Chief of the Anti-Gang Unit, Raffi Yessayan. Having realized that he could spend a lifetime prosecuting people, watching them go to jail, seeing their families suffer as much as the victim’s and not really get anywhere, Yessayan became interested in violence prevention. This realization, and that of the film’s other representatives of law enforcement, seems a step in the right direction towards this goal.

Another voice in the film, Chief Justice Charles Johnson, of the Boston Municipal Court, recognizes that life in a rough neighborhood is hard. The problem of violence, he believes, is complicated, but often the choice for young people is unfortunately simple: a life of crime and incarceration, or something else. He sees society as having a responsibility– that it can not "expect good results" from this portion of the population who has been so disenfranchised by it — but that everything can not be blamed on it. Until it is more just, Johnson still advocates for personal accountability.

What is the alternative? Why do any of these kids chose a life in which violence has such a major and devastating role?

Roberto Riviera used to be in a gang. He said that he was surrounded by people who had a lot of money, cool stuff they’d gotten for very little. Without working eight hours a day, just hanging out in the neighborhood, Rivera discovered that one could get quite a bit. However he was locked up — hooked up to a breathing machine for one year in a hospital — before he got started. Just 16, Rivera was shot in the neck a few years ago; he is now wheel-chair bound and dependant on his mother who helps him get around. Thirty-four year old Ricardo Laidlaw’s beginnings were similar to Riviera’s, but his freedoms were restricted via incarceration. Being jailed a couple of times in his youth was not enough to scare him straight, he said. Instead, he used that down time to plan his future crimes, and he is now a federal inmate serving a 10-year sentence.

Arévalo’s film however does tell the stories of others who grew up in this environment, people who made the alternative choice. These voices remind of the struggle that involved — that doing the right thing wasn’t much easier — and that growing up in a rough neighborhood can also inspire a person to dedicate his or her life to public service. Police officers like Detective Ernesto "Tito" Whittington, and Vincent DiFazzio didn’t think in a million years this is how they would spend their lives. As a police officer today, Whittington brings to it his perspective — that without feelings of community responsibility — law enforcement is just opposite violence itself in a perpetually revolving door. Migdalia Iris Bruno grew up similarly — disadvantaged, poor without thinking to much or too highly of education. Today she is a student at Boston’s prestigious BC Law School, and like Whittington, she is proud of the unique perspective she brings to a community in which her experience is so different from most.

Another success story is Arévalo’s own: he grew up in Colombia, got himself to New York where he worked himself through the media program at Hunter College, learning his way around a video camera along the way. The Mirror Project, which he founded, is about changing behavior on a personal and public level through expression. His film’s subjects each make this conclusion — that without community, or policy, or education — it is harder to be aware and easier, as Laidlaw put it, to "get off at the wrong exit" in life.

"Understanding Violence" will be screened as part of Film Program 12: Local Documentaries in the Tower Auditorium at Mass Art on Huntington Ave., Sunday August 22, at 11 A.M.