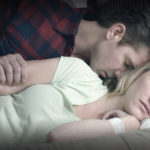 When Brenda and Phil make the devastating decision to take their newborn daughter off life support, they must retreat to separate corners to grieve. Once Brenda gets the go-ahead to try again, they come out fighting, wondering if they can retrieve the trust and courage they once had together to take another chance on building their family.

New England Connection: "UnSpoken" was inspired the true story of Vermonter Sandra Gartner, who wrote about her experience in the article "Exploding the Baby Myth" for "Lady's Circle Magazine". A longtime resident of Vermont, Sandra is a former president of the Vermont Film Commission and currently is co-producing director of Vermont Actors' Repertory Theatre. "UnSpoken" was shot entirely in Vermont and utilized both actors, crew and support services from the southern Vermont area.

Director(s) Bio:: Todd Sandler, the director of "UnSpoken" was originally recognized for his abilities as an editor. After editing a film tribute for Steven Spielberg, the famed filmmaker complimented Sandler after he saw the reel. Spielberg told Sandler that know one else had ever gotten him. He also announced to the audience "everyone should be working with Todd Sandler." Good to his word, Spielberg hired Sandler to edit the trailer for his film "War Horse". He also most recently finished a piece for Warner Brothers.