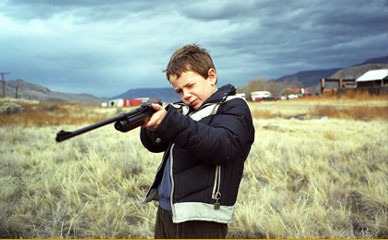 Share
Reviews of the outstanding films from the 2004 Independent Film Festival of Boston.

The film festival is a strange beast. In theory it represents the cinephile’s dream: days of films from near or far, directors up close, and that magical possibility of discovery. In practice, unfortunately, these events consistently get bogged down in technical snafus and logistical emergencies or put glamour and glitz before quality and craftsmanship. Maybe this truism is why the 2004 Independent Film Festival of Boston was so impressive: it lived up to its promise to present a wide array of superb films without the requisite chaos.

Kudos to the organizers of the festival, in particular executive director Jason Redmond and programmer Adam Roffman. Redmond’s careful attention to detail kept the event running smoothly. Roffman’s eye proved meticulous in terms of both artistic merit as well as the overall balance of the festival’s offerings. All three festival categories were strong, with the documentary program as the best. What follows is merely a sample of the outstanding.

"Flower & Garnet" (dir: Keith Behrman) won the Grand Jury Prize in the narrative category with good reason. "Not a plot-based film," according to Behrman, "Flower & Garnet" is a laconic family study set in rural British Columbia. The title refers to the sister and brother who live with their widowed father. While the story’s basic situation might provoke a lesser director to showcase cheap histrionics, Behrman’s camera proves precise and understated, without ever turning cold. Like a cross between "The Red Desert" and "You Can Count On Me" the film combines a European aesthetic with a North American sensibility; every shot has its own symmetry and logic. Behrman’s debut feature film promises fine things to come for the Canadian director.

"The Baroness and the Pig" (dir: Michael Mackenzie) is one of those odd little pictures that both tickles and disgusts; it’s films like these that are essential for a well-rounded festival. The baroness is an American ex-pat social climber whose marriage to an English aristocrat lands her in Paris. She resolves to "educate" an enfant savage with the intention of presenting her at a dinner party. More "Kaspar Hauser" than "Wild Child," Mackenzie’s directorial debut turns into a deliciously grotesque parody of the genre, mercilessly roasting the pretensions of the self-declared arbiters of "culture."

John Landis’ first documentary "Slasher" is a digital video foray into a lot of used Toyotas in Memphis.  There we meet the eponymous self-proclaimed "greatest living used car salesman in the world," a journeyman mercenary who takes over struggling automobile dealerships for a weekend with promises of huge profits for all by drastically reducing prices and thereby drumming up sales.  Behind the posturing, however, is a chain-smoking dipsomaniac who, based on his wife’s frantic cell phone entreaties, should be spending more time with his family and less time in strip clubs.  Landis’ quick cutting and ironic montage make this film feel more like "The Office" than "60 Minutes"; in the end, nonetheless, The Slasher’s hard living takes a turn for the tragic.

Traveling from Tennessee to Tanzania we meet Pete O’Neal, the subject of "A Panther in Africa" (dir: Aaron Matthews).  O’Neal, a young leader of the Black Panther party in Kansas City of the late 1960s, fled to the African country in 1969 to escape gun charges.  He has lived there in exile ever since, leading a community of volunteers who work to improve the lives of the locals.  Intercutting newsreel footage of O’Neal’s often incendiary comments from the civil rights era, Matthews depicts a man caught in a border zone.  O’Neal struggles to come to terms with his violent past in America as well as a present in Africa marked by instability and disease.  Although he longs to return to his home country, O’Neal eventually accepts — if nothing else because of legal contingencies — Africa as his new homeland.

With Kenneth Browser’s "Easy Riders, Raging Bulls" we move both from Tanzania to Tinseltown and from the sublime retrospection of "A Panther in Africa" to recollections of sordid affairs and backroom dealings.  Based on the best-selling book by Peter Biskind, the film looks back on the period of American filmmaking from the late 1960s and early 1970s known as "New Hollywood" — a loose movement of maverick directors making low-budget art films that produced a small cinematic revolution.  Although in subject matter similar to the recent "Decade Under the Influence," in sensibility the two couldn’t be any more different.  "Easy Riders, Raging Bulls" takes its cue much more from gossip columns than film school textbooks, contextualizing the movement within a "social" history of parties, sex, and drugs: the featured interviews with Roger Corman, Peter Fonda, Dennis Hopper, Peter Bogdanovich, and others focus more on romantic couplings and on-set fights than lens sizes or camera angles.

The rockumentary "Dig!" (dir: Ondi Timoner) ups the ante on bacchanal lifestyles in its chronicle of two LA bands from their inauspicious beginnings to their rise to international fame.  Seven years in the making, Timoner follows the bitter and often bizarre rivalry between Anton Newcombe, singer/songwriter of the Brian Jonestown Massacre, and Courtney Taylor, frontman for the Dandy Warhols.  Narrated by Taylor, "Dig!" increasingly hones in on the Brian Jonestown Massacre’s intra-band feuding and the center of the tumult, Newcombe.  Although clearly gifted, Newcombe’s heavy drug use and otherwise unstable behavior eventually destroy the band.  As lopsided as the film’s tone may be, "Dig!" is at top form in its sensitive exploration of pop music’s fickle nature: the success that the Dandy Warhols have enjoyed could just as easily have been the Brian Jonestown Massacre’s.

"Deadline," an investigation of the death penalty in America, explores questions of contingencies in a much more sober way.  Directors Katy Chevigny and Kirsten Johnson weave together interviews with former death row inmates wrongly convicted and those prisoners currently awaiting execution and conversations with politicians, crime victims and family members, and prison wardens.  In particular they follow the course of the death penalty in Illinois, where Governor George Ryan, a longtime capital punishment proponent, eventually decides to grant blanket clemency to all death row prisoners statewide.  Gaining privileged access to the 2002 Illinois clemency hearings, Chevigny and Johnson present a timely political statement on one of this country’s most pressing issues.

Three short films made an indelible mark at this year’s festival.  Nirvan Mullick and Benjamin Goldman’s kinetic "The Three of Us" combines stop-motion animation with cut-outs, film scratches, and found objects.   Although surely influenced by Tim Burton, the three-minute experiment also takes cues from the paintings of Egon Schiele and the works of Salvador Dali.  Scott Calonico’s "LSD a Go Go" is equally hallucinatory and yet does manage a coherent narrative.  Its tongue-in-cheek conspiracy theorization combines FBI archive material with footage from anti-drug "educational" films starring Sonny Bono.  In a format too often fraught with dilettantism and pretension, Mullick/Goldman and Calonico buck the trend.