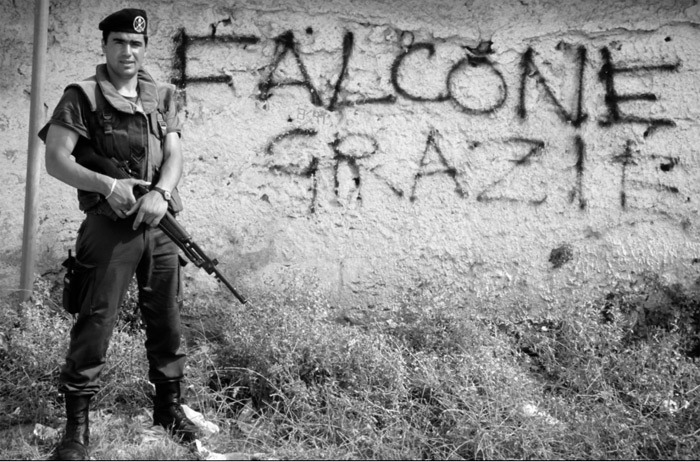 Share
Governed for decades by stealthy intimidation and invisible threats, the people of Sicily finally united to wrench their community from the iron grasp of the tyrannical Mafia. John Michalczyk's new documentary 'Killing Silence' explores the devastation and valor left in the wake of a social revolution, a battle of good versus evil.

Most people associate organized crime with what they see on television or in the movies; greasy mob bosses stuffed into Italian suits, rats getting whacked, Marlon Brando making offers no one can refuse. But the reality of the Mafia is a far cry from the worlds created by Francis Ford Coppola and Martin Scorsese.

The Mafia has centuries’ worth of roots embedded in Sicily. This concept of brotherhood originated as a protection society during the Spanish occupation of Sicily, and eventually evolved to include legitimate business endeavors, extortion, illegal gambling, and the development of prostitution rings. The crime organization was able to infiltrate and manipulate social and economic structures, coercing "protection money" from hard-working business people and using carefully finessed connections within the legal system to avoid prosecution. For decades, the people and businesses of Sicily were ruled by this omnipresent monarch, silenced by fear, watching as beloved public figures were murdered, manifest examples of what happens when people cross the mafia.

In the 1980s, the government began to crack down on organized crime, infiltrating the businesses who cooperated with the Mafia and uncovering members of crime "families". Still, vicious murders continued, each more brazen than the last, and the public kept silent, terrified to suffer the consequences of crossing the Mafia. The government, however, kept up their investigation, kept making arrests. It was the 1992 homicides of two leading prosecutors, Giovanni Falcone and Paolo Borsellino (who spent years battling the mafia and over-seeing several high profile arrests of organizational members), that propelled the people of Sicily into action, determined to step out from under the guise of fear and reclaim their community.

Documentary filmmaker John Michalczyk (Etoile Productions) explores the revolt of the Sicilian people in his latest film Killing Silence. Michalczyk, Chairman of the Fine Arts department at Boston College, is a seasoned documentarian, having directed and produced more than a dozen films, each of which explores conflict prompted by social discord. His subject matter has included the thriving of apartheid in South Africa, the caustic civil war between the Bosnian Serbs and Croatians in Yugoslavia, triumph over physical and mental disabilities, political prisoners in Northern Ireland, and contemporary interfaith issues. Several of these films are part of a series that, conducted in partnership with the Boston Theological Institute, addresses conflict resolution between and within several different world regions.

Sara Faith Alterman: You’ve made many films that address racial and religious conflicts, both domestic and international. What inspired the production of a film about the Mafia?

John Michalczyk: I think that most of my films have religious or political themes, probably because those are the two intersections of my own life. I was in the Jesuits for about twenty-one years, and was a priest for eight. In 1982 I left the order to marry, but still kept up my interest in religion and I’ve always been politicized in many ways. So I incorporate those two areas into my own studies and my own film work. I study especially the positive implications of how religion can help society, but also look at it as a double-edged sword; where it can be a major hindrance.

A couple of years ago, a heroic figure, Leoluca Orlando, former mayor of Palermo, met with one of our [Boston College] benefactors. He brought with him a very positive message about how Sicilians are taking back the streets, how they were redeeming their culture, and it would be great to have a film about it. So the benefactor suggested this, and we started filming on location. Our idea is to fit it into the conflict resolution series, by showing what the traditions Mafia war was, and how it ruined the lives of the Sicilian people, physically and concretely, but also the fear they put into the hearts of people. We decided that we would focus on the history, but secondly, how these people follow their courageous leaders in uniting against the Mafia.

SFA: Although it sounds as though the film actually came to you, how difficult was it to find characters for the film? Is it dangerous to speak so openly against the Mafia?

Michalczyk: We relied heavily on Leoluca’s organization, called the Sicilian Renaissance Institute. They were able to pinpoint who the key people were that would be good to interview. These were all individuals who knew something about the Mafia, whose lives were touched by the Mafia, and we were able to get a sense of how their minds and hearts were controlled through fear.

In the film, you see Libero Grassi, a business man who felt that if everybody stood up against the Mafia as a united community, there would be no problem. But, he stood up, and everyone else turned cowardly. As a result, he was killed.

Right now there are many outspoken individuals, including Leoluca, and when they celebrated the tenth anniversary of the killing of Falcone and Borsellino, there were thousands and thousands of people who came to demonstrations, eager to fight the Mafia. So the fear has abated.

SFA: How is the Mafia in Sicily different from the existing Mafia in the United States?

Michalczyk: The model for the American Mafia came from the Sicilian Mafia, and especially the same code of honor, the code of silence, and the way it does business. There are parallels between the Mafia "families" in the U.S. and Sicily; the family models are the same. What is very interesting is that Rudolph Giuliani, as prosecutor in New York, had the same kind of attitude towards the Mafia as Leoluca Orlando. The attempts to infiltrate and destroy the Mafia here in the U.S. was similar to what was happening in Sicily; following the money trail, spying on weak family members. I think in both ways, the backs of the Mafia were broken. What is also interesting is that today Giuliani is working with Leoluca in Mexico, trying to break the back of the same kind of corruption and power in the underworld there. Leoluca is using the same model to infiltrate organized crime in Colombia.

SFA: The public has been exposed to a lot of stereotypes about the Mafia, through The Sopranos, and the work of feature filmmakers like Francis Ford Coppola or Martin Scorsese. How is the reality of organized crime different from the glamorized version audiences see on screen?

Michalczyk: With films like The Godfather or Goodfellas, the element of truth is that there does exist this underbelly of society that has a lot of power and control, that works and operates clandestinely through fear and blackmailing. Those ideas come up in the stereotypes, but they are more simplified. When you look at the real image of the Mafia in Sicily, you’re going to find a ruthlessness that has developed with killing off not only each other, but high profile figures; priests, politicians, prosecutors, as well as men, women, children. This ruthlessness can completely destroy the fabric of society. I think the media stereotypes gloss that over.

SFA: What were you surprised to learn in the course of making this film?

Michalczyk: The complete disregard for civilian casualties in the Mafia wars. And the stakes of the Mafia; they would kill leading politicians, priests. I was shocked that they would risk the animosity of the people, because the people see the victims as representing them, and when those public leaders are killed, it exhibits a complete disregard of life.

SFA: One of the most powerful moments in the film is the footage of the Pope, speaking so vehemently against organized crime. Such unscripted passion is highly unusual for a public figure, but most especially for the Pope. Does the Catholic Church still take an active stance in opposition to the Mafia?

Michalczyk: It’s a little quieter now, but I think it [the church] doesn’t have to be as vocal today. But there was actually silence at first. Some people often suspected there was collaboration between the Catholic Church and the Mafia in the early stages. But since the death of the prosecutors, everything has been much more open in challenging the Mafia. It is done on a daily basis, with people like Father Gorell (a character in the film) who worked in a proactive way by teaching, in Leoluca’s program, the evils of the Mafia to children, teaching that it shouldn’t control the lives of their culture of their families. I think it’s more laying the groundwork early on so that kids have a different type of attitude towards the Mafia. I see the church effectively playing a role in that way. Continuing its same fight, but maybe less vocal and more concrete in terms of the day-to-day scenes.

SFA: What inspired you to become a filmmaker?

Michalczyk: I had been interested in film since 1959, 1960. I was at the University of Scranton and there was just an interest there in looking at films seriously. I decided to continue on my interest in literature and language and film, so I incorporated all of that into my doctoral studies at Harvard from 1969-1972. I worked on French film and Spanish film, and did my doctoral dissertation on the Spanish civil war in art, film, and propaganda. When I finished there, I was still very much interested in film. I came to Boston College in 1974; I wanted to teach film, but there was really no apparatus for it yet. When I got a spot in the Fine Arts department I started to teach film studies, and at one point I decided that I wanted not only to teach about films, but to make them. I made some short films in the eighties. The turning point came when, in one of my classes, we were doing something on Christian and Jewish scriptures. One of my students asked about why, in the first semester, we treated the Jewish figures (such as Abraham and Isaac) as the heroes, but in the second semester they became the villains, with Christian anti-Semitism. That idea actually became my first film, called "The Cross and the Star; Jews, Christians, and the Holocaust". I think that was the beginning of a professional career in filmmaking. I did four films with Jewish themes immediately; my background isn’t Jewish, though. I started to look around for other topics, and then became very much involved with conflict resolution themed films.