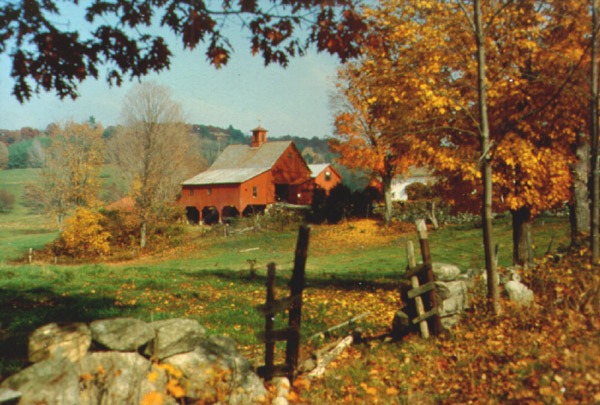 When most people think of New Hampshire, they think of small, rustic country towns, autumn foliage, and no sales tax. And those are exactly the selling points that Jay Brenchick, head of the energized New Hampshire Film and Television Office, is trying to get across in a concerted effort to bring more film and TV production work to the Granite State.

Though Concord is not yet Hollywood East, Brenchick is getting the word out to the Hollywood studios that the state is open for business: Come one, come all, and come often. Bring your actors, your movie scripts, and, especially, your productions.

Whether shooting for a classic New England "look" or trying to do a 16th century English countryside on the cheap, the New Hampshire Film and Television Office believes the state has it all and more. And their self-proclaimed "hassle-free, tax-free" economy? Well, that doesn’t hurt either.

Working out of the offices of the Department of Resources and Economic Development, Brenchick is a one-man band of sorts: tooting New Hampshire’s horn as salesman, concierge, local liaison, and a voice at the other end of the phone. (When asked how many people work in his office, he replied, "It’s me!") He has to juggle all of these duties because, according to Brenchick, prior to his arrival a year and a half ago, New Hampshire’s Film and Television office was an office in name only. From its inception in 1998, the "office" was merely an un-staffed arm of the Division of Travel and Tourism Development. But with Brenchick’s arrival, there was finally a person to deliver the message and man the phones.

Brenchick’s first order of business? He started a grassroots marketing campaign, he said, to renew interest in the state as a production destination. He knocked on Hollywood’s front and back doors, made cold calls, and sent out location reports featuring the best of his state’s natural assets. His mission became to remind the film and TV production world that New Hampshire existed, that there were actual benefits to staging productions there — in addition to that "hassle-free, tax-free economy" thing. Over time, Brenchick observed, he had to make fewer and fewer calls because his phone started ringing more and more.

Though it hasn’t been easy, Brenchick sees a change for the better.

More and more documentary, television, and independent and studio productions are inquiring about shooting in the "Live Free or Die" state. Though there have been no recent studio-backed feature film projects coming to NH, he is hopeful that his efforts will start to yield more results. By the end of the summer, he said, he will have a full locations database up and running on their Web site, which will allow him to more easily market the state. He also plans to turn his grassroots marketing efforts up a notch via a more aggressive e-mail campaign.

"I think overall, in our whole region, our prospects of bringing in projects is improving" despite the slow economy, Brenchick said. In recent months, a major network television project came to the state. David E. Kelley Productions shot the pilot for his upcoming CBS drama "The Brotherhood of Poland, NH," to be aired this fall. Over the years, the number of productions shooting wholly or in part in New Hampshire has been limited — among them a recent music video, "Jumanji," and commercials for pasta and bath gel.

But people, he said, have their doubts about New Hampshire. He still spends a good portion of his time explaining to the geographically challenged that New Hampshire is not that far from Boston — or New York City for that matter. Despite the state’s lack of rental houses, Brenchick trumpeted their small, but dedicated base of professional film and television production people — gaffers, grips, and electricians, among other experienced workers.

While studio-backed feature film work would bring the state its biggest windfall, an important part of that equation is the work it would bring to the local production community. However, he pointed out, even when a production brings their own out of state crew, they stay in New Hampshire’s hotels and eat at their restaurants, which benefits that sector of the economy.

With everything that is at stake, it makes one wonder whether competition between the various New England state film offices is cutthroat.

It’s not, Brenchick said. "We stay in pretty close contact with the Vermont and Maine Film Offices." He believes that it is much easier to promote film and television productions as a region rather than on a state-by-state basis. Whether a project is shot in New Hampshire or Massachusetts, he said, the crew for those projects come from all over New England. Or it might be shot on location in both states, given their proximity.

Virtually every state in New England, for example, boasts that "The Cider House Rules" was shot in its own backyard. And they’re all right, Brenchick said. "I think all the states need to work together because our economies are so tightly interwoven." With that in mind, Brenchick was "disappointed" to see the Massachusetts Film Office close due to budgetary cutbacks in July 2002.

Is Brenchick worried about the future of New Hampshire’s own revitalized Film Office? "I think it’ll be around for a while," he predicted. The Massachusetts Film Office, he pointed out, was a standalone office that became a convenient budget victim in tough times, whereas the New Hampshire office’s budget is tied into other agencies through the Division of Travel and Tourism Development.

While it may be some time before New Hampshire becomes a mecca for film production in New England, Jay Brenchick is positioning it for success. After all, at the end of the day — despite the vagaries of production plans — New Hampshire’s towns are still quaint, its forests still full of leaves waiting to turn, and its tax laws still generous. Not a bad combination.