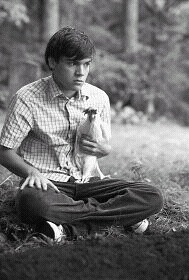 Share
A report back about the New England films featured at the 2003 Sundance Film Festival and the other fests that have cropped up in Park City.

Park City was packed this year. After last year’s lower attendance due to concerns over terrorism and schedule changes to accommodate the 2002 Olympics, attendance at the 2003 Sundance Festival was at a record high. An estimated 20,000 people plus descended on the tiny town to view 125 feature-length films and 60 shorts that comprised this year’s festival line-up.

The Sundance Festival program was also packed with films (and a panel discussion) with a New England tie. Even if you didn’t manage to get to Park City this year, hopefully you will get a chance to see many of these extraordinary films with a New England connection in the theater, online, or perhaps on your own TV…

Three dramatic features enjoyed New England ties at this year’s Sundance Festival. "Levity" kicked off the festival with a screening on opening night. Written and directed by Ed Solomon, originally of Sudbury, MA, the film tells the story of ex-convict Manuel Jordon who is released from prison after two decades. Holly Hunter, one of the films stars and this year’s recipient of the Sundance Institute’s Tribute to Independent Vision, describes Ed Solomon as "a natural writer." The current theatrical release date is set for early April 2003.

"The Mudge Boy," is the first feature by Michael Burke, who grew up in Rutland, Vermont. Burke’s short film "Fishbelly White" won a Special Jury prize at the 1999 Sundance Film Festival. Set in rural Vermont, "The Mudge Boy" is a fascinating portrait of Duncan Mudge, a teenage boy coping with the death of his Mother. No release date has been announced yet.

Adam Roffman, a Boston resident whose film "The Invisible Man" screened at Tromadance 2002, worked as the on-set dresser for the film "Camp." "Camp" takes place at Camp Ovation, a summer camp for young singers, dancers, and actors. The film, which was selected for the dramatic competition, is scheduled to have a theatrical release in September 2003.

There was an abundance of high quality non-fiction films at Sundance this year, many of which had a connection to New England. Anne Makepeace, originally from Connecticut, returned to the 2003 festival with "Robert Capa: In Love and War." The film is a revealing documentary about the famous war photographer Robert Capa. Don’t miss it on PBS May, 28,2003. For more information, visit www.pbs.org/wnet/americanmasters/database/capa_r_homepage.html. A Sundance veteran, Makepeace’s film "Coming To Light," premiered at Sundance in 2000, and her film "Baby it’s You" premiered at the 1998 festival.

"The Same River Twice," directed by Harvard University film professor Robb Moss, shows 16MM images of a river trip that the director took 25 years ago with his fellow river guides, coupled with current digital video footage of the lives of five of these guides. According to the Moss, "the film explores bodies, time, and living with one’s life choices." Karen Schmeer edited "The Same River Twice." Schmeer has also edited documentaries for Boston filmmakers Errol Morris ("Fast, Cheap & Out of Control" and "Mr. Death") and Lucia Small, whose film "My Father the Genius" won Best Documentary at the 2002 Slamdance Film Festival. "The Same River Twice" will be screened at the Harvard Film Archive on February 20, 2003, and is currently scheduled to screen at the Museum of Fine Arts Boston at the end of March. Visit www.samerivertwice.com, www.harvardfilmarchive.org, or www.mfa.org for more details.

"Brother Outsider: The Life of Bayard Ruskin," by Nancy Kates and Bennet Singer is an enlightening film about the little known civil rights activist, pacifist, organizer and advisor to Martin Luther King. Appropriately the film was shown on PBS on Martin Luther King Day and will hopefully be re-broadcast on August 28, 2003 — the 40th anniversary of the March on Washington, which Ruskin organized. Kates and Singer are both graduates of Harvard University class of 1986. Kates grew up in Lexington, MA and Singer worked on the "Eyes on the Prize" series while at Blackside Media in Boston, MA.

Two other documentaries with ties to the New England area are "The Boys of 2nd Street Park," and "The Pill." "The Boys of 2nd Street Park," directed by Dan Klores & Ron Berger, looks at how the lives of six men have changed since their childhood in the 1950’s filled with days of playing at the 2nd Street Park, in Brooklyn, NY. Drugs, The Vietnam War, illness, and many other events greatly affected the lives of these individuals. Three of the six men now live in New England. Steve Satin is a chemical Engineer living in Lynn, MA. Brian Newmark, who graduated from Harvard, now lives in Lincoln, MA and Bernie Bandman lives in Bennington, VT. At the moment, no release date is set for the film.

"The Pill" is look at the development of one of the world’s most controversial and important drugs. The tiny little birth control pill, which revolutionized many women’s’ lives, was created in Massachusetts. This fascinating documentary by Chana Gazit and David Stewart is part of WGBH Boston’s American Experience series and will air on February 24-25, 2003 on WGBH 2 and 44. See www.wgbh.org/schedules/program-info?episode_id=831720&program_id=24238 for more details.

"From the 104th Floor" is a powerful animated short about woman trapped in the World Trade Center on September 11, 2002. The film is based on a poem written on September 29, 2002 by 14-year old Leda Rodis from Sharon, VT. Leda’s mother Karen Gocsik was so moved by the poem that she contacted Serguei Bassine to direct a film based on the poem. Gocsik and Bassine collaborated on the short "Because of Moma," which screened at the 2001 Sundance film festival. There will be a screening of "From the 104th Floor" at Dartmouth College in Hanover, NH on February 5, 2003, and it may air on Vermont Public Television as well.

Massachusetts born Illeana Douglas is well known for her acting in movies such as "Happy, Texas," "Grief," and "Search and Destroy," all of which have screened at past Sundance festivals. This year Douglas returns to Sundance with "Devil Talk, " a short film she directed about the Devil’s search for a publicist. No word on a future release date yet.

Brian Papciak and Jeff Sias met while working at Olive Jar Studios, a Boston based commercial animation studio, which closed in 2001. Their 16MM short "Met State," which was selected for the Sundance Online Film Festival, is a unique look inside Met State, the abandoned insane asylum in Waltham, MA. Please visit www.sundanceonlinefilmfestival.org/shorts01_03.html before February 5, 2003 to view the film. To learn more about the filmmakers or the film please visit www.handcrankedfilm.com.

"Circle of Stories," created by Hank Rogerson and Jilann Spitzmiller was also selected for the Sundance Online film Festival. The series of stories highlights the tradition of Native American Storytelling. One of the four stories, "Rabbit’s Wish for Snow," features Tchin, a Native American Man who learned the art of storytelling from Princess Red Wing, a famous Narragansett woman. Tchin has spent a lot of time learning about his Narragansett culture, and he studied at Rhode Island School of Design and Brown University. To view "Rabbit’s Wish for Snow" visit www.sundanceonlinefilmfestival.org/new_forms01_02.html until February 5, 2003, or go to www.pbs.org/circleofstories.  To learn more about Tchin visit www.tchin.net.

Judith Helfand returned to Sundance this year, but not with a film. She was a panelist on a discussion at the Festivals House of Docs entitled "Decent Exposure: Maximizing Your P.R." Helfand, whose films "A Healthy Baby Girl," and "Blue Vinyl" were both selected to screen at past festivals, contributed helpful information to the discussion. When possible, she encouraged filmmakers to find a local link wherever their films are screening. For example, before "Blue Vinyl" screened at the 2002 Sundance Festival, Helfand discovered that PVC was being burned in Layton, Utah, not far from Salt Lake and Park City. She made the connection and the film received local press & created even more awareness about the horrid effects of PVC.

Helfand came to the panel discussion armed with the necklaces with blue vinyl pendants (bits of her parents former vinyl siding cuts into squares hanging from a beaded Mardi Gras style chain) that were handed out after last year’s screening — another example of how to maximize your exposure. This piece of marketing has proved particularly effective since you can’t throw it away safely. A warning label reads "This is Vinyl. Don’t Burn it! And don’t throw it away! WARNING: manufacturing vinyl creates dioxin and other chemicals that can cause cancer and harm fetal development." For more information about the film or to purchase a copy visit www.bluevinyl.org.

Record numbers of people also attended the various festivals that have sprung up around Sundance.  Slamdance, Slamdunk, NoDance, Tromadance, X-Dance were all packed with festival goers eager to see independent films. This year there were not nearly as many films at these festivals with ties to New England, however, one short film called "Little Hearts" made a big splash at Slamdance.

"Little Hearts" is directed by Stephen T. Maing, a resident of Jamaica Plain, MA. Maing taught summer youth programs at the Boston Film & Video Foundation (BFVF) and at the Cambridge Community Arts Center. He said his idea for the film grew out of watching some of the videos his students produced, which he describes as "raw and sloppy and great… I attempted to do something marginally as honest." People who attended the screenings at Slamdance thought he accomplished his goal — the film about a young boy who develops an unexpected friendship while staying at his grandmother’s apartment won the Audience Award for Best Short. "Little Hearts" will be shown at the New England Film and Video Festival at the end of March 2003. Please visit www.bfvf.org/festival/index.html for further details.

Coming to a theater near you …

There were so many fantastic films screened in Park City this year that were by New England filmmakers and/or filmed in New England. Fortunately we can view some of them online now and will be able to see many more of them soon.

Thanks to a new initiative by Robert Redford, the founder of Sundance, the Sundance Film Series will be launched in Fall 2003. The series will show four independent features exclusively at Loews Theater locations in 10 cities including Boston. Slamdance has been going on the road with films from their festival for several years now, and they will hopefully find their way to New England in the near future as well. Clear some space on your calendars indie film enthusiasts — not only for great films from New England, but for more terrific independent fiction and documentary works from across the country coming to a theater near you soon…