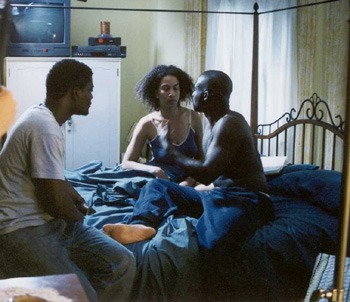 Share
Kona Khasu and Lisa Simmons bring harsh reality to light in their short film, 'Hunting in America,' screening at the Roxbury Film Festival this month.

Kona Khasu leans into the microphone, eyes shining behind intellectually trendy specs, and says, "Thank you very much for this opportunity and thanks to everyone who worked so hard to make this real, and special thanks to my brother…"

He stops for a moment and looks up. He grins — a smooth dead-ringer for a young Samuel L. Jackson — and then continues, spouting off thank-yous like a kid on Christmas.

Is he practicing for the Academy Awards? Rehearsing for a "Today Show" stint? Nope. He’s sitting in a Beacon Hill coffee shop, talking about his latest endeavor, "Hunting in America," and how after several years, a move home from L.A. and a filming schedule that commenced on Sept. 11, it all came together.

If the names Kona Khasu and Lisa Simmons don’t ring a bell, then pay attention, because they’ll be a force to reckon with once "Hunting in America," a mystery-cum-political statement about racial profiling, hits the festival circuit. First up: The Roxbury Film Festival, August 15th to 18th.

Khasu always knew he was going to write. His father was a West African playwright, and he grew up in the theater. But it wasn’t until he saw Spike Lee’s work in the late ‘80s and early ‘90s, that cinema seduced him.

After getting his master’s in screenwriting at Boston University, his first script, "Terminal Island" placed second in a Writer’s Guild competition. "Nat Turner," his second script, went to Sundance.

Then in a turn of events kissed by Hollywood, Darnell Martin, the writer/director of "I Like It Like That," and episodes of "ER" and "Oz" got his script to the head of Will Smith’s production company, yes, that Will Smith, and Khasu worked for him as a "writer for hire," living in the L.A. limelight for four years.

"It’s hard to talk about myself," Khasu concedes. "I think there are people who say that I’m a pretty good writer," he slouches shyly.

"Kona is an incredible writer," Simmons asserts, trampling his modesty. She is pretty without a lick of makeup, and punctuates her thoughts with enormously expressive eyes.

"He’s a brilliant writer. Will Smith knows that. We all know that," she says matter-of-factly.

At the same time that Khasu was scripting his career, Simmons, who has been acting in Boston for 10 years and producing independent films for five, was feeling fed up with the lack of roles for people of color.

It became all too apparent that the film community was fragmented when it came to minority talent.

"I said, look, we need to put together a collaborative for people of color to get together, whether they’re writers, producers, actors or directors," she explains.

So she partnered with Michael Trent, and pioneered The Color of Film Collaborative in 1998.

Of course, Trent was Khasu’s best buddy from film school, and thus, Simmons and Khasu got along swimmingly.

Simmons moved away from acting to get her master’s in media arts at Emerson College, which satisfied her craving to create and control her own projects.

When Khasu came back from L.A., where everyone was cowed by the controversial sparks of "Hunting in America," he teamed up with Simmons and the cameras began rolling. Khasu directed and Simmons produced.

"The evolution of me directing comes after going to L.A.," Khasu explains. "I think that my writing probably demands that I direct it myself because my vision is so specific."

"The subject matter for ‘Hunting in America’ is so political and so hot," says Simmons. "The way that Kona wrote [the plot] and the characters in this film, make it even more controversial. And I think that’s why people in L.A. didn’t want to touch it."

What’s so contentious? Khasu tackles racial profiling with the courage of a Pamplona bull. His protagonist Ben Hatchett, a young, successful assistant district attorney in Boston, is picked to prosecute a cop-killer case. His dilemma is that he knows the person he’s prosecuting isn’t guilty.

Nadine, Ben’s wife and a successful surgeon at Boston Medical, also knows the alleged criminal is innocent, and as Khasu says, she provides the moral parameters for Ben’s actions, making sure he does the right thing.

"But there’s an inner story," Khasu says mischievously. "There’s a film within this film. I think you have to see it to get it. It’s not a nail-biter, but it slaps you in the face."

"It’s about the choices you make as far as career and family," Simmons offers.

"The split-second decisions you make that you can’t unravel," Khasu adds. "And the choices you get forced into when things spiral out of control."

"And then how you resolve it all. How you get out of it," finishes Simmons.

Sound interesting? Add the thick stickiness of the plot to the fact that Khasu and Simmons chopped its twists into a 28-minute short, shot in eight days, on a tooth fairy sized budget of $33,000.

Khasu originally wrote "Hunting in America" as a feature, but since they couldn’t afford to shoot it in full, they created the short to submit to festivals, hoping to ignite industry buzz and further funding.

The idea for the story struck Khasu with the subtlety of a flying mallet.

"Ever since I started driving, I’ve had several run-ins with officers. Not just me, but my brothers and most of my friends have too. And we’re not talking folks off the street here, they are educated, professional people," he explains.

Khasu was arrested and threatened by a cop who growled he would "bust his f-ing head in."

Simmons has a friend who was strip-searched, harassed and thrown into jail with just his underwear.

And Bryonn Bain, who plays Ben, is the same brilliant spoken-word poet/ Harvard-educated lawyer who wrote the ever-famous article "Walking While Black" for The Village Voice which chronicled his personal experience of being racially profiled and wrongfully arrested in New York City.

The relationship that exists between cops, society and black men is something that was infinitely compelling and glaringly in Khasu’s face. But he felt that to tell an unblinking, dramatic story, he couldn’t make it strictly political. Instead he created characters with moral dilemmas that grip your conscience and shake your security.

"It’s about the decisions that we make as human beings, the stereotypes that we play with, the words we ascribe to, the beliefs that we don’t even know that we hold to be true and the tragedy of all that," Khasu says.