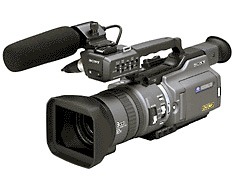 Share
Thinking about taking the leap to owning your own digital video camera? Here’s a close look at three of the indie industry leaders -- Canon XL-1S, Sony VX-2000 and Sony PD-150.

When you buy a car, you hunt around to find a ride that fits you. The seat has to be comfortable, the controls need to be at easy reach, and you’d like to get through your drive without losing parts along the Mass. Pike. So it is with the purchase of a digital video camera. For as many opinions and consumer reports as there are, most people agree on a few cameras that will get you to your destination. But you’re the only person who can decide which of them suits you best. This means The Best Camera may not be as important as The Best Camera For You.

The consensus is that the most affordable and most popular digital video cameras for low-budget indie filmmakers are Canon’s XL-1S and Sony’s VX-2000 and PD-150. Rather than give a lengthy features listing of each one (which you can get at Canon’s http://www.canondv.com/xl1s or Sony’s http://www.sel.sony.com sites) let’s jump right into the boons and banes that will help you with the decision-making.

All of these MiniDV cameras will result in decent picture quality provided you know how to manipulate the multitude of controls for gain, shutter speed, aperture and so on. (If you don’t know, study the forums and articles at sites such as http://www.digitaljournalist.org and http://www.dv.com for a while).

According to Richard Wurman at Boston Camera Rental (http://www.bostoncamera.com), deciding on a DVcam is "a scale of compromises." It boils down to what you can live without. Filmmaker Lynn Weissman agrees, "I bike with my camera and I put cases and gear in a trailer and I wanted something I could trust that’s pretty rough and ready," she explains. "The Canons are more delicate from what I understand. They say the picture is better but either way you have to make the tradeoff and decide what it is you’re willing to give up and what you want."

Though Canon images are often referred to as "warmer," Sony’s cooler image is still just as sharp. Now filming her MiniDV documentary on the Anti-SUV movement, Weissman admits prior experience with the camera created only a slight bias. "I went to the Visionaries Institute, and [the Sony PD-150 was] the camera they were using and I was really comfortable with it. I did more research but everything kept pointing to the PD-150," she says. "I haven’t been in the biz as long as some other people, but I go on shoots with people using Betacam and they tell me the PD-150 is the best bang for your buck."

"Sony PD-150s are very popular for the lower budget," Wurman confirms, emphasizing the increasing options for artists trying to give their DV a filmier look and feel. "Many filmmakers already bought the PD-150s and [come to us for] all the accessories that go with that camera… you can be more crafty with all the DV accessories. It’s not about walking out with just a camera anymore." This means filters, lenses, and other items that may enrich the quality of your video, but may suddenly increase your "low-budget" camera cost to something you could have gotten another-notch-higher camera for in the first place. Be sure when pricing cameras that you are truly taking the accessory costs and quirks into consideration.

For instance, the PD-150 is slightly heavier than the VX2000 but some feel a shoulder mount is a necessary addition due to the weight of the lens, stating Sonys are lighter than Canons overall but more difficult to keep steady for long periods of time. But others argue the design of the XL-1S is not as hand-held friendly as the PD-150. The 150 also has settable time code, switchable MiniDV or DVcam recording, 4:3 or 16:9 aspect ratio, and switchable 12 bit or 16 bit audio recording.

The notorious "hissing" from Sony’s prosumer cameras in manual mode continues its tradition with both VX2000 and PD-150, more so with the latter. But Weissman feels that people tend to expect these cameras will have lackluster audio, and would therefore seek external audio recording sources anyway. Additional audio sources will also help keep your sound mixer from going postal in post. Sony provides an audio upgrade for this hiss (at your expense, of course). But if you buy used, or you rent a Sony ‘sumer — ask whether the audio upgrade has been installed before you put your money down so you don’t get hissed off.

The newer version of the Sony VX1000, the Sony VX2000 shows improvements in sound, speed, and the retention of popular features such as Custom Presets for audio and video level controls, time lapse recording, color bars accessibility, and shutter speeds. Its auto control features for exposure, focus and white balance appear quite reliable in most shooting conditions as well.

The VX2000, priced around $2,700, is praised for its low-light shooting capabilities, which might very well be a deciding factor in your shopping. Known for its extremely low noise in moderately low light, it is clearly distanced from the pack in this respect. It means the difference between having lights in people’s faces, or being able to blend in a bit better and still get a remarkable picture quality.

Still popular is Canon’s XL-1S, the sequel to the XL-1. If you like custom presets, you will not be disappointed with the versatility and intuitiveness the XL-1S offers. There are controls galore, and settings that can be changed on the fly during filming. Canon lenses remain a solid choice for professional and prosumer videographers.

If you’re filming computer monitors at that upcoming conference, the Frame Mode progressive scan is a full 30fps and allows for a very clean image of that normally pesky screen. However, if you know you are partial to having a flip-out LCD screen, then steer clear of the XL-1S. It doesn’t have one. Canon users love the viewfinder and don’t seem bothered by the lack of a flip-out LCD, but again it’s about What You Need.

One area where the XL-1S is thinking ahead (to editing, as you should also be when considering a camera package) is in its uber-control of the external FireWire device. You can record to tape while simultaneously recording to a FireStore (a field-portable box that holds external FireWire drives). "You can plug this thing into… the FireWire output, and record to the drives at the same time as you record to the tape," explains John Rule of Rule Broadcast Systems (www.rule.com). You mark the shots you like as you go, get the FireWire drive to your edit suite, and have all the shots you marked already digitized and ready for action! Just another wouldn’t-that-be-nice item to figure into your costs. With the XL-1S and the PD-150 costing about the same at $3,600, this may be another deciding factor.

Wurman adds that you might do a little more begging for budget if you hope to blow your DV up to film. "If you’re only paying $3,500 for a camera you can add all these other things that will bring the price up," he says. "But if you want it to eventually go to film, I’d try to find a bit more money to go to High Definition." The picture quality is substantially better when blown up to film, which is why Wurman feels documentary-makers and broadcast videographers fare well with the cameras mentioned here; excellent quality for a lower price, for the small screen.

Too many choices? Then consider renting before you buy (the cameras featured here rent for $150-250 a day). This allows you to test drive the features before you’re committed to — and possibly regretting — a purchase. Rule brings up another area of concern where rental houses like his can help. "Technology is moving incredibly fast. If you lock yourself in to a camera you own, your natural tendency will be to make artistic choices that fall within the capabilities of that camera rather than what’s best for the project."

Most basic camera packages come with the exact same features from store to store, so you can choose to go local at www.crimsontech.com or perhaps the NY-based pros at www.bhphotovideo.com. There is always online shopping if you research the site thoroughly; you may get good overall deals at www.powerdv.com, www.videosmith.com, or www.bestphotovideo.com.

Compare pricing, view other’s opinions, and check out the ratings cameras have received on word-of-mouth sites such as: www.epinions.com, www.nextag.com, www.bizrate.com, and www.pricegrabber.com.  DV cameras are available everywhere you turn, and though most industry folks feel DV isn’t quite a threat to replacing film yet, they agree it is very often the way to go for the high of passion and the low of budget.

Same as you would do when buying a car: research the model, listen to other people’s experiences, and be sure you are investing in something just right for you. You are sure to find a DVcam that fits your project and your budget.