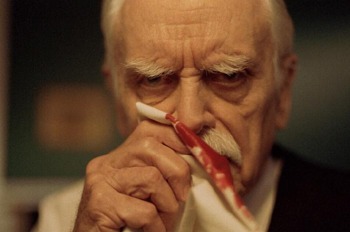 Share
It’s not only a Nick Cave song, it’s also the title for the new film by Corporate Sucker filmmakers, Kurt St. Thomas and Mike Gioscia.

Described by the duo as a "retro suspense thriller/murder mystery," the film takes place in 1978, and follows five old friends as they reunite at their 15th high school reunion — ready for the first time to face the ‘grisly’ events that took place during their last week of senior year. The film features punk rock legend John Doe (formerly of the band X, "Boogie Nights," "Roswell"), Edmund Lyndeck ("Big Daddy," "Road Trip"), James Murtaugh ("Vanilla Sky," "The Last Days of Disco," "The Howling"), and Boston’s own John Kuntz, recently named Best Actor In Boston by The Boston Phoenix. The film was shot over 27 days and a good portion of it was filmed in the old Metropolitan State Hospital in Waltham, partially using sets left over from "Celtic Pride."

The two filmmakers co-direct and co-produce their films. Mike, who wears an additional hat as writer, explains he got the basic idea near the time of his own 10th year high school reunion… about friends getting together, not having seen each other in a while. "Then it’s just a matter of making it evil," he explains. He describes the basic theme to be about things that happen in your past and don’t necessarily go away no matter how much you try to forget them. The title is borrowed from a "creepy" Nick Cave song. "Till this day I don’t know what the song is about… I just liked the title," explains Mike.

Mike and Kurt first appeared on the Boston independent film scene with their black and white ultra low budget feature "Captive Audience," a film that focused on the strange bond between an overnight DJ at a rural radio station, and a gun-totting intruder. The film won seven international film festival awards including three at the 1999 Planet Indie Film Festival in Toronto, and continues to be shown occasionally on WGBH/WGBX. The two, both former employees of WFNX, have also directed several music videos for Boston favorites like Orbit and Rustic Overtones.

So, naturally there were major differences between making the first and second films. In addition to being in color, the crew size grew from about four to 30. Now Mike and Kurt had to worry about things like SAG rules and catering, rather than "Kurt making broccoli for everyone in his kitchen." And the two admit being occasionally intimidated by the prospect of directing well-known actors like John Doe and James Murtaugh.

With "Captive Audience," which took around three years to complete, the two would film for a weekend, then wait a few months until they came up with some more money. However, Mike points out this method may have been for the best. "It was good that it took us that long… I don’t think we were ready to shoot for a month straight." After all, the pair readily admits entering the process without a much of a clue about filmmaking, and credit DP Scott Crawford and editor David Fisher for teaching them most stuff as they went along. "We didn’t know you had to clean the gate," points out Mike. Adds Kurt, "We didn’t know what the gate was."

Yet in "The Red Right Hand," there were scenes with car mounts, and fire, with the fire department there to put it out. There was a month of set preparation, and a week of acting rehearsal. "I would have had the porta-johns emptied a lot more than we did," muses Kurt, thinking back on what he learned dealing with such a large production.

However, no matter what the budget, every indie film has its production nightmares. For example Kurt explains, in homage to movies like "Psycho," and the "Great Texas Chainsaw Massacre," the pair decided to decorate their sets with a number of animal heads. But on the very first day of shooting a very large elk head (purchased on eBay) fell on a crew member, its antlers putting a big incision in the gaffer’s forehead.

In another incident, the production got kicked out of an inn in Rockport where they were filming, never having clearly explained just how long the shoot would take. "In the 15th hour when our gaffer is setting up a light in the dining room with his pants down a little low around his waist…and there was a woman trying to eat her lobster bisque…they were like…you better go home now," explains Mike. "We did go back and pick up a few shots of it later," adds Kurt. "They didn’t even know we were there."