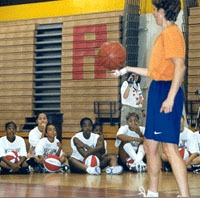 First-Hand Adventures of a First-Time Filmmaker, Part 3: Must Be Your First Film

If you check the Archives to read the previous articles in this series, you will know I am following professional basketball entertainer and cosmic enthusiast Sandy "Spin" Slade to her workshops and performances for my one-hour documentary, "Spinning A Basketball, Shaping A Dream." Here are the latest challenges to add focus to this first-time filmmaker’s endeavor.

A large part of Slade’s life is traveling; I want some footage to illustrate that. Therefore, I plan on taping one or two of Slade’s airport arrivals. Since it will be just me and my camera, I don’t plan on going through the hassle of contacting airports for permission. I fear it would be more trouble than it’s worth. I am hoping it will look like I’m just a geeky family member videotaping someone getting off the plane, and therefore arouse no real suspicion. I don’t plan on shooting anything to identify the airport either. Any thoughts on this?

From flying in to flying out: After experiencing audio-technica’s ATR35s lav wire crumble, I am ditching it and purchasing a wireless lav for the upcoming shoot in November. What is a decent, reasonably priced wireless lav that connects directly to the Sony TRV-900? Can I avoid the cumbersome and costly adapters?

An amusing note regarding Site Releases: Folks have been more than happy to let me film at their locations, knowing their organization will receive an end credit. But everyone seems to think it’s going to be an hour-long piece on their business. "Can you be sure to mention our conventions, web site, ten-year anniversary, and company spirit program?" I guess everybody wants his or her 15 minutes, but it is hilarious to me that every place I go asks me to "make us look good."

Speaking of hilarious, have you caught your breath from co-NEF writer Peter Bohush’s digital video articles (also in the Archives)? While his humor has me in stitches, his experience with crashed editing systems has me in tears. He is not the first to advise me to go Macintosh, since they have filmmaker packages with built-in editing software. Or at least that’s what I hear. Where are these elusive filmmaker-friendly computers anyway? And is that a wise long-term investment; i.e. will I be able to output to whatever format I need to distribute to film festivals, dub houses, etc.? Post your expertise/experience/tirade/response in the Forum.

That brings up other issues. Do I want to invest in the editing system myself, or do I want to hire an editor with the equipment and edit over his/her shoulder? Sifting through NEF’s production resources directory is quite a challenge. It is simply a link, so you have to visit every one because the list doesn’t reveal what kind of experience the company has. (David Smith Productions, listed in the directory, has a friendly, informative, and practical guide for a novice producing a video. It’s applicable to any video situation, even though the company is corporate video-oriented.) What should one look for in a documentary editor? When I go to these techno-shmooze-fests like the recent MMA fifth anniversary party, I will change my name tag from "Lorre Fritchy" to "Hey, I need an editor for my documentary!" and see what happens.

Speaking of editing, on to time code glitches. I don’t know how it is with other cameras, but with the Sony TRV-900, if you let the tape play even a second beyond the last recorded frame, the tape counter resets itself. Let’s just say, hypothetically, you don’t trust the camera to not erase over your last shot, so you rewind a few seconds to check it, set it up, and THEN pick up recording. You have probably gone an extra second past your last shot and therefore zeroed your time codes. Even if you used part of the tape, switched tapes, then later put your first tape back in and cued it up to the last frame, same problem. Translation: when you go to edit/make time code dubs, you might have three or four identical time codes on one tape. You are now a fallen angel in Editing Hell. So for you fledgling filmmakers–RTFM thoroughly, take some classes, and heed the advice of NewEnglandFilm.com’s articles.