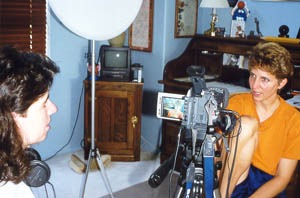 First Hand Adventures of a First-Time Filmmaker, Part 2: On the Set

Share
NewEnglandFilm.com writer Lorre Fritchy heads onto the set for her first series of interviews and footage.
As you recall, in August I had a video shoot in Southern California, following professional basketball entertainer Sandy "Spin" Slade to camps and school performances for my one-hour documentary, "Spinning A Basketball, Shaping A Dream." Plenty of things in have changed since last month’s installment, most notably the camera. Thank you for your suggestions. It seems I made the right decision in settling on the $2,500 Sony TRV-900–yes, the 3-chip. (If it’s good enough for "National Geographic" documentaries, it’s good enough for me.)

I brought 25 one-hour tapes and filled 16 of those hours in ten actual shooting days. This was a whirlwind shoot, and as you know, it’s not just the shoot time; it’s the set-up and clean-up time you need to account for. I was able to get a few sit-down interviews with Slade, as well as basketball paraphernalia, newspaper articles, old photos, etc. But oftentimes, as is the nature of the beast, the shoot occurred in less-than-ideal lighting and audio situations: in the gyms, en route, or on the fly.

I would have been much less confident had it not been for some crash-course lessons and equipment loans from A.J. Dimaculangan at Double Diamond Productions in Brookline, MA. A seasoned pro and a class act, Dimaculangan offered some recommendations and warnings that were critical to the success of this shoot. My favorite was the cheating magic of the silver/white reflector I invested in, since I did not have funding for professional lighting equipment. The nature of Slade’s work requires her to move quickly–around an entire gym, anyway–so there was no one spot in which to set up. I realize this means the end result may actually LOOK like–gasp–a documentary done by a first-time filmmaker!

The toughest part was getting the Appearance Release Forms signed so I would have permission from people appearing enough to be recognized. Although the legalities of some documentary filmmaking appear much more lenient than feature filmmaking, it is still a CYA issue. One helpful suggestion from a LA entertainment attorney was to put a sign up outside the gym that stated something like, "This session is being videotaped, and by staying, you are giving us permission to get you on film," and then videotape the sign hanging at the entrance. Another similar suggestion from Barry Hampe’s book "Making Documentary Films and Reality Videos" was to get the filmmaker on video addressing the crowd and basically stating the same thing as the sign. Since people wandered in at various times, I went with the posted sign as well as appearance release forms whenever possible.

The other issue was the Site Release Form. Most schools and locations were cooperative, but Sandy Slade’s normal fitness center was hesitant to permit us to videotape her working out in their club. The reason–no exaggeration–was they "don’t want her clothes to be airbrushed out and have a naked woman working out in our fitness center in a video distributed on the Internet." Apparently they’ve had some shady characters (whom I doubt asked for permission first. And not for anything, but if people believed athletes buffed in the buff here, wouldn’t that INCREASE membership?) Slade often practices her basketball spinning (fully clothed) on the racquetball court, so I wanted to get some footage of that, and also of folks peering curiously through the window. How does one massage the legalese of a major fitness center chain? May have to try again on the next shoot, which will be needed.

Slade gave me some contacts for possible funding contributions, as well as athletes who may be interested in narrating this video. Question: Do I ask the person NOW if they’d be interested in doing the voice-over, even if it might be several months before we’re at the recording stage?

"If I had more money," sure there were things I might have done differently. Invested in a boom mic, for one thing. Using an ATR35s lav from audio-technica was fine for functionality, but a real pain in practicality. The cheap wire was also a horrible mess of knots no matter how many times we unraveled it. You get what you pay for. Basically, I thought I could have gotten more spontaneity if I had a boom mic at the ready instead of having to wire the subject before getting the shot, soundbite, etc. I would also have taken some basic photography courses to have a better eye for lighting.

I originally intended to do this shoot myself, but after seeing the many on-set responsibilities that quickly add themselves to the to-do list, I would not recommend going solo. Thankfully, I had the lifesaving assistance of my partner in crime, Gayle Green, who freed me up from sweating the small stuff so I could stay focused on the story–always the story. All in all, we had no real horror stories during this shoot. If any exist, we won’t find out until the editing stage! That’s the next step, researching digital editing possibilities. Do I want to hire someone or rent the goods and do it myself?

I haven’t mentioned this yet, but in addition to shooting, I attended a "Selling to Hollywood" screenwriters’ conference. (Yes, I was rather busy and still managed to ride It’s A Small World.) This is an intense three-day scriptfest with the opportunity to network with other writers, agents, and producers whose credits you’ve actually heard of. In addition to pitching my screenplays (another adventure altogether), I must have pitched this Spinumentary 100 times, and there was a raised eyebrow and sincere interest on every occasion. That means the topic is at least intriguing enough. Now it’s about finding the voice hidden between the lines of digital video.