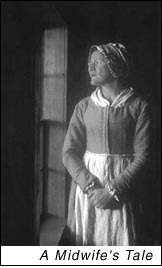 Review of ‘A Midwife’s Tale’

Share
A review of the local film.
When historian Laurel Ulrich began her research into the lives of American Revolution-era women, she was hardly encouraged by her initial efforts. "You won’t find much," everyone seemed to say. And when she began making her way through the diary of midwife Martha Ballard, she was delving into a book that others had found next-to-useless–too full of trivial detail, or so they said. But the details were what she found interesting; and faced with so few sources, Ulrich realized her only option was to dig deeply into the ones she had, to discover the unspoken realities of women’s lives written between the lines of Ballard’s diary.

The result of Ulrich’s efforts was the Pulitzer Prize-winning book "A Midwife’s Tale," now a movie of the same name, made in collaboration with Ulrich by producer/writer Laurie Kahn-Leavitt and director Richard Rogers. The film recounts the day-to-day events described in Ballard’s diary and expanded upon by Ulrich, based on some careful deduction, a little guesswork, and the occasional flash of realization.

The film juxtaposes enactments of the events in Ballard’s life, enhanced by voice-over read directly from the diary and interviews of Ulrich describing her exploration of the text. Ballard’s account is stark, dry, stripped of passion like the stripped-down prose of a minimalist novel. But passion lurks beneath the unfeeling exterior, waiting to be unearthed by a careful reader.

Ulrich peers into the gaps of Ballard’s narrative to find substance behind the trivia, exploring the ramifications of seemingly out-of-place comments and deducing meaning by thoroughly mapping out the events and people involved.

Ballard, adeptly portrayed in the film by Kaiulani Lee, was a midwife–the most lucrative job a woman could expect to have at the time. In a thousand deliveries, she never lost a mother’s life. In addition to the delivery of babies, her duties also included medical care. She spent many nights away from her husband and children, caring for the sick and women in labor. She had a few buried secrets, however, and some worries that would not be noticed in a casual reading of the diary. The filmmakers recreate her life and world in an engaging and thought-provoking manner, expanding on both her personal concerns and the customs and beliefs of the society at large.

Though the film succeeds in drawing us into Ballard’s inner life, it is less successful in evoking Ulrich’s quest. She is onscreen enough to warrant exploration of her character, but we get little. How do the discoveries Ulrich finds in Ballard’s diary relate to her own life in modern-day society? Any answers to this question are as unstated in the film as are the passions in Ballard’s diary. On the whole, however, "A Midwife’s Tale" is a well-made, informative film–certainly of interest not only to history buffs but to anyone curious about people’s lives in post-Revolution America or the changes in women’s roles throughout our history.