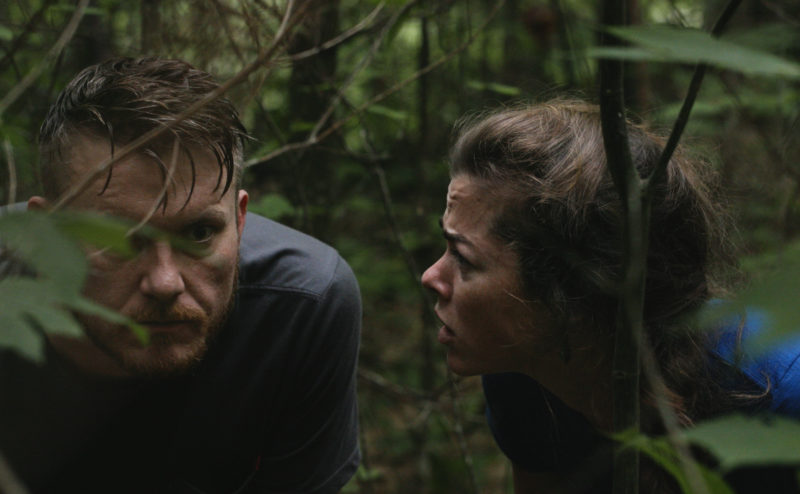 We spoke with Ben Silberfarb about his “mild horror” film, The Hike.

Eager to escape their busy lives, a couple sets off on a backpacking trip. They journey up a remote trail, set up camp and head to the top of the mountain. On the way back, they become aware of a menacing presence and discover that their camp has been overtaken by a malevolent stranger.

Shot on location in the Green Mountains of Vermont, The Hike won Best NH Short Film at the New Hampshire Film Festival and Best Screenplay at the Vermont International Film Festival. We caught up with writer and director Ben Silberfarb about his allegorical horror film.

NewEnglandFilm.com: When did you know you wanted to make films, and how did you learn?

Ben Silberfarb: I knew in high school, but it took me a long while to come back to it. I just started doing it!

NewEnglandFilm.com: What can you tell us about the film?

Silberfarb: The Hike is a mild horror film based on an actual event, but it should be viewed as an allegory.

The film is best summed up by the opening quote by Martin Luther King: “We are now faced with the fact that tomorrow is today. We are confronted with the fierce urgency of now.”

NewEnglandFilm.com: Where else has the film been screened? Any memorable audience reactions?

At most of these showings for the film, someone in the audience usually screams.

NewEnglandFilm.com: How did you find the cast and crew for this film?

Silberfarb: I found them through the local theater and through friends.

Silberfarb: I’m currently working on a feature about a rogue cop in the 1970’s in Vermont. The film is based on a true story.

NewEnglandFilm.com: Do you have any advice for other filmmakers?

Silberfarb: Say “yes!” to every opportunity you get to show your film!

Watch The Hike now through October 14 as part of the 2019 Online New England Film Festival.