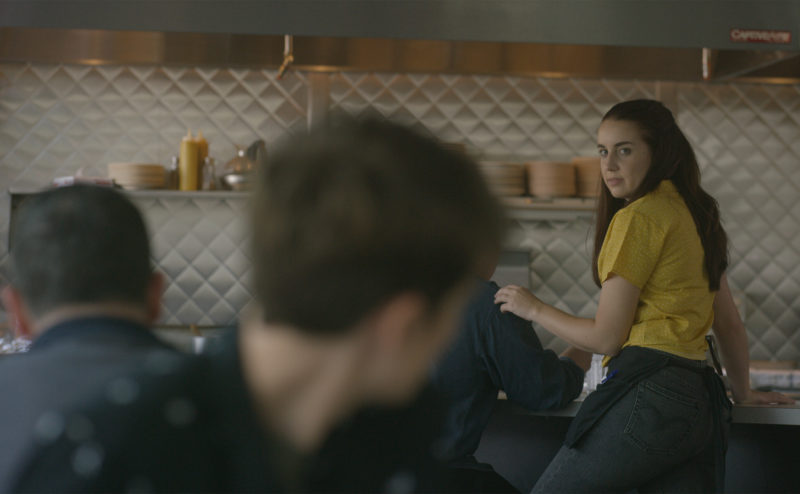 Tania walks into a rural diner and finds herself navigating an encounter with a waitress, Alex, who may or may not be flirting with her in the short film Burning My Tongue

We caught up with director and writer Murphy McCann about how she conceived her film Burning My Tongue, as well as the importance of having the right people to support you while making a film.

The possibilities of a romance are a source of both excitement and anxiety in the short film Burning My Tongue, and more so for Tania (Emily Elmore) as she discovers a friendly waitress who may or may not share the same attraction (Hannah Daly). The moments between them are full of sparks, and we root for them, even as the situation remains ambiguous. Elmore’s performance in particular stands out, elevating the already great script she has to work with.

Burning My Tongue premiered at Provincetown International Film Festival in June and is still on the festival circuit. You can currently watch it streaming through October 15 as part of the 2019 Online New England Film Festival. We caught up with director and writer Murphy McCann about how she came to conceive her film, as well as the importance of having the right people to support yourself in one’s film endeavors.

Murphy McCann: I was in college, I took a class on production and never really looked back.

Murphy McCann: A lot of times when you’re LGBTQ there’s a lot that has to be said without actually saying it and I wanted to make a film about that.

Murphy McCann: I work with a lot of great people at Animus Studios and they were all willing to help in any way they could. I also called in a few favors from my friends at WIFV/NE. Boston Casting was also very generous with their time and efforts to help me find the right actors.

Murphy McCann: Surround yourself with people you trust and let them do their thing. As far as fundraising/making things happen goes don’t be afraid to reach out and ask for help. It’s surprising how willing people are to pitch in.

Watch Burning My Tongue through October 15 as part of the 2019 Online New England Film Festival.