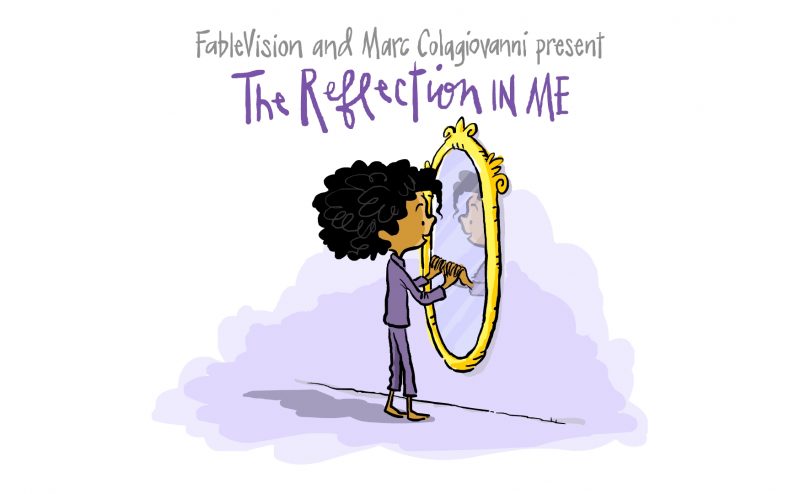 2018 Festival Interview: The Reflection in Me

If your reflection could talk, what would it say to you?

In Marc Colagiovanni’s short film The Reflection in Me, a young girl is surprised when her own reflection begins to talk. Instead of being some nefarious other-person living in a backwards dimension like in so many horror movies or slash-y thrillers, this reflection is affirming and kind; the deepest reflection of the good inside the little girl.

Originally screened at the Boston International Kids Film Festival, Providence Film Festival and many others, The Reflection in Me is now streaming through October 15 as part of the 2018 Online New England Film Festival. We caught up with Marc Colagiovanni to learn about how he got into filmmaking through writing and find out exactly how watching his daughters engage in  unselfconscious play in front of their mirror inspired him to create this loving film.

NewEnglandFilm.com: When did you know you wanted to become a filmmaker? And how did you learn – did you just start doing it, did you go to film school?

Colagiovanni: To be honest, my goal is to be a published children’s book author. After years of unsuccessfully sending manuscripts to publishers, I decided to use the medium of film as an unorthodox way of getting one of my stories in front of the masses with the hopes of attracting the attention of a publisher (a goal I am still pursuing!) The producer of the film, FableVision, is owned by NY Times Best Selling author/illustrator, Peter H. Reynolds. As fate would have it, Peter decided to personally illustrate my film which I will forever be grateful for.

Colagiovanni: The inspiration for the film came directly from my three young daughters. As I was watching them laugh, sing, and dance in front of the mirror one day, I realized how incredibly different the experience in front of a mirror is for adults. As adults, we seek out mirrors to correct our perceived imperfections. We fix our hair, check our teeth, tug at our clothes. But children? When they look in the mirror, they see perfection! As I watched my little girls that day it saddened me to realize that they one day, too, will seek out mirrors to correct their perceived imperfections. At that moment, I quietly prayed that they will forever see themselves as I always will…perfectly perfect. From that moment, the idea for my story was born.

NewEnglandFilm.com: Where has the film been shown (festivals, other screenings, etc.)? Talk about a memorable experience with an audience.

Colagiovanni: The only advice I can give is to create stories that you are passionate about. Having a captive audience, whether it is an audience of 1 or 100, is a privilege and one that comes with a great deal of responsibility. Our job as story tellers is to make a difference, inspire, and to promote change. If we create content that comes from the heart, then, together, we can change the world.

NewEnglandFilm.com: Anything else you want to share that might be of interest to our readers – about you, your work…

Ambrosino: I have been a practicing attorney for the last 17 years. While I am extremely proud to be a part of this profession, my passion is writing and creating. My advice to anyone reading this is to pursue your passions and never give up on your dreams.