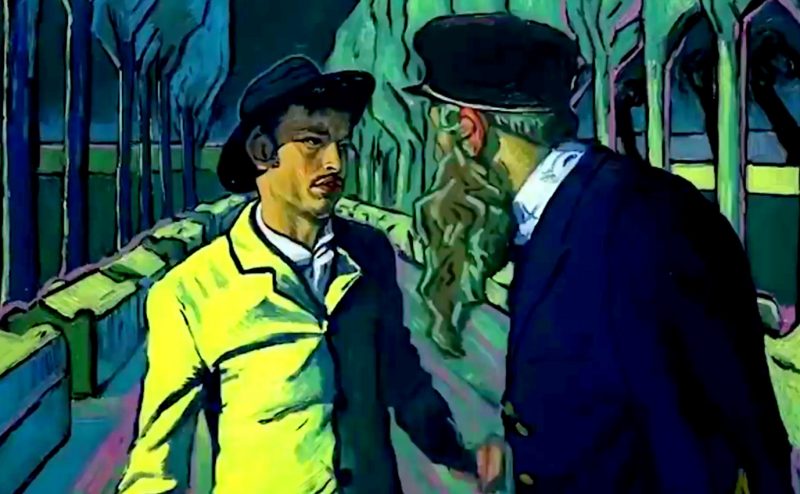 A still from the documentary Loving Vincent, which screens at the Art & Design Film Festival.

A glimpse into this year’s festival from a conversation with the woman behind it.

NewEnglandFilm.com interviews Emily Steffian, Artistic Director of Rhode Island’s Art & Design Film Festival about her inspiration for the festival, about notable films playing this year, and about her ideas for expanding it in the future.

Most people believe that they only experience art in a museum, gallery, or class, but Rhode Island’s Art & Design Film Festival exists to remind them how art influences their daily lives. The festival strives to illuminate this notion by showing the enormous impact that art, and design have on our culture and society at large.

Now entering its third year, the Art & Design Film Festival, which runs November 2-12, 2017, offers a fresh series of curated films focused on diverse disciplines within art and design. Screening in Providence, Newport, and Jamestown, RI its films celebrate artists, designers, craftspeople, collectors, curators and makers from around the world while entertaining, educating, and reflecting on the immense influence of art and design.

Recently NewEnglandFilm.com’s Evan Crean spoke with the festival’s Artistic Director Emily Steffian about what inspired her to create the festival, about some of the unique films playing this year, and about ideas she has for how the festival can continue to expand in the coming years.

Evan Crean: How did the idea for the Art & Design Film festival come to you?

Emily Steffian: I’ve been in the exhibition business with my husband Daniel at the Cable Car Cinema and I had a business before this. We program films that are in the arthouse realm and repertory cinema from the past. We also do film series and film festivals. My interest in doing this work has really focused on documentaries. I’m more taken with true stories, because they’re often more interesting than fictional ones. So, I’ve spent a lot of time watching documentaries and going to festivals.

I am an artist myself. I went to RISD and have a background in metal-smithing and mixed media work. The more I saw films that were about people who make things, the more I thought, ‘Are there festivals that do this?’ And there aren’t really. There’s one that does architecture and design very specifically in New York and they travel around the country. But no one’s really looking at the whole aspect of creativity, and I just thought, ‘Well, there’s got to be people interested in this.’ If I’m interested in it, there’s somebody else that is, so there’s an opportunity, really to engage with people.

EC: What makes the festival different from others out there?

Steffian: Often festivals will invite the filmmakers and we do that, if they can come. But I’m interested also in how other people experience a film. So we often ask people, who are in the fields that relate to the film to come and speak. That always creates a great discussion afterward, so it’s not just about the filmmaking.

It’s not really about, how did you make this film? It’s more about what’s in the film and how that’s impacting people. So, that makes us a little bit different than a lot of other festivals. We’re not doing business in our festival. We’re not selling films. Our goal is to highlight people and their work.

EC: What type of people, generally, do you meet at the festival? Are the majority of them artists, or are they film fans?

Steffian: It’s kind of all people. Daniel, my husband, said that we had a call from someone who was up in upstate New York. They’d been coming to the festival the last couple of years and they wanted to buy a whole slew of tickets. So they’re coming from kind of far away, and I think they’re just interested. I don’t know if they’re artists or not, but I think we are heavily engaged with the artist community in southeastern New England here.

There are also just a lot of people who just like documentary film. There are a lot of people who like movies. They like festivals, or they’re just fans of Eva Hesse. Somebody might just see one film that they care about, they’ll come to that, and then say, ‘I’ll go see something else that I don’t know about.’ EC: What sets this year at the festival apart from other years?

Steffian: Every year is going to be different because of what’s available and out there in the world. Last year we had a lot of photography, but this year, we don’t have so much focus on one subject matter. We thought we’d encourage people to come see things that they may not consider to be in their wheelhouse.

There’s a documentary about a ballet company called, Rebels on Pointe, which is an all-male gay ballet. Trockadero, is the name of the company. It’s an interesting story about how they were never allowed within the traditional ballet world and they created their own company that’s world-renowned. And a lot of what they do is on-point, and very specific to the ballet rules, but also with some great tongue-and-cheek comedy.

There’s another film about an actress from the ’40s, Hedy Lamarr, who was known as the great beauty of her time, and great actress of her time. But she was also secretly an inventor and designer. She is responsible for very early technologies that we know today as Bluetooth and Wi-Fi.

EC: What are some other unique films playing at the festival this year?

Steffian: We try to balance the programming with films that are about well-known people. This year we have a film about Vincent Van Gogh called, Loving Vincent, entirely painted in oil paintings and animated with oil paintings, so every frame is a different oil painting.

Steffian: It’s kind of incredible…and it’s in the style of Van Gogh. I think over 100 artists made the film, but it’s a different take. It’s his sort of life story, but in this animated way.

Then we have a smaller films, you would never see in a theater anyway, because they don’t have distribution in the larger context. There’s a wonderful film called Paa Joe & The Lion about a Ghanaian woodworker, who is quite well-known there as a pre-eminent coffin carver. He creates coffins that are the shape of fantastical things, like a giant octopus, or a lion. That’s a story you’d never see otherwise.

EC: That sounds like a fascinating documentary. That’s such a hyper-specific art.

Steffian: We’re having an industrial designer talk about that, who came from a woodworking background and he’s going to lead a discussion around the rituals we have around death and dying around different cultural context. In our culture, we don’t do that kind of thing, but in Ghana that’s very special and important aspect of the way they go through that process. Makes you think about it a little bit differently, you know.

EC: Looking ahead, what’s your vision for how you’d like the festival to grow or expand?

Steffian: I would love there to be a combination of film and workshop, where people could come and learn something with the person. We had setup a workshop this year, as kind of a trial, but the artist couldn’t make it. There was just too much traveling involved to get them here in time. But I think, that could be an interesting combination to have some workshop activity.

EC: I agree. I think that would be really cool. It’s almost like taking the interactive elements you have now, a step further.

Steffian: This is off the top of my head, so it’s not something that we’ve talked about as a team, but another idea is that if more people were interested in it, to share it. To have it in another place, not just in Providence. The idea would be to translate it to another community, or some other city. Which, I think, could be possible. I don’t really know a lot about how that would work, but that could be a way that the festival grows.

The Art & Design Film Festival runs November 2-12, 2017. To learn more about the films and screenings or to purchase tickets, visit the festival’s website.