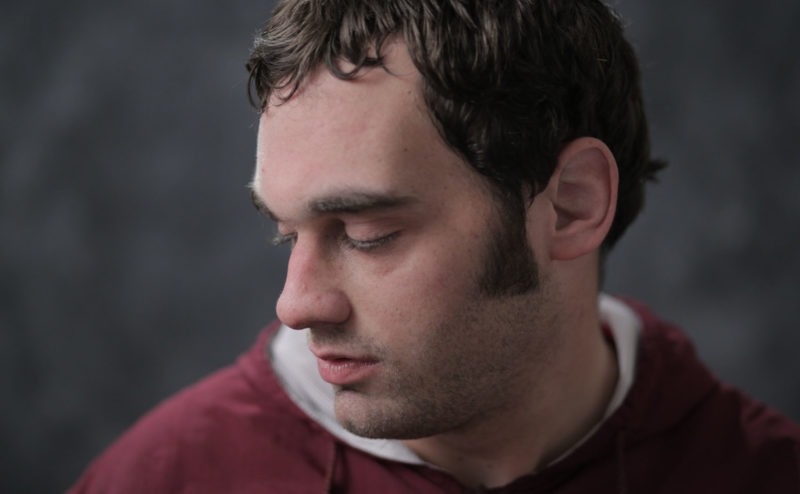 An interview with Jeff Bemiss about the short documentary featuring James Colburn and his family, and his life with Fragile X Syndrome.

Screening at festivals from the Big Sky Documentary Film Festival to the Rhode Island International Film Festival, Coaching Colburn is now screening on NewEnglandFilm.com through October 15 as part of the 2016 Online New England Film Festival. Here, Bemiss talks about the unusual trajectory of the film—from collaborative student production to award-winning festival hit—and about the impact the film has had on its subjects and audience.

If a story is made by its characters, then it’s no wonder that Jeff Bemiss’s film Coaching Colburn has found such success with festival audiences. The short documentary captures the humor and vulnerability of James Colburn and his family, in spite of or perhaps becomes of his life with Fragile X Syndrome.

Screening at festivals from the Big Sky Documentary Film Festival to the Rhode Island International Film Festival, Coaching Colburn is now screening on NewEnglandFilm.com through October 15 as part of the 2016 Online New England Film Festival. Here, Bemiss talks about the unusual trajectory of the film—from collaborative student production to award-winning festival hit—and about the impact the film has had on its subjects and audience.

NEFilm: How did you develop the story told in Coaching Colburn?

Bemiss: A few semesters ago, Trinity College in Hartford, CT offered an unusually ambitious film production class with the unassuming title “Film 309.” Not listed in the course catalog, students applied to take the class via an interview process. In the end, eleven students were chosen. These student were challenged to conceive, script, shoot and deliver a cinema-quality short film in one semester, including creating a marketing campaign.

The class started with an accelerated version of the story development process, during which the class considered more than 130 story ideas. One student pitched a profile of her 26-year old cousin, James Colburn, who suffers from a developmental disorder called Fragile X Syndrome. This idea won the day and the students tentatively titled their project The X-Factor.

Students began training on digital cameras, lighting and sound equipment. Two weeks later, they loaded the gear into cars and traveled to the seaside town of Newburyport, Massachusetts for a three day shoot with the Colburn family. The shooting days were long and intense. The students formed personal and professional bonds with each other, as well as with the star, James Colburn. For his part, James had the time of his life. In his mind, he became the “cowboy movie star” he was always meant to be.

Returning to Trinity, the first job was to transcribe the hours of footage the students had collected. A script was generated, and picture editing began in parallel on eleven Final Cut Pro workstations. The result was sound designed, mixed, and color graded into a 16 minute serio-comic memoir infused with the larger-than-life personality of James Colburn and the caring spirit of the family and friends who surround him.

NEFilm: What was the response from James and others who have been touched by Fragile X Syndrome?

Bemiss: When we shared the film with the Fragile X community and were blown away by the response. People from all over the world wrote to tell us their stories and how much they appreciate the film. We were touched by this email from a parent of a child with Fragile X who saw Coaching Colburn and thanked us, saying how she now thinks of James and knows everything is going to be okay.

NEFilm: When did you realize you wanted to pursue filmmaking?

Bemiss: I grew up next to a farm in the northwest corner of Indiana. I saw Star Wars when I was eight at a drive-in theater carved out of a cornfield (think Field of Dreams with a movie screen). Star Wars set my imagination on fire. My parents held a yard sale, and I saw they were selling a camera. I asked if I could have it. It was a Bell and Howell Super 8. For the next five years I thanked my parents by asking them to pay for film and developing for this miraculous gadget.

When it came time for college, I chose USC, though I’d never traveled out of the midwest. This sounds obvious, but at USC I learned that making films is different from watching films—sometimes so different that there seems to be no connection whatsoever. I could easily have decided it wasn’t for me but I loved it. I discovered the pleasure of connecting with other people through storytelling. It must be a permanent condition because I still feel cinema is one of the best ways to witness and comment on the experience of being alive.

NEFilm: What films are you working on now?

Bemiss: I am currently in production on Missing In Brooks County a feature documentary produced by Fork Films about deceased migrant crossers buried anonymously in South Texas and a team of female forensic scientists who are exhuming and identifying them.

Watch Coaching Colburn on NewEnglandFilm.com through October 15 as part of the 2016 Online New England Film Festival.