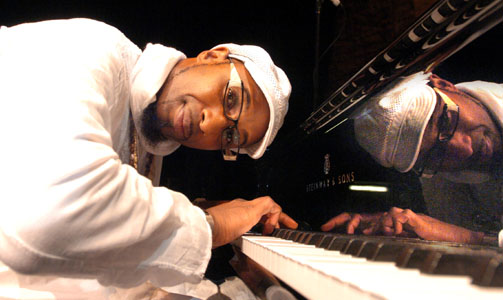 Award-winning RI-based filmmaker Soren Sorensen is seeking community support for the release of his latest documentary Omar Sosa’s 88 Well-Tuned Drums. The film chronicles the life and music of Grammy-nominated pianist and composer Omar Sosa. A campaign was launched to raise $19,000 by August 31, 2016, to complete the project. Funds received will be used for graphic design, festival submissions, legal fees, errors & omissions insurance, marketing, and publicity.

Sorensen specializes in producing nonfiction films, television, and web content with an emphasis on advocacy for nonprofit organizations. He has worked with the Vietnam Veterans Memorial Fund, Families First RI, Montessori Community School of Rhode Island, and The Picture of Children’s Health. My Father’s Vietnam, Sorensen’s first feature-length film, won the Soldiers and Sacrifice Grand Prize at the 2015 Rhode Island International Film Festival and Best Picture (Documentary) at the 2016 Flagler Film Festival in Palm Coast, Florida.

Omar Sosa’s 88 Well-Tuned Drums traces Omar Sosa’s origins from his birth in Camagüey, Cuba’s third-largest city, conservatory education in Havana, and relocation to Ecuador where he briefly wrote and arranged commercial jingles. Sosa’s story continues with a fateful mid-90s move to the U.S., a stint as a sought-after sideman in the Bay Area’s burgeoning Latin Jazz scene, and partnership with manager Scott Price that continues to this day.

Since joining forces with Price, Sosa has released almost 30 albums and been nominated for multiple Grammys and Latin Grammys. Each year Sosa performs upwards of 80 concerts on six continents. Sosa’s otherworldly talent as a musician and bandleader is what captivated Sorensen. In 2013, the filmmaker was granted unprecedented access to the composer and his bandmates for interviews, rehearsals, and performances.

Since the campaign is “all-or-nothing,” the campaign must reach the funding goal for the project to move forward. To learn more or back this project, visit the Kickstarter campaign. And check out Sorensen’s Omar Sosa Vimeo channel for the trailer and live performance footage featured in the film. Visit www.omarsosa.com to learn more about Sosa.