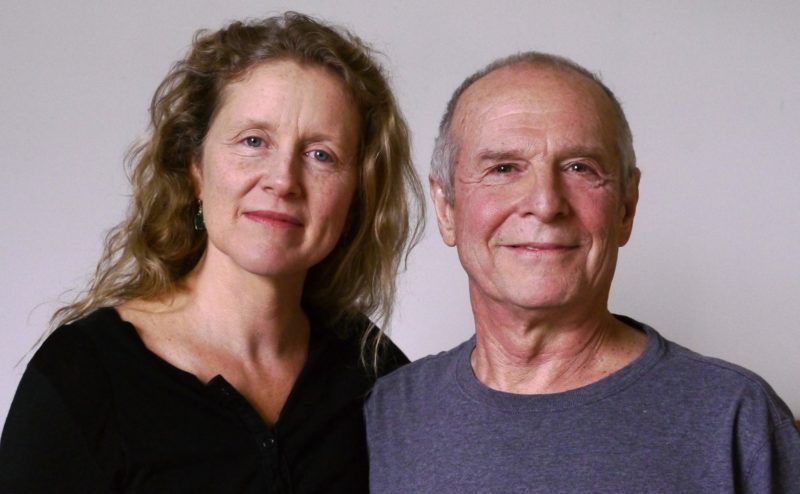 Lucia Small Talks about Her Collaborative Film with Ed Pincus

In this series, fellow female filmmakers discuss work, life, and more in this new series. For this installment, NewEnglandFilm.com writer Catherine Stewart talks to filmmaker Lucia Small as her latest work, One Cut, One Life begins its theatrical release in Boston.

It’s not often that I speak to filmmakers so swiftly after observing their work, but 20 minutes after the conclusion of my first viewing of One Cut, One Life I was speaking with its co-director, Lucia Small. In advance of the theatrical release in Boston that evening, after its celebrated release in NYC over the last few days, Small was thoughtful, generous and open.

One Cut, One Life will definitely resonate with many viewers on a profound level. Your life, likely like mine, has been touched by the terminal illness of a loved one, and the battle that ensues between the body, the mind and the medical world. But that’s not what Small and I discussed as we chatted. As much as this film is a document to the end of a life, as we’ve seen portrayed on screen before – for me, it’s the documentation of life through filmmaking that intrigues and excites.

One Cut, One Life is the work of Small and her long-time collaborator, and eminent documentarian, Ed Pincus. It follows the final years of Pincus’ life with Leukemia, where Small, Pincus and Pincus’ wife, Jane, each at varying points throughout the narrative are in charge of what we see, hear and understand about the complications of life, relationships and death. In some way, the project feels like film, or art, as catharsis. The process of filmmaking feels as equally important, if not more so, as the final product.

“Filmmaking found me,” says Small. “I never thought I’d be in film.” Small grew up on the West Coast, and the vulgarity of Hollywood was her only experience of the film world. “I wanted to stay away from what I saw as the constant pressure to be ‘on’ and ‘beautiful.'” Small found herself more drawn to discourse, growing up as an artistic child, enjoying drawing and painting.

“But I put down the paintbrush,” she admits. “And I went to study Political Theory….I wanted to do something environmental, or be a social worker.” During a rather revelatory conversation with a friend of her father’s, she discussed missing collaboration, and artistic pursuits, possible career paths emerged, but not filmmaking.

“He suggested radio,” she said. “I liked interviewing and the physical splicing of tape – it felt like my passions were merging. It made sense.” However, radio wasn’t entirely where Small landed, but classes at a local cable access channel finally opened up the world of media, and edged her towards filmmaking.

I ask Small if she felt like filmmaking wasn’t ever an option. During One Cut, One Life, Small states that she always enjoyed playing ‘the sports that the boys get to play.’ “It’s definitely been dominated by males in the past but it’s tricky. I don’t want to say that it wasn’t, or isn’t something women can consider.”

Small recalls a story that is perhaps quite relevant to filmmaking, and the debates that are occurring at Cannes currently. “The boys wouldn’t pick me at sports, and I’d be last. Then after they realized I could play they would be like ‘not bad for a girl’ and I would think, ‘Are they dumb? Why can’t they remember from Friday to Tuesday that I was good.’ It happened every time.” Small concludes that she was, and is, often surrounded by males in camera departments, or creative departments both in Boston and New York, but we leave that frustrating subject to one side as we move on to discuss her work with Pincus.

Just as gray and murky as the issue of why only 12% of the protagonists of top-grossing films over the last decade were women, and only seven percent of the top 250 movies in the past decade were directed by women, as cited in research by the Geena Davis Institute on Gender and Media, are the relationships that One Cut, One Life chronicles. Small and Pincus have worked together, on and off, for many years – most notably on The Axe in the Attic, but Small is clear in telling me that it wasn’t a mentor/mentee situation. “I was a filmmaker in my own right, and I always made sure he knew that. I didn’t want people to see me as a younger, female filmmaker with the older male filmmaker and make assumptions. It was important to establish a professional relationship. And I’m glad I fought for that.”

But Small does credit Pincus with supporting her, and believing in her, in ways that she was unable to do for herself. “I always asked, ‘Does my voice matter?’ or ‘Should I do it this way?’ and Ed told me that he trusted me. He was pivotal in terms of my career. I needed his confidence. I often said if I just had a pinky of his confidence, I would be fine.”

Small admits that turning her camera on her friend, and collaborator was not always easy but it was a project they had wanted to undertake for some time, Pincus’s illness sped up the process. “It’s really interesting, the relationship between subject and documentarian. It changes every day. It can be complicated.” Small wonders if she did everything right with her film, a film so intimate. We discuss integrity, and exploitation. One was the most intense moments of the film comes from a discussion between Pincus, his wife and Small on this very subject. And as they discuss the camera pulls in closer, revealing more. “All I can say is, I did what I did. Of course there are times I want to take myself out, but I did it.”

As I continue with my own documentary process, and a challenging relationship with my own subject this film came at a perfect time for me to watch. It asks many questions that I have asked myself as a filmmaker. Am I changing the situation by being here, with my camera? Does this deserve to be on screen? Am I exploiting someone, something or some situation? These are the struggles of documentary, the indecency we skirt, or tackle.

I beleive, in terms of One Cut, One Life – the truths shown and spoken in the film are imperative to explore. They are important to helping us understand life, and death and the relationships we make along the way. This should be documented. Sometimes filmmaking is messy, and tricky and it takes a very brave artist, or collaborators, to make that kind of work – and we as audience members, and fellow filmmakers, can be thankful that they shared a little bit of themselves with us, in order for us to understand our work, and ourselves all the more.

One Cut, One Life is currently being released theatrically. Visit www.onecutonelife.com for more information and dates. Learn more about Lucia Small (http://smallangstfilms.com/) and Ed Pincus (http://en.wikipedia.org/wiki/Ed_Pincus).