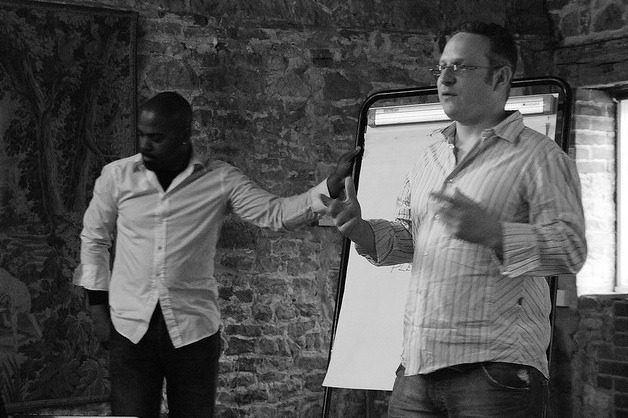 Share
Selling your script might just be an exercise in selling yourself. In a second look at pitchfests, Peter Bohush discusses tips and techniques to have your script seen, heard, and sold.

Luck, it’s been said, is what you do when life serves up an opportunity. What better opportunity for an aspiring screenwriter than to sit one-on-one with a Hollywood producer? How about meeting a dozen producers? It’s that kind of opportunity that can lead to your break.

The key to making your pitchfest opportunities successful comes down to preparation.

Pitchfests such as the Great American Pitchfest & Screenwriting Conference offer participants a handout book with contact info on each of the participating production companies, talent managers and agents. The participants note what they’re looking for, their professional credits are, and even what they’re not looking for from writers.

Great American co-founder Bob Schultz notes that, “What they’re not looking for can be just as important as what they are.” Why waste time pitching your bloody horror script to a company seeking only material for pre-school children’s shows?

Smart writers use the participants’ book to plan their pitch schedule and maximize their opportunities pitching to the most receptive companies. Armed with the company info in advance, a pitchfest writer should create a short list of “must see” companies, then use the internet to do some research on the development executives who will be at the table.

Using Google searches and industry sites such as IMDB.com, a writer can find out what the company has in development or coming out soon. This can be useful to avoid pitching the same ideas, and also to find talking points to break the ice with the execs.

Kristine Ochu, a Boston-based writer who has attended pitchfests including the Great American Pitchfest in Burbank, CA, in June 2010, offers up advice on which companies to target.

There are literally hundreds of small production companies in Hollywood. Some you may never have heard of might be the perfect fit for your script.

For example, you might not have heard of Revelations Entertainment or JC23 or Fortis Films and decide to skip them at a pitchfest. But a little research would show you that these are Morgan Freeman’s, Jim Carrey’s and Sandra Bullock’s production companies.

Likewise, visit ElectricDynamite.com and all you’ll find is a home page with a simple logo on it. But if you want Jack Black to star in your movie, chances are you’ll only get to him though Electric Dynamite, his production company, or Reveille Productions, the TV production company with which Black has an exclusive partnership.

Knowing this kind of information gives you a big head start when you’ve only got five minutes or less to meet with a development exec or intern and make an impression. You can skip right past the “Hey what kind of stuff are you people looking for?” exposition and move right in with something targeted like, “I have a script I wrote with your Mr. Superstar in mind…”

The first 30 seconds are where most execs will either engage or disengage. Every pitch you do will be different. However, you can create a formula that will guide you through the process in a repeatable manner.

For example, walk up to the table and smile first. Say hello, sit down and introduce yourself and tell the execs that you appreciate the opportunity to meet with them. This is thanking them for taking the time out of their lives to subject themselves to a deluge of sweating, desperate, and often dyspeptic writers.

Break the ice – but do it quickly. If you’ve done your homework, mention how you liked something the exec has produced. If you’re dealing with an intern, ask something about their career path with the company. Or at the very least, compliment the person on their attire or hairdo or neck tattoo or whatever. Get the person on your side a bit, but do it fast and get down to business.

Note your credibility. Something like “I wrote three of the top-grossing films of all time,” will get their attention. If you haven’t achieved that much success yet, offer up your best. “Two of my short films won festival awards,” or “I’m the top-grossing independent filmmaker in Susquehanna, Pennsylvania” or at least provide tangential credibility. “I haven’t had a screenplay produced yet, but I have had four of my plays staged professionally.”

Get Into Your Pitch and Be Precise.

Some writers make the mistake of trying to pitch seven scripts, all in different genres. That’s too much and it defeats the purpose of the pitchfest.

Remember, you goal is not to sell a script at the fest. It’s to generate enough interest from the exec or intern that he wants to read your script. Once you send it in, the exec will have someone else read it first, then if it gets positive coverage, he or she may look at it. And after that, you could get a meeting. And way down the road is the little farm stand where your script gets sold. Take it one step at a time.

If the production company produces a diverse array of genres, and you have more than one script, ask the exec what they’d like to hear from you, and give him a choice of two genres only. Example, “Gee, your company has made so many great films. I have two scripts here today, would you rather hear about my comedy or my horror script?”

Unlike baseball, you won’t get time to toss some set up pitches before bringing the heat. You get one pitch. Make it a fastball down the middle. This means you need to know your logline and story, have the presentation down pat, and bring it.

A bad pitch would start out, “Well, okay, um, let me see. Where should I start? Okay, well my script is kind of a drama but there’s also a lot of comedy in it, except for the part with the little old ladies getting ground up in wood chippers.” Next!

Instead, lay it out clearly and compellingly — the genre, the big story points, trailer moments and blockbuster potential.

“I have a buddy movie. It’s funny, but with a tear-jerker ending. There’s a thing called a bucket list, which is the list of things you really want to do before you kick the bucket. Imagine two men, one rich the other poor, who meet in a hospital when they both find out they’ve got terminal cancer. On a whim, they embark on a whirlwind adventure to do all the crazy and exciting things on their bucket lists before their time runs out. They skydive, race cars, travel the world, climb Mount Everest. It’s an amazing journey. And along the way, their friendship grows and each discovers something about himself that gives him the strength to deal with the finality of his own life. The script has two great starring roles, the kind of part that every great actor has on his own bucket list.”

If this was your pitch, you can bet the farm that the development execs across the table from you would want to see it. The pitch is concise. The story is clear. The cinematic moments can be visualized. And it’s got the power to attract big-name talent. Home run!

Screenwriter Ochu adds, “I have gotten compliments from the execs that I told my story well, and I did because I know it inside and out and love it.”

Make a One Sheet

Okay, be prepared. That’s first. Deliver a well-crafted presentation of the story of your script. Be professional. Be courteous.

Some gurus will tell you to never ask if the exec wants to read your script. Others say go ahead and ask — if the “exec” is an intern he or she may not even know to ask you for your script. Good advice may be to split the difference. Offer up your “one sheet” at the very least. And ask the exec if your pitch sounds like something he or his company may be interested in. Then let the exec guide the process.

The “One Sheet” is just that — one sheet of paper with details on you and your script. It can be colorful with images or your photo, or it can simply be text. Make it consistent with the script. If you have a wild comedy, the one sheet should make the reader laugh too.

Production exec and screenwriting coach Danny Manus of No BullScript Consulting has an informative e-book for sale on his website (www.nobullscript.net) packed with valuable tips on getting through a pitchfest successfully.

Manus offers up great insight on pitching from the executive side of the table. He touts the importance of the One Sheet. “For a first-time writer, this is the most important thing you can write,” notes Manus. “You don’t always need to bring a synopsis — and definitely not a treatment — with you to pitchfests, but you should always bring a one sheet. How else will an exec remember you or your project after hearing a hundred pitches a day?”

After meeting with the exec, leave behind your one sheet with a business card attached to it. The exec will always dictate when your meeting is over. It could be in 30 seconds! Or the exec may want to hear more from you, even after the pitchfest bell rings and the next writer in line hovers over you. If the exec is still engaged and asking questions, stay and talk. It’s your moment. But if it’s simply been a nice conversation, when the bell rings get up, say thanks, and leave.

Part of writer Kristine Ochu’s success in getting her scripts requested by six productions companies can be attributed to her extensive preparation for the pitchfest.

“I really believe and know it is up to the individual to make the most of this pitchfest,” Ochu noted. “Buy the contact book ahead of time on what companies are coming and what they are looking for. Study it the day and night before and try to target the companies that are looking for your type of script.”

Pitchfests can also serve as a starting point to build future relationships with one or two of the development execs. Meet someone, hit it off a bit, and then follow up and hopefully stay in touch as you both climb your ladders of success in the movie industry. That might be worth the price of admission.

Once you leave the room, let out that deep breath. Congratulate yourself for making it out alive. Make some quick notes about what happened, with whom you met, and any follow up required.

Then pop a breath mint. Small tip? Maybe, but your best pitch ever will go unrewarded if you gross out the execs with stale coffee breath. So pack a pocketful of Mentos and chomp one before every pitch. Even if the execs don’t like your story, when you leave they’ll think, “Well at least her breath smelled fresh and minty!”

Wash down the mint with some water. Pull out another one sheet. Take a deep breath. And get in the next line to pitch again!