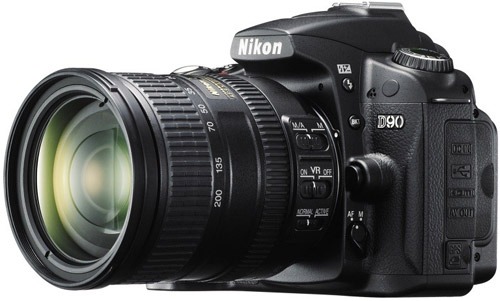 DSLR Buyer’s Guide: Which Should You Consider?

Share
So you want to buy a DSLR. Which is right for you? Peter Bohush reports for NewEnglandFilm.com.

DSLRs are the hot topic in TV and moviemaking these days. The season finale of House was shot entirely with Canon 5D Mark II cameras, as were parts of other shows such as 24.

Today’s market leader may be tomorrow’s obsolete junk, but here is a round up of some of the current popular and newly introduced DSLRs.

The current benchmark of image quality. As a still camera it delivers amazing images, especially in low light, at 21 megapixels onto an APS full-frame CMOS sensor, approximately the same size as a frame of 35mm film. It also shoots HD video at 1080p, the highest digital resolution, and at 24 frames per second, which is the same as film-based movie cameras.

The 24 fps theoretically delivers images that mimic people’s experiences with films; however there is ongoing debate about what frame rates will be in the future to exhibit optimum imagery. Expect to see this camera used for many indie features over the next year or two.

Other manufacturer lenses can be adapted to use on this and many other DSLRs.

Canon has a number of DSLRs, but for film and video recording, the two siblings to the 5D Mark II offer great imagery at decent prices.

The 7D is a metal-body camera with an 18-megapixel APS-C format CMOS sensor. The APS-C is smaller than the full-size sensor on the 5D, but still many times larger than sensors on consumer and some pro digital camcorders. It takes interchangeable lenses, both specific to the APS-C size and full-frame lenses.

HD video is recorded at 720p, and it has many of the features found in the more expensive 5D. Retail pricing is approximately $1,600 for the camera body only.

The T2i is essentially the 7D except with a plastic body. It retails for around $899 with a basic lens.

It retails approximately at $900 without lens. Look for package deals at some retailers.

Captures HD video in 720p at 60 frames per second. Has a tilting viewfinder and somewhat less light sensitivity than its competitors. Twelve megapixel still camera.

The plastic-body Lumix has its devotees, although Panasonic has been a little slow to push updated models into the market. However, Panasonic did unveil a new 3D high-definition camcorder priced at $17,000, so they may be ahead of the curve in that area.

The metal-body DMC-GH1 retails for around $1,200 with a basic lens.

Sony has a new entrant in the hybrid still/camcorder market, a head-on competitor to the Canon T2i. It’s not a DSLR (no single lens reflex to look through) but more of a compact camera that now offers interchangeable lenses and HD video.

Olympus has jumped into the fray too, with their PEN camera with interchangeable lenses. They shot their own commercial with it too.

Olympus PEN (and the Panasonic Lumix) have a Micro Four Thirds chip that is much smaller than the APS-C sensor in the Sony above and the Canon T2i. The lenses and mounts will be lightweight plastic. Very adequate for webisodes, shorts, and other small-screen projects; probably not suitable for big-screen features or HD/Blu Ray. But it’s only $599 with basic lens!

The very fact that so many manufacturers are jumping onto the bandwagon is indicative of how seriously the industry is considering such cameras. If you’re considering any type of camera purchase in the next year, then be sure to give DSLRs some lengthy consideration.