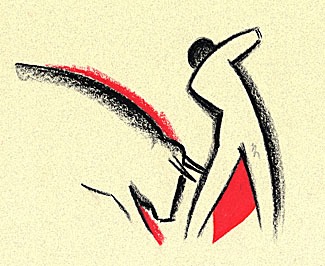 Is May New England’s unofficial Animation Month? Six Berkshire filmmakers make the cut for their hometown fest, plans to help you turn ‘soft money into gold’ are in the works, IFFBoston attracts record audience, and more… the May 2009 report of industry news, festivals, and happenings.

Dan Habib, filmmaker-in-residence at the University of New Hampshire, will be traveling to Washington DC this month with his documentary Including Samuel for a national summit on inclusive education and civil rights for young people with disabilities. This film is a personal look at how Habib’s family learns to include his son Samuel, who has cerebral palsy, into their everyday lives. Including Samuel will be broadcast nationally on PBS this fall.

Fifteen local filmmakers will present what the ICA Boston calls “a range of visually stunning experimental animated films,” including the world premiere of Karen Acqua’s Twist of Fate on May 3rd and May 7th. Filmmakers present for Q&A. Learn more at www.icaboston.org.

The 2009 Coolidge Award will be awarded to the animation duo, the Quay brothers, on May 6th. Retrospective screenings and related events are planned along with the annual ceremony that recognizes artists’ unique contributions to film. This year an exhibit of the handmade and highly detailed sets by the Quays will be on display through May 21 at The Fourth Wall Project (132 Brookline Ave., Boston). Check back with NewEnglandFilm.com next month for a full report!

Acquaint yourself with the animation department at MassArt by reading our story this month and/or going to Peggin’ Out on May 6th at the Tower Auditorium, 621 Huntington Ave; Squealing Pegs screens the following evening, May 8th, at the same location.

The 25th Annual LGBT Film Festival (May 6-17) has a new name and has added two venues to its home at the MFA: the Brattle Theatre and Fenway Health Center. Read what program personnel Aliza Shapiro and James Nadeau have to say about all this change here.

In case you were wondering, there are skaters in NH. The “first-ever” locally-produced skateboarding film Slackers screens at The Music Hall in Portsmouth, NH on May 9th. The event includes live mixed music and projected vintage skateboarding footage.

BIFF founder and director Kelley R. Vickery reported that more than 500 films were submitted to the festival for its fourth season. About 70 made the final cut; thirteen countries are represented in the lineup. In addition, BIFF will present the first annual BIFF Kids! free film screenings as well as a winners’ showcase from the Third Annual Berkshire Student Film Festival.

The makers of Still Green, a featured developed in Worcester, MA and produced by locals Doug Lloyd, Georgia Menides, and Andrea Ajemian, say it’s often described as The Big Chill for teenagers. It premieres on May 15th at Showcase Cinema North in Worcester, where it will run from through May 21st. Still Green will also screen at the Coolidge Corner on May 27-28. Check out www.StillGreenMovie.com.

The Fifth Boston Film Night takes place on May 16th at the Somerville Theatre. This month David Pierotti talks to one of the featured filmmakers, Tim Cawley about his second short, Big Day of Fishing.

The 22nd annual Connecticut Gay and Lesbian Film Festival, presented by the nonprofit organization Out Film CT, takes place at Cinestudio on the campus of Trinity College in Hartford, May 22-30.

Boston filmmaker Jared M. Gordon picked up an award for Best Producer from the 2009 Bare Bones Film Festival held last month in Muskogee, OK. Read about his take on screening his short November 31st there in this month’s issue.

Some of NewEnglandFilm.com’s own will be teaching filmmaking courses at MassArt this summer. Founder and publisher Michele Meek and past contributor David Tames are among the faculty. This month Laura Gallagher describes this and an array of other summer film opps for documentary filmmakers in New England.

Want to “turn soft money into gold?” One way is to attend a free workshop hosted by Media Services & Tax Credits LLC on June 4th. Location TBA but it will probably be in Boston since it’s co-presented by Women in Film & Video/New England. It’s a soup-to-nuts workshop on taking full advantage of payroll credits. Best read details here.

Robert Greenwald, the brains behind Wal-Mart: The High Cost of Low Price and other social-change documentaries, will headline the 2009 Making Media Now Conference. Filmmakers Collaborative hosts the annual event slated to take place on June 5th at Bentley College in Waltham, MA.

The postmark deadline for entry to the Annual New England Student Film Festival is June 15th.

Submissions are open for the Newburyport Documentary Film Festival (September 25-27, 2009) until June. If you are interested in submitting a film, use the With-A-Box link on the festival website.

Teens entering grades 9-11 can learn how stories are told through film editing at the Coolidge Corner Theatre’s Jump Cuts Camp. Three sessions are planned from end of July through the beginning of August. To register, contact Amber at Amber@coolidge.org or (617) 734-2501 x113.

Elika Portnoy, the producer and star of Tricks of a Woman, picked up an Indie Spirit Special Recognition Award at last month’s Boston International Film Festival, where the film also premiered.

The 2009 Independent Film Festival of Boston (IFFBoston) reported a record attendance of over 25,000 people at last month’s fest. (I know the screenings I attended were packed.) Local films picked up a few major prizes, including a Grand Jury Prize (narrative feature) for Children of Invention by Tze Chun; an Audience Award (documentary feature) for Shooting Beauty by Courtney Bent and George Kachadorian, (Kachadorian also picked up a marketing award); and an Honorable Mention (documentary feature) for The Way We Get By by Gita Pullapilly and Aron Gaudet.

PS: Just wanted to let you all know that NewEnglandFilm.com’s free online calendar of events is a self-posting affair, not something we post in-house, though I do consult it for story ideas. So go to it and tell the world what you have planned!