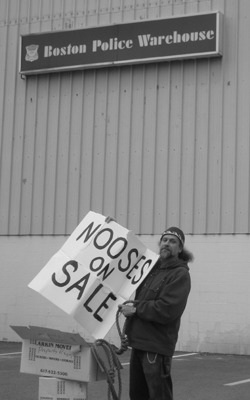 BUFF 2009: Underground and Above Board

Share
Jared M. Gordon reports from the 2009 Boston Underground Film Festival and a post-film Q & A with Tim Jackson about his documentary, Radical Jesters.

In its 11th year, the Boston Underground Film Festival pushed the envelope, crossed the line, and flew over the cuckoo’s nest to bring you a wickedly delicious blend of unexpected fare that’s a little more than off the beaten path.

Festival director Anna Feder explains the need for BUFF, which wrapped its 2009 Boston area screenings at the end of March: “The organizers felt as though there wasn’t any festival out there that screened these kinds of films, and it has a mission identifiably distinct from other area festivals.”

In her fourth year as director, Feder’s position requires a mix of professionalism and levity. “We define underground broadly. These are films that most people won’t be able to see except for the few that have DVD distribution. They run the range from experimental to animation to comedy… it’s really cinema that pushes the boundary in one way or another.”

Like any festival that stakes proper claim over the label “underground,” BUFF has had a chaotic history. Sometimes it’s been two days long, two weeks long, 24 hours long… Feder says it’s been at five venues, one venue, “but my role is to really build a more consistent plan. Movies can be chaotic. The festivals shouldn’t be.”

One common denominator during Feder’s tenure is a strong showing from local filmmakers, as well as guest series curated by locals. Feature films by New Englandites included Plague Town, which was directed, produced, and scored by Emerson alumni. Feder explains, “It’s a horror film, which we don’t usually select, but this film is a lot of fun and has strong local connections.”

This writer was particularly struck by BUFF’s careful programming of horror films. Feder explained, “We try to stay away from being pigeonholed as a horror festival. It’s really not who we are, although we accept some that push the boundary of the genre.”

Radical Jesters investigates the media hoaxing and culture jamming of artists such as Alan Abel, who convinced HBO that he had the smallest penis in the world; the Surveillance Camera Players, who put on full plays in front of public surveillance equipment; Boston-based art activist Milan Kohout; Improv Everywhere; artist Ron English, and comedian John Hargrave, among others.

Even the screening of Radical Jesters brought unexpected surprises. Before the film began, a “Mr. Cockburn” representing “Fox Searchlight Distribution” stood before the audience in a full suit to warn against the use of recording devices. When Mr. Cockburn finished his speech, he made his way up the side aisle and forcibly ejected a “patron” with a video camera. As the film began, there were several camera flashes from the back of the theater, adding to the crowd’s amusement.

Director/producer Jackson was on hand to answer questions after the screening, and two of the jammers profiled in his film joined him at the front of the theater.

Jackson explained his hope for the film: “I wanted to do something that would be interesting for art students so that they could see what sort of work was being done outside of galleries. I also wanted people to be amused and also a bit angry while at the same time raising questions about media credibility and public gullibility. The short profiles serve to keep people entertained, curious, and inquisitive in the hopes that they find out more on their own.”

Given the recent exhibition of artist Shepard Fairey’s work at Boston’s Institute for Contemporary Art, public interest in raising awareness via guerilla tactics is high, and it was high the day of the screening, when discussion heated up regarding when culture jamming becomes commercialized. Does the selling of hats and t-shirts change Fairey’s message? How does the culture jammer who unexpectedly finds commercial success/acceptance continue to define his or her own legitimacy as an artist against the establishment?

“A lot of it is becoming more mainstream as marketing agencies step up their own guerilla efforts,” observed Jackson. “I’m surprised by how few people in general are aware of interventionist practices, where you intervene on the streets, in the media, or in the general spectacle of things. The shorts that preceded my film dealt with graffiti and stenciling, and they’re definitely in the same vein. But those are also definitely illegal, while the practices I document are not necessarily so. They’re on the edge.”

As for future plans, Jackson has one front and center. “I’m making a documentary on the life of singer-songwriter Robin Lane. I wanted to do something about art and struggle and women. Robin and I worked together in the group Robin Lane and the Chartbusters. We were the 11th song ever aired on MTV back in 1981, and were at the top of the heap of the new wave punk scene. She’s working now with women trauma survivors doing songwriting. She’s very gifted, and that hasn’t gone away. There’s going to be a great soundtrack.”

In terms of how he will get this film made while teaching full-time Jackson said, “I’m just a do-it-yourself guy,” joking that his first career as a musician made little money and adding, “I worked as an actor for little to no money, I worked as a teacher in which you never make what you want to make, so I decided to try something in which I could actually lose money. You put them all together, that’s how you make a life.’

The Boston Underground Film Festival’s website is www.bostonunderground.org and Tim Jackson’s Radical Jesters site can be found at www.radicaljesters.com.

The Boston Underground Film Festival’s website is www.bostonunderground.org and Tim Jackson’s Radical Jesters site can be found at www.radicaljesters.com.