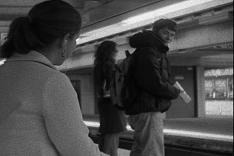 For the past eleven years, the Rhode Island International
Film Festival (RIIFF) has offered a vast cinematic buffet for film buffs to
devour.  The 12th Annual Festival, August 5 -10, is no different.  Boasting a
wide array of side contests that complement the typical festival competitions, RIIFF is known for its size, as New England’s largest film festival, as well as
its caliber, as New England’s only Academy Award qualifier for short films.  A
horror film contest, a Jewish film festival, a gay and lesbian film festival and
the New England Student Film Festival round out the international program of 289
films.
Below, NewEnglandFim.com takes a look at a few of the
selections from the Student Film Festival, a forum that showcases the work of
emerging young filmmakers, and further reveals the breadth of programming at
RIIFF.
Missed Connection
At only four minutes in running time, director Eric
Joslin’s Missed Connection is the shortest of the shorts in the New
England Student Film Festival.  In stark black and white, this film is a riff on
the missed opportunities for romance that plague urban life.  In the most
cramped of physical circumstances, like the T (Boston’s subway system), where
this film takes place, a kindred flash of eye contact between men and women can
spark interest, but these moments often slip painfully through the cracks of
life.  Hesitation, isolation, and fear are to blame.  The main character fumbles
such a connection while waiting for the train, and young
voices call out in the
background like some kind of verbal lost and found.  With its choppy cuts, the
last sequence of Missed Connection portrays the little moments in life
that, if seized, hold the potential to turn into so much more.

Lover Boy
Attention to visual detail, from the composition of gloomy
shots to avant-garde use of lighting and camera, characterizes director Zia
Anger’s Lover Boy.  Nine-year-old Myles struggles with his fear of death
through his obsession with vampires and his desire to become one himself.  From
the image of Myles building his own coffin to his attempt to coax his comatose
grandmother to bite him (and thus achieve immortality, too), the innocence and
darkness of this story are represented in every shot.
Finders Keepers
Entertainment lawyer, professor of film, and
writer/director Andrew Lund crafted the character-driven world of Finders
Keepers, to reveal how budding relationships, identities, and stories — and
the truth, or lack of truth – can make you question all aspects of life, even
film.  It’s a story of the sweet friendship between a lonely kid on vacation and
an affable guy who combs the beach with a metal detector, searching for
treasure.  Dark mysteries hover just beneath the surface of the story’s charming
facade.  With twists that will make you ponder the trustworthiness of any
storyteller, Finders Keepers pokes and prods with just enough attachment
to its realistic script.
For a complete schedule, visit
www.RIFilmfest.org.