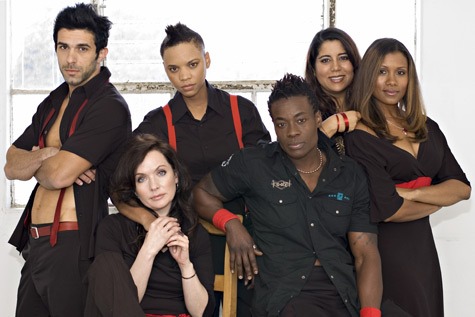 Boston’s two biggest (but until now, separate) film and
video equipment dealers will be sharing a roof in the coming months.  Further
evidence of the marriage of formats is demonstrated in the merger between
Rule Broadcast Systems and
Boston Camera Rental Company,
announced last month.  Prior to founding Rule, John Rule was general manager of
Boston Camera. He hired current manager Brian Malcolm.  “I’m glad we’re working
together again,” said Malcolm in a join statement.
Video Underground in Jamaica Plain is a great place
to rent hard-to-find-locally-made films.  After picking your favorites, every
Thursday eve in May you can also sit in the VU backyard and see films that
fit within “Alex’s Semi-Official Ode to David Bowie.”  Members only.  Sign up
here.
Locals featured in the 24th Annual Boston Gay and Lesbian
Film/Video Festival (at MFA, Boston May 7-18) include Peter Pizzi, BU
alum Shamim Sarif, and Amber Sharp.  You may recall our coverage
of Sharp
last year?  She makes good on her promise to marry Melrose, The L
Word, and 227 at this year’s fest with Don’t Go.
Haley House Bakery Café and The Color of Film Collaborative
(TCOF) present Dinner & A Movie on May 9th.  The Price of Sugar
will be followed by a discussion with the documentary’s producer and Boston
filmmaker, Eric Grunebaum.
Then, on May 10th, Haven Art Lounge and TCOF
presents Runt by Michael Phillip Edwards. “Runt is a
strikingly passionate story of a Jamaican-American man who is forced to confront
the ancestral demons of his past in order to be the man he wants to be for his
son,” says the blurb.  Tickets
here.
A New England Emmy nomination goes to… the
Rhode Island International Film Festival for its PSA campaign, No Excuses.
The 31st Boston / New England Emmy Awards will take place on May 10th
in Boston.
For those of you who yawn at making a film in 48 hours… head to Williamstown for Images
Cinema’s 24-Hour Goosechase and Free-For-All, May 10-11. There are
trophies.
Help docmakers “Connect the Docs” at a rough cut screening
of Sieh "C-ya" Sameh’s
Sweet Salone, about the young music and entertainment scene in Sierre
Leone on May 11th at the Coolidge Corner.
RSVP.

The Berkshire International
Film Festival runs May 15-18.
The Dhamma Brothers, a doc by MA-based filmmaker
Jenny
Phillips starts May 16th at the Coolidge Corner Theatre (www.coolidge.org).
Constantine’s Sword
starts May 30th with a pre-engagement screening on May 29th
with filmmakers James Carroll, Oren Jacoby and co-producer Betsy West in
attendance.

Christo Bakalov, of New Milford, CT, will be honored
with the Connecticut Film Festival Award for Excellence In
Cinematography.  Bakalov DP’d five of this year’s films, including
Americanizing Shelly.   The festival runs May 20-25 and includes other films
with CT connections, such as Two Angry Moms, a documentary that
investigates school lunches, by two mothers from Weston; Blind a short
film by New Haven’s Stephen Dest; River Lab, a short documentary from
Wilton resident Charles Clemmons; and Leave You in Me, a humorous take on
a woman’s scorn, produced by Stamford resident William Doscher.  Visit

www.ctfilmfestival.com.
Errol Morris isn’t everywhere, though that may seem
the case with the release of his latest, Standard Operating Procedure.
But one can count on his presence with the film at 7 pm on May 22 at
Harvard Film Archive.  Homi Bhabha,
director of the Humanities Center at Harvard and author of The Location of
Culture joins Morris for the post-film conversation.
If you miss it, take five with Rebecca Dorr
and Matthew Reed Baker in this month’s

Boston Magazine.
Documentaries by Alanis Obomsawin, a member of the
Abenaki Nation, screen at the MFA, Boston from
May 28-31.  She has made more than 30 films about the rights and lives of First
Nations peoples and is, perhaps, most known for 1993 film, Kanehsatake: 270
Years of Resistance, about the Mohawk protest against the expansion of a
golf course into sacred burial lands.  Obomsawin will be present at each of five
programs.
Filmmakers Collaborative hosts the 2008 Making Media Now
conference on May 30th from 9 am to 6:30 pm at Bentley College in
Waltham, MA.  Themes for panels and discussion include:  financing, pitching,
scoring a job in the growing MA film industry, and a wide range of issues
related to new media.  One of our favorite people, Doc Doctor
Fernanda Rossi, will be present.  Bonnie Waltch reports that
representatives from ITVS, POV, National Geographic, Impact Partners, Snowfall
Films, and Participant Media will also be on hand. Register at

The next New Hampshire Filmmaker Roundtable,
presented by the New Hampshire Film and Television Office, will take place June
11th from 12-3 pm at Red River Theatres in Concord.
The Center for Independent Documentary and the
Kopkind Center are sponsoring a weeklong retreat for ten filmmakers along
with mentors at Treefrog Farm in Guilford VT, from August 3-10.  To apply, write
a letter to Susi Walsh and John Scagliotti
explaining where
you are from, what media work you have done, and how you could contribute to the
seminars.  Also describe briefly the 20-minute visual media you would be
bringing to the "film slams."
Click for details.  Deadline is June 15th.  Price for the week is $300 and
includes everything.
New England college students and recent grads,
send your films
to the New England Student Film Festival by June 15th.
Both New Hampshire
Film Festival and SNOB
(Somewhat North of Boston) Film Festival have opened their calls-for-entries.
The festivals take place October and November 2008, respectively.

According to information submitted by the company to the
Maine Film Office, L.L. Bean spent $1,641,108 in Maine during 2007
photographing and producing its catalogs.  Both Maine and New Hampshire count a
large source of media production revenue from local companies’ ad budgets. The
Maine Attraction Film Incentive Program allows certified media productions to
claim rebates from the state equal to 10 percent of the money paid in wages to
out-of-state workers and 12 percent of the money paid in wages to Maine
residents.
Charlotte Young Bowens (Ann Arbor, MI), Maital
Guttman (Greensboro, NC), and Rebecca Rideout (Easthampton, MA) are
the 2008 recipients of Morrison Film Fellowships, awarded by the Maine Community
Foundation. Fellowships of approximately $1,000 were given to each honoree to
pursue film training.  Rideout will use hers to take a course on producing and
directing documentaries at the Maine Media Workshops.  Applications for next
year’s fellowships are due January 15, 2009.

Guidelines.
The Massachusetts House Ways and Means Committee’s proposed
spending plan would increase arts and cultural funding through the
Massachusetts Cultural Council (MCC) by roughly $150,000 to just over $12.4
million for fiscal year 2009.  Budget decisions for the new fiscal year
(starting July 1st) will be made in early May.
Rebecca Mercer announced her departure from the MFA
Film Program.  Carter Long takes on her duties as the film/video
operations manager as of April 30th.
Craig Goedecke of Hull, MA has been doing a lot of
extra-ing.  And that does not mean he’s been busking newspapers.  No, soon
Goedecke will join the ranks of elite background artists – he’s been on the
untitled Kevin James film set and Fever Pitch.  He’s blogging, too.  Check out
http://massextra2.wordpress.com/.

Also blogging about indie film is Jeremy Clapp; he
wants traffic directed to
http://realindie.wordpress.com/.
The spring edition of MovieMaker Magazine includes a
special article, “Live Free and Make Movies in New Hampshire.”
Monterey Media of Thousand Oaks, CA recently acquired North
American rights to Either/Or Films’ Sensation of Sight. A late
summer/early fall theatrical release is planned, followed by a winter DVD
release.
AmyBeth Parravano of Cranston, RI invites you to
check out No Left Turn,
a short about a mother and son who bond over garage rock.
NH’s Deborah Scranton (The War Tapes) has
once again given soldiers a chance to report their story of the Iraq war in
Bad Voodoo’s War, which can be viewed
online.
Producer Tyler Heon announced that Stagewright
Films, the New Hampshire based production company, is currently in production on
a feature, Just Say Love.  Check ‘em out at
www.justsaylovemovie.com.
Filmmaker and NewEnglandFilm.com founder Michele Meek
posted her short documentary