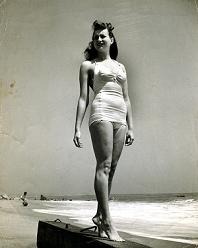 Share
Kate Feiffer’s documentary, Matzo & Mistletoe, examines what it means to be a secular Jew in contemporary America.  It screens this month at the Maine Jewish Film Festival.

Kate Feiffer’s professional background ranges from serving
as associate producer of the PBS/Frontline Red Flag over Tibet, writing a
humor column for Martha’s Vineyard Magazine, to authoring children’s
books, including one in collaboration with her father, well-known illustrator
Jules Feiffer, among other projects.  Matzo & Mistletoe explores what it
means to be Jewish in America when you don’t practice the religion.  Feiffer
intertwines interviews with family, friends, and fellow Martha’s Vineyard
residents with archival footage, film and television clips.  Audiences
nationwide have responded with an intensity that has surprised the director. NewEnglandFilm.com
caught up with Feiffer before the Maine Jewish Film Festival screening.
Deborah J. Hahn: Let’s talk about the decision to
begin making this film when you did.
Kate Feiffer: In 1998, I moved to Martha’s Vineyard
when my daughter was born.   I was hired to interview a well-known rabbi.  We
were chatting and he asked me if I was Jewish.  Even though I had always
identified as Jewish, coming from a rabbi, the question felt different.  I
didn’t know how to answer him because I didn’t actively practice the religion.
I decided I should make a film about this.
DJH: How did the project evolve over the seven years
of production time?
Feiffer: It was dictated by the funding and
influenced by living on the Island.  Initially, I was working with an editor on
the Vineyard and then he got pulled off onto a different project, so I ended up
learning the editing software myself.  Kate Davis, another Vineyard filmmaker,
helped teach me to use Avid DV Express.  This project was definitely homespun.
DJH: How did you put your camera team together?
Feiffer: Jim Francis, who shot most of the
interviews, is someone I had worked with a lot in Boston.  A guy on the Vineyard
who collects Super 8 footage also shot for me.  He showed me how you could
project the films at three-quarter speed, which was so much nicer than slow
motion: it makes it feel more nostalgic.  I liked the pace of it and I wanted to
work with local people.  I also knew I had the family footage in my basement.
DJH: How did you decide to use klezmer carols for
the soundtrack?
Feiffer: They weren’t in the original trailer, but I
don’t recall exactly how I discovered them.  As soon as I did, I called Paul
Lipman and said I’d love to use Oy to the World.  I think it’s hilarious
— the perfect marriage of Judaism and Christian culture.
DJH: Many of the interviewees have geographic or
family connections to you.  Are there people you wish you could have
interviewed?
Feiffer: Art Buchwald — I worked with him in a
Martha’s Vineyard charity.  I wanted to make a relatable film, one that touched
people’s everyday history.  To limit the pool, I chose people connected to me,
or those like Mike Wallace who I knew were living on Martha’s Vineyard.
DJH: Who did you envision as your target audience?
Feiffer: Secular Jews like me and also, to some
degree, more practicing Jews.  And people who are interested in exploring
identity.  How do we accommodate ethnic heritage with American heritage?
DJH: Thus far, you’ve primarily shown the film in
liberal synagogues and in Jewish film festivals — how has audience reaction
varied?
Feiffer:  It’s been more controversial than
expected.  I wanted the film to be a catalyst for discussion.  There’s no doubt
about that.  At almost every screening there’ve been a couple of people who’ve
been very angry, they’re upset at the idea that Jews are celebrating Christmas,
for example. They’re angry about this type of assimilation, which they see as
American Jews giving in to pressure to keep up with the proverbial Jones’ next
door. Then someone else will stand up and challenge that anger, saying that Jews
celebrating Christmas is part of the American Jewish experience, and needs to be
understood in context.  I’m not entirely comfortable with the anger around this
debate; I’m not a confrontational person.  The film has also been shown in
schools and educational programs and the kids have really responded.
DJH:  Your film takes on the question of
assimilation in different ways — for example, there is the model of your
parents’ friends where the wife likes to go to services but the husband doesn’t.

Feiffer: I do think it’s as complicated for a
practicing Jew who marries a non-Jew as to have intermarriage.  Look at the work
that has been done because of those continuity statistics, the fact that so many
synagogues are focusing on inclusion.  I have a hard time believing that the
next survey will reveal that there are fewer Jews than before.  My parents’
generation grew up when secular Judaism was a different beast.  And now I think
people are looking for a way to have Judaism fit into their lives.
DJH: Dialogue about religion between you and your
husband is absent from the film.
Feiffer:  My camera shy husband?  He didn’t want to
be interviewed.  He was raised Catholic and is no longer Catholic and is not
attached to being Catholic in the way I am attached to my Judaism.  So I take
the lead, but we’re on the same page.  Neither of us feels inclined toward
organized religion.
DJH:  Do your parenting choices around religion
carry greater weight for you now?
Feiffer: No.  My daughter grew up with the making of
this film.  She can almost recite it.  She’s aware of the issues as much as
anyone.  We’ve given her the option of Hebrew school.  She has declined, and
it’s entirely up to her.
DJH: In a melting pot culture where Starbucks and
Dunkin Donuts sell bagels and where shows like Seinfeld have been so
popular, aren’t things like bagels no longer Jewish, but rather “American” in
the same way as Christmas trees?
Feiffer: We’re becoming an à la carte culture.
People are picking and choosing.  That’s partly why I was so surprised my film
was controversial.  After 10 years of shows like Seinfeld, I did not
think I was making an exposé.
DJH: The role of food in Jewish identity comes up
several times in the film.  What are some of your favorite “Jewish foods”?
Feiffer: Lox and bagels.  I also love matzo ball
soup.  After I graduated college I lived across the street from the Second
Avenue Deli in Manhattan.  Several times a week, it was my dining room.
DJH: What about non-Jewish foods?
Feiffer: I eat bacon, but I’m not a pork lover.  I
eat shellfish.  When I eat pork I feel guilty.  I definitely have pork guilt.
It’s a vestige.
DJH: If you didn’t live in progressive places like
Martha’s Vineyard or the Upper West Side, how do you think your relationship to
Jewish identity would differ?
Feiffer: When you’re one of a very small minority,
your identity tends to intensify.  If I didn’t live where I do, sure, I probably
would be more prone to join a synagogue.  People at the screening in Dayton were
definitely saying that this was their story, that when they first came to Ohio,
they identified as secular Jews, but slowly started attending synagogue because
of being such a minority.
DJH:  At several moments in the film, you highlight
all you do not know — the gefilte fish joke, for example.  Have you considered
filling in any of the gaps for yourself?
Feiffer: I’m not moved to explore my religion in
that organized fashion.  I’m not quite as ignorant as the film might portray.
But there’s a difference between filling a gap intellectually and filling it
because you have a deep belief.  I’m much more interested in sitting in my house
and reading a Jewish literacy book than in going to services in public.
DJH:  You end the film with a challenge to viewers
to continue the conversation — how has the conversation continued for you?
Feiffer: What I’m interested in is getting these
issues of identity out there, particularly with what is going on with
immigration in this country today.  If people try to understand how we all fit
together then they can maybe learn from each other in the process.
DJH:  What other projects do you have in progress?
Feiffer: I am really focused on writing for
children.  I’m not working on a new film.  I hope this one is with me for a
long time.
For more about the film, visit
www.matzoandmistletoe.org.  For a complete
schedule of the Maine Jewish Film Festival, visit
www.mjff.org.