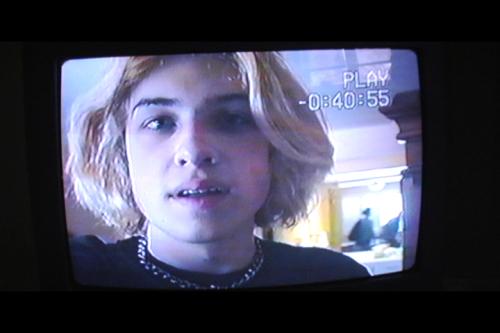 Share
RI filmmakers Christian de Rezendes and Christian O’Neill tell the story of a life cut short by tragedy and the personal significance of the number 41, in their documentary premiering at Woods Hole this month.
On February 20, 2003, the 4th largest nightclub fire in American history claimed the lives of 100 people.  This film is about one of them.” So opens 41.  The documentary focuses on Nicholas (Nicky) O’Neill, who lost his life at just 18 years and 23 days old.  Nicky was the youngest victim of the now infamous Station fire in Rhode Island.  That night Nicky stood alongside other fans of Great White, checking out the location.  His band Shryne was set to perform at the same venue the following night.  His story doesn’t end there, though.  It’s merely a part of his remarkable legacy.

Nicky inspired two storytellers to team up and give his life a proper tribute — Christian de Rezendes and Nicky’s oldest brother, Christian (Chris) O’Neill.  De Rezendes was in between projects, and decided he wanted his next project to have roots in his hometown of Slatersville, RI.  One afternoon he had a chance encounter with his long-time neighbor, Jane Allard.  They lived two houses down from each other for several years, but hadn’t spoken in a long time.  She told him about rehearsing for A Night of Angels in Woonsocket’s Stadium Theater.  That night was a tribute to Nicky O’Neill one year after his passing, she told him.  De Rezendes wanted to know more.

At first, he just set out to document the event.  The evening included a speech made by Dave Kane, Nicky’s father, in which he talked about the last thing that Nicky ever said to him.  The message became a core theme in the resulting film: “The show must go on.”

Shortly after, Nicky’s brother Chris met with de Rezendes to get advice on how to start exploring film, “not related to the idea of telling Nicky’s story,” O’Neill says.  This was before they knew one another very well.  Then they wound up working on a completely unrelated project.  A serendipitous series of events prompted them to want to understand Nicky’s short but dynamic life.

De Rezendes originally envisioned the story as a 20-minute documentary featuring stories about how Nicky reached out to people from the afterlife with the number 41.  But when the rough cut came in over 40 minutes, de Rezendes explains, “It became clear that we had to go further.  I just moved on the ideas that came into my head… get this person, get that person, interview them… and then I got to know Chris [O’Neill] and his family better.”  Through the O’Neills, de Rezendes discovered things no one else told him about the incident, and about Nicky’s creative life, which led to even more interviews.  “It was only clear by the summer of ’05 that this would be a monster to tackle in the editing room,” says de Rezendes.

Financial problems arose, but things had a way of turning around. De Rezendes came into some funds after a small piece of land was sold in his name. “That’s a long and oddly timed story, but if it weren’t for that major event happening, the film would not have been done,” he says.  Later the filmmakers received a grant from RI State Council on the Arts for $3,000.  “That was very helpful, since it went to scoring and other post-production needs.”

After Nicky’s passing, signs appeared that he was still watching over those he cared about.  Many revolved around the number 41, which Nicky felt appeared in nature more than any other number.  “He and I had talked about this kind of thing a lot in the months before he passed,” recalls O’Neill. “At that time, we both believed we were getting signs from my father, who passed in 2000."

O’Neill explains, “I’m of the belief that in the world there’s a natural balance between meaning and randomness.  I don’t think that every time I see a 41 that it comes from Nicky.  But that being said, all my experiences in this life point me toward a belief in a universe that’s responsive and living and full of meaning.  I knew in my heart, from the very moment he passed, that Nicky would try to communicate with us from the other side.”

In 41, Nicky is introduced  through the lens of his brother Chris.  This is by no means an accident.  He videotaped Nicky “starting with the time he was about 5, when I got my first camcorder,” says O’Neill.  “I have a chronicler’s nature.  I don’t know why, it’s just instinct for me.  I feel like it’s my job to record and document everything.”

Chris films Nicky giving a tour of their family’s church, singing "What a Beautiful Morning" from the family attic, and later, sitting in sadness in the attic just before the family moves from that home. At one point, Nicky seems frustrated and asks Chris why he has to keep filming him.  And in that way 41 again poses the question about whether or not our choices are guided by forces unknown or unseen.

About one year before the fire, Nicky wrote a play called, They Walk Among Us, which is eerily about a teenager who dies tragically.  Was it foreshadowing?  O’Neill isn’t so sure.  “My strong gut instinct was that it wasn’t clear in his mind that he would pass away — of course not — but that the idea was in his subconscious, just floating around.  He was definitely thinking a lot about death and the afterlife at this time — we talked about it.  It’s possible that in his own mind he was writing this ‘in case’ something happened to him.”

After Nicky passed away, his friends and family decided to put together a production of They Walk Among Us at the Encore Repertory Company’s Stadium Theater.  Scenes from the play are included in 41.  And incidentally, the play has been made into a film with many of the same actors from the original production.  It seems that all of Nicky’s creative projects have had a ripple effect, inspiring new collaborations and ideas.

O’Neill appreciates this fact.  He says, “We live in a world that’s dominated by a scientific paradigm that really seems to want the elimination of all mystery in the universe.  I’m very pro-mystery.  I think people need that.  And people need hope, they need there to be even just a shred of hope that there’s some point to this existence, that it’s not just a random series of events that start with birth and end with death.”

O’Neill believes that people are afraid to put their hope into anything because they don’t want to set themselves up for disappointment.  And despite losing his brother, and his father before that, he has found meaning and hope in the process of making 41.

Both filmmakers believe that Nicky brought them together to work on a film project.  De Rezendes says, “I am a healthy skeptic, but I do believe people are tied to each other for a certain reason.” And O’Neill speculates, “The hands of fate were all over this.  Nicky’s hands, I should say.”