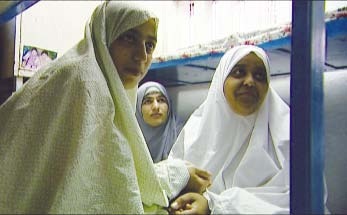 The Long and Shorts of It

Share
Be Garrett, Aaron Augenblick and Shimon Dotan talk about their films screening at the Sundance Film Festival this January.

What do you get when you bring together great films, big celebrities and a ski resort? Sundance Film Festival, of course!

Sundance is the largest independent film festival in the United States. Filmmakers like Kevin Smith, Steven Soderbergh and Quentin Tarantino got their start at Sundance. The festival has even expanded to include a channel devoted to airing independent films, documentaries and shorts.

This year’s festival includes some well-known names, such as Steve Buscemi and John August, but the focus of the festival has always been up and coming talent. New England filmmakers Be Garrett, Aaron Augenblick and Shimon Dotan talk about their films screening at Sundance this January.

A Nick in Time

A Philadelphia native, Be Garrett was the recipient of the Silas Rhodes Scholarship for Film at the School of Visual Arts. After graduating with a degree in screenwriting, he got his first job as a production assistant on a music video for Philadelphia R & B group, Boys II Men.

After several long days on location, he walked away realizing that filmmaking was the career for him. He moved to Brooklyn and went door-to-door looking for work. His persistence paid off when he landed a job at the director Marcus Nispel’s Portfolio/Black Dog Films. He later used his experience in making music videos and commercials to write for directors competing to shoot videos for record labels.

He collaborated with his writing partner, Shakima Landsmark, for the script of his short film, A Nick in Time. The films is about a Brooklyn barber who recounts a story from his past to teach a lesson to a troubled young man.

Garrett is currently in pre-production on his next short film, American Falls, an adaptation of short stories by Barry Gifford. He is seeking financing for two feature films and is attempting to get his production company, 10th of November Films, off the ground.

Nikki Chase: How did you come up with the idea for the film?

Be Garrett: I was in a barbershop one day and told my mother and my cousin, who is a barber, about an idea I had for a story that took place in a barbershop. While my mother was getting her hair cut, we work-shopped the story idea until I came away with a solid foundation to begin writing. Next, I began writing with my writing partner and we continued to volley ideas back and forth until we got a first draft of the script down on paper. From that point on, we continued to refine and tweak the story until we felt it was solid enough and then submitted it to a few short film screenplay contests. The script won the 2001 Organization of Black Screenwriters Script Contest, so the script has been around for a while. It just took me some time to scrap together enough pennies to bring it in front of the camera.

NC: The film has a bit of a political interest, what kind of message are you trying to send with the film?

Garrett: I think the message I was trying to put forth in this film was that we, meaning black men, can’t keep going down the path we’ve been heading on and that, when given a second chance, we must take charge of our destiny and choose a path that is constructive, responsible and upstanding.

NC: What’s the first thing you did when you found out you were selected to screen at Sundance?

Garrett: I picked up the phone and called my mom.

NC: They say that the film says something about the artist, what do you think this film says about you?

Garrett: I look at myself as a socially and politically conscious artist who uses the medium of film to teach people about others. The stories I choose are character driven and deal with the simple wants and needs of our day-to-day experiences. I am a visualist who sees film as being able to communicate my ideas in pictures far more effectively than words can do.

Aaron Augenblick grew up in Wilmington, Delaware and studied at the School of Visual Arts in New York. In college, he created two animated shorts entitled The Midnight Carnival and The Wire the latter of which screened on the Cartoon Network as part of their special, A Night of Independent Cartoons.

After graduating, he began his professional career at MTV Animation, working on television shows such as Daria, Cartoon Sushi and Downtown. In 1999, he founded Augenblick Studios, an animation company in Brooklyn, NY.

His short film, Golden Age is an animation documentary revealing the sordid lives of eccentric cartoon characters from yesteryear. Ten segments highlight the stories of long forgotten animation superstars such as Jerome the Gumdrop, Hansel and Gretel and Mortimer Koon. Golden Age can be viewed in full at www.augenblickstudios.com.

NC: How did you come up with the idea for the Golden Age?

Aaron Augenblick: I have a great love of animation and desperately wanted to document the strange careers of some of my favorite animated entertainers (as I like to call them).

NC: How did you get all the information for the documentary?

Augenblick:I volunteer at the Lost Animation Group, an informal gathering of New York animators who collect vintage animation and hold screenings for colleagues, VFW Halls, and boys and girls clubs across Brooklyn. While screening these amazing old cartoons over the past few years, I discovered a treasure-trove of forgotten gems that I wanted to highlight for the general public.

NC: What’s the first thing you did when you found out you were selected to screen at Sundance?

NC: They say that the film says something about the artist, what do you think this film says about you?

Augenblick: Every segment of Golden Age highlights an individual facet of my personality and worldview.  For example, Mortimer Koon is about the struggle to succeed in the business world, Kongobot portrays the challenges faced by immigrants, and Lancaster Loon deals with drug and alcohol dependency.

Shimon Dotan is an award-winning filmmaker with 10 feature films to his credit. His film, The Smile of the Lamb, was the recipient of the Silver Bear Award at the Berlin International Film Festival. He has also won numerous Israeli Academy Awards, including Best Film and Best Director for his films Repeat Drive and The Smile of the Lamb. In the past, he has taught filmmaking at Tel Aviv University and Concordia University in Montreal.

His latest film, Hot House, is his first documentar. It explores how Israeli prisons have become the breeding ground for the next generation of Palestinian leaders, as well as the birthplace of future terrorist threats. Dotan got unprecedented access to the prisoners for exclusive interviews.

Dotan is currently is post-production for his next feature film, Diamond Dogs, starring Dolph Lundgren. The film is due out in 2007.

NC: Why did you choose this topic for your film?

Shimon Dotan: I was very curious about exploring the motivations and experiences of the perpetrators of terrorist acts, in the context of the Israeli/Palestinian conflict. For many years, I have been preoccupied with the concept of a ‘Just War’ and the question of who is entitled to claim such a title, if anyone at all. Reflecting my own experience in making the film, I think the audience will leave with many questions and, maybe, a few answers.

NC: Why did you decide to do a documentary this time around?

Dotan: I previously explored the Israeli/Palestinian conflict in fiction form in my second feature film, The Smile of the Lamb. At that time, I felt that the only way to approach such an emotionally charged topic was through fiction, so as to remain as far as possible from the daily onslaught of news and media coverage. However, over the years, I came to realize that the news and media coverage is in fact mostly fictional. In seeking a way to come in contact with the very essence of the conflict without the filters of fiction and the manipulations of news media, I employed the documentary lens. In Hot House, I tried to structure a narrative based mostly on conversations with Palestinian prisoners in Israeli jails.

NC: What was the first thing you did when you found out you were selected to screen at Sundance?

Dotan: I was in Beijing wrapping an action-adventure film I had just been shooting in Inner Mongolia. I checked my email looking for a confirmation for the flight back home, and found a confirmation for a flight to Utah instead.   I forwarded the invitation to my partners in the film, Arik, Yonatan, and Dikla, and then ran to tell my wife and call my children.

NC: How did you come across this topic for your film?

Dotan: I saw a short report on Israeli television about Ashkelon prison. It gave a short glimpse into the life of Palestinian prisoners. I was very impressed with the way the prisoners conducted themselves, with their apparent self-discipline and overall sense of purpose. I decided to look more into it. Hot House is the result.

NC: How did you gain access to the prison for your film? And, how did you go about convincing them to let you film in the prison?

Dotan: Access was key, of course, to making this film. First, I asked, and the prison authorities said no. Then I asked again, and still — no. Then I tried some personal contacts that somehow eased the no to not now. Eventually, it became yes, but only once! By the end of the film I spent many days in prison with what turned into an unprecedented access.

NC: What do you think this film says about our future?

Dotan: We shape each other, as both individuals and nations, by the space that we allow or deny each other. The prison-experience in an Israeli jail has become a Palestinian national symbol. The Israeli prisons have become in fact academies for Palestinian nationalism, not only galvanizing its members’ ideas, but also providing a necessary phase on the path to Palestinian leadership. When the Israeli government was negotiating a cease-fire last year, the deal was brokered with the jailed Hamas and Fatah leaders in their prison cells. The leadership of the future Palestinian state is being incubated in Israeli jails today.

NC: What message are you trying to send with the film?

Dotan: When both sides are presenting a claim for perpetual victimhood, they have to start listening to each other. They both may be right.