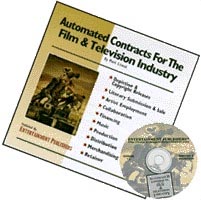 Advice for the Legally Deficient

Share
Writer Peter Boshush shows you the quick and easy way to cover your butt with this tongue-in-cheek profile of Mark Litwaks 'Automated Contracts for the Film & Television Industry' legal software.

People’s Court Case No. 32546: Filmmakers vs. The Rest of the World

This "AUTOMATED CONTRACTS FOR THE FILM & TELEVISION INDUSTRY CD-ROM" ("Software") is entered into by and between the undersigned, Mark Litwak ("Noted Entertainment Attorney"), and Oppressed Independent Filmmaker ("Producer").

1. SCOPE AND DUTIES. Software assists Producers by providing fill-in-the-blank templates for more than 60 contracts for the film and television industry. Includes all of the contracts from attorney Mark Litwak’s book "Contracts for the Film & Television Industry, 2nd Edition."

* Note that Software does not include templates or advice on litigation of any kind, whether in court, in administrative hearings, or before government agencies or judicial arbitration such as Judge Judy or the Ministry of Magic.

2. CONDITIONS. This Software will not take effect, and Attorney Litwak will have no obligation to provide legal services, until Producer purchases and pays for said Software at www.MarkLitwak.com or another retailer. Even then, Attorney includes a significant disclaimer in the Software that basically states these contracts are for your reading enjoyment, aren’t guaranteed in all situations, and don’t call him if you run into problems. Unless of course you’re willing to put him under retainer.

3. DUE PROCESS. Upon installation on either Windows or Macintosh system, Producer shall utilize a web browser application such as Netscape or Internet Explorer to choose a contract. Producer fills in the various fields presented for each contract template, clicks a button and the completed contract appears in the web browser. Said contract can be printed from said browser (said who?) or copied and pasted into a word processing application for editing and/or saving.

5. COSTS AND EXPENSES. Producer shall reimburse Attorney Litwak, author of said Software, for all reasonable expenses incurred by Attorney, including long distance telephone calls, messenger fees, postage, photocopying ($.25 per page), faxes ($.50 per page local, $1.00 per page long distance, $2.00 per page international), parking, and mileage at 32 cents per mile. Attorney shall obtain Producer’s consent before incurring any cost in excess of $200. In order to slide under this threshold, said Software is priced at $199.95 and can be purchased at www.marklitwak.com.

6. DISCHARGE AND WITHDRAWAL. Producer may discharge Software at any time. Software may cease to function ("Crash") with or without Producer’s consent for good cause. Good cause includes Producer’s refusal to cooperate with Software or to follow Software’s advice on a material matter or any other fact or circumstance that would render Software’s continuing operation unlawful, unethical or uneventful. In arduous product testing, consisting of installing Software and running it a couple of times, an independent panel of experts ("The Reviewer") determined that the likelihood of said crash is minimal.

7. CONCLUSION OF SERVICES. When Software’s services conclude, Producer shall print the contract onto permanent pulp-based media ("Paper") via an electronic reproduction mechanism ("Printer") for the express purpose of utilizing the contract in a professional film or video production situation, including but not limited to waving it under an old lady’s nose and shouting, "Look Aunt Mabel, you signed the nudity rider, now get back on the set!"

8. CONFLICT OF INTEREST. Whenever an attorney represents two or more people at the same time with regard to the same matter of conflict, the Attorney has twice the interest to charge these people and play one against the other. This is known as an "interest of conflict," and is considered proper, ethical, and advisable under the provisions of Section 90210 of the Hollywood

Rules of Professional Conduct for Attorneys:

"The Attorney must advise Client(s) of the provisions of Hollywood Evidence Code section 962 relating to the attorney-client privilege, which states, in effect, that the client shall consider it a privilege to be represented by the same attorney who is representing the opposing party; will gladly pay all attorney’s fees, win or lose, because everybody loses in the end anyway."

9. DISCLAIMER OF GUARANTEE. Nothing in this review and nothing in the Software’s statements to Producer will be construed as a promise or guarantee about the outcome of Producer’s experience with the Software. Reviewer’s comments about the outcome of Producer’s use of the product are expressions of opinion only. Your mileage may vary. As always, consult with your physician before beginning any exercise program, and consult with a real attorney for more assistance in entertainment law and contracts.

12. LOCATION. This article has been entered into on this date, is valid for a period of 30 days, and no refunds or returns will be accepted without the original store receipt. In the meantime, this Reviewer recommends Automated Contracts for Film & Television as a good starting point for filmmakers to create quick and easy contracts for all phases of their productions.