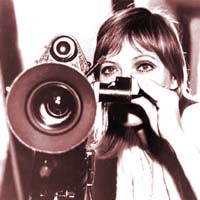 Celebrating its fifth year, Film Fest New Haven (April 7-9) is a broadly focused independent festival that screens everything from comedies and dramas to "works that defy classification." A goal of the Film Fest is to expose regional audiences to innovative new directors from all over the country. For information about tickets and screenings, visit the Web site at http://www.filmfest.org, or write to info@filmfest.org. [See related article in this month’s issue of NewEnglandFilm.com].

The eighth annual Boston International Festival of Women’sFilm and Video Industry News, 4-00 Cinema kicks off at the Brattle Theatre in Harvard Square on April 13. Once again screening films that will be released theatrically alongside those that will run on festival or alternative circuits, selections this year include the premiere of Sofia Coppola’s "The Virgin Suicides," Penelope Spheeris’ long-awaited "Decline of Western Civilization Part III," and the "Shorts Suite," which features films by Boston-area filmmakers Fonda Chin, Azlin Perdomo and Siobhan Dunne. For more information about the festival, call 617-876-6838. [See related article in this month’s issue of NewEnglandFilm.com].

There were two star turns for New England at this year’s Academy Awards. "The Cider House Rules," filmed in Maine, Vermont and Massachusetts, snagged two Oscars: the award for Best Supporting Actor went to veteran Michael Caine, and New Hampshire’s own John Irving took home the Oscar for his adaptation of his novel of the same name.

On April 8, the Center for Independent Documentary presents a special fund-raising screening of the documentary film "My Father, the Genius." Lucia Small made the film after she learned that her father had willed her the task of writing his biography; she offered to make a film while he was still alive instead. The exchange proved to be an examination of the conflicts and culture of the ’70s — everything from environmentalism to divorce. For more information about the film and the event, visit the Web site at http://bershad.com/bda, or contact Cbouchard@sharegroup.com or lucias@ultranet.com for price of admission. Please RSVP, with checks made payable to the Center for Independent Documentary, by April 4 to "My Father, the Genius," c/o Lucia Small, 7 Halifax Street, Jamaica Plain, MA 02130.

The MFA pays tribute to late documentarian Richard Broadman on Sunday, April 9, with a memorial screening of his 1978 classic, "Mission Hill and the Miracle of Boston." Best known for his socially conscious documentary work, the filmmaker taught at the School of the Museum of Fine Arts, Tufts University and the Boston Film & Video Foundation. At the time of his death, he was working on "Brownsville Black & White," a documentary chronicling race relations and urban change over 30 years in the Brooklyn, NY, neighborhood. All proceeds from the memorial screening will be donated to the Richard Broadman Memorial Fund, and will be put toward the completion of "Brownsville." Additional contributions can be made to The Center for Independent Documentary. For more information, please contact Susan Steiner at 617-623-0195 or the MFA at 617-369-3770.

On April 20, the Latin Video Showcase, part of Inquilinos Boricuas en Acción’s Café Teatro series, presents an evening of film at the Jorge Hernandez Cultural Center at Villa Victoria in Boston’s South End. Screenings include the premiere of award-winning media educator Roberto Arévalo’s "Porvenir," filmed in Colombia; Patricia Valladares’ "It’s Tough," a prize winner at the New England Film and Video Festival; and Tanya Brussa’s "No Frontin’," a winner at Chicago’s International Women in the Director’s Chair Festival. "It’s Tough" and "No Frontin’" were created through Arévalo’s Mirror Project. For more information about the Showcase, call 877-302-1707 or write Arévalo or Fiona Jamieson at roberto@straightuppictures.com. For more information about The Mirror Project, visit www.mirrorproject.org or www.straightuppictures.com.

As a pre-release screening in celebration of the Scandinavian Film Festival, the MFA will present "Witchcraft/Lord of Darkness" by Icelandic filmmaker Hrafn Gunnlaugsson. The film mixes history and mythology to tell a story of magic and salvation. Writer-director Gunnlaugsson will be present at this special screening on Saturday, April 8, at 3:45 p.m. For more information, please contact the MFA at 617-369-3300.

The Maine International Film Festival (July 7-16) returns to Waterville, Maine, for its third year. The festival will feature American independent, foreign and Maine-made films, as well as seminars and receptions with visiting filmmakers. Deadline for submission is April 30. For more information, visit the Web site at www.miff.org, or write to info@miff.org.

Cape Cod’s oldest film festival, the ninth annual Woods Hole Film Festival (July 29-August 7), is now accepting submissions for this summer’s program. Renowned for its beautiful setting and its emphasis on regional filmmakers, Woods Hole has expanded recently to include stage readings, workshops and panel discussions, in addition to screenings. Deadline for submission is May 1. For more information, go to http://www.woodshole.com/filmfest/.

The 12th annual Boston Jewish Film Festival (November 2-12) is seeking submissions for this year’s program. The non-competitive festival, named one of the best film series of 1999 by the Boston Society of Film Critics, welcomes films in any genre and of any length that deal with themes of Jewish culture, heritage or history. Deadline for submission is May 31. For more information or entry forms, please call BJFF at 617-244-9899, or email info@bjff.org.

Also in the News

Filmmaker Roger Corman recently negotiated an agreement to produce a feature film in Boston in partnership with Cityscape Motion Picture Education, a new film school for adults headquartered at the FilmShack in Roxbury, Mass. Over the next year, Cityscape instructors and student-apprentices will complete the film, with a shoot scheduled for Spring 2001. Cityscape, which opens for classes in June, aims to train new and emerging filmmakers through work in real film project. For more information, call Laura Wilson or Paula Ribeiro at 617-254-9984.

Comedian and actor Paul Wagner launches BabbleOnTV.com, the first of several streaming entertainment Web sites. Wagner, with 40 clips of his 25 personae ready to stream, welcomes viewer input and ideas at his wholly interactive site. To learn more about Wagner, visit his Web site at www.paulwagner.com, or drop him a line at PaulWags@aol.com.