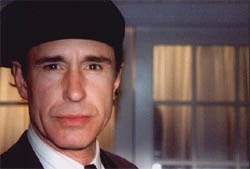 South Boston is a perennial favorite on local newscasts, garnering publicity for anything from its many redevelopment proposals–casinos, football stadiums, convention centers–to its sometimes-controversial St. Patrick’s Day parade. Lately, though, just as much attention has come from Hollywood, with last year’s award-winning "Good Will Hunting," and now the aptly named "Southie." Director John Shea’s look at Boston’s working-class Irish neighborhood focuses on a young man, Danny (rising star Donnie Wahlberg), who returns home for a friend’s wedding. While Danny sees that little has changed in his three-year absence, he is in for a surprise if he thinks he can escape his past.

Shea, who wrote and directed "Southie," is no stranger to New England himself. Having grown up in Springfield, MA, he attended Bates College in Maine and Yale University School of Drama. He spoke with me about the film, which marks his directorial debut.

EA: Why Southie? With other recent films set in Boston ("Good Will Hunting" and "Monument Ave."), what makes the film so special?

SHEA: Unlike those other films you mentioned, "Southie" is the only picture that was filmed and actually takes place entirely in South Boston. "Good Will Hunting" was mostly shot on location in Toronto, while "Monument Ave." is about Charlestown. We also began shooting before those other pictures. Therefore, when we began shooting in the winter of ’97, we were really exploring virgin territory.

EA: How did the idea for the film begin?

SHEA: I had originally written a screenplay where I had been set to star and direct. Then I came across Jimmy Cummings’ script (Cummings plays Donnie’s rival, Joey Ward) and fell in love with it. Unlike most screenplays coming out of Hollywood, Jimmy’s read from the inside out. It was so genuine and real.

EA: Is the screenplay based on actual events?

SHEA: Jimmy grew up on Minton Street in Southie, so a lot of it was based on actual experiences.

EA: How much was authenticity a concern for you?

SHEA: As a director, I was influenced by the Italian [and Italian-American] neorealists, guys like De Sica, Cassavetes, Antonioni, and Scorsese. It was Scorsese, in fact, who strongly encouraged me to direct. He said there should be more Irish directors, and other than Ed Burns ("Brothers McMullen," "She’s the One"), there really aren’t that many.
What made this film so perfect is that almost everyone in the cast is from the area. Out of 45 speaking parts, only seven were performed by professional actors. Jimmy, as I mentioned, is from Southie; Donnie grew up in Dorchester and still has family there. Only Rose McGowan (Kathy) is from Hollywood.

EA: So getting the accent down was not a problem then for the actors? I understand you played Robert Kennedy once…

SHEA: Yes, the Boston accent is one of the hardest in the world to get right. When I made "Kennedy," Martin Sheen and I took six months just trying to get it to sound right. With "Southie," we didn’t have to worry about it–the casting was perfect. When you see barbers, they are real barbers. When you see ambulance drivers, they are real ambulance drivers, et cetera, et cetera. Nothing could have been better.

EA: Tell us about the music. Was it also genuine?

SHEA: Yes. In fact, a fellow from the Southie projects wrote the song played over the closing credits. Bo Cleary, who appears in the movie as a bodyguard for the Irish mob, wrote the song during filming. I played the song for the cast, and everyone loved it. It was recorded by Forever Chosen for the soundtrack album. For the movie, we actually went on location to listen to music being played in bars and bowling alleys. For the wedding scene in the movie, we even watched videotapes from Jimmy Cummings’ real weddings just to hear the music being played in the background. As for the score, I worked with first-time composer Wayne Sharpe, who was just phenomenal. We wanted an urban feel, something that included a mix of both new and old. What we came up with was a combination of modern tribal rhythms, drums, and old Celtic Irish music.

EA: What would you like viewers to walk away from "Southie" with?

SHEA: I’d like them to know how special Southie really is. There are few places in America like it. The original title for the film was "The Brass Ring" because the Irish ring represents love and friendship. One need not be Irish to appreciate these values. I’d like all people, whether they are Japanese, African, Italian, or Korean, to relate. They hopefully will see the importance of what it means to be loyal, to both friends and family.

EA: Thank you for taking the time to talk with us. When can New Englanders expect to see the film?

SHEA: My pleasure. The movie will debut in Boston sometime this spring. I can’t wait to show it here!