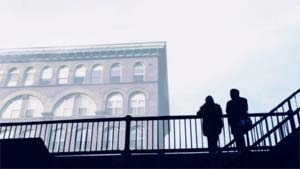 Share
The dish on local films: 'Plastic: The Culture of Debt,' 'The Same Side of Rejection Street' and others. Also, news from local companies & organizations.

Got a scoop? Email all news to news@newenglandfilm.com.

Local Film News
A low-budget dramatic feature titled "The Same Side of Rejection Street" is currently shooting in Boston and scheduled to wrap in mid december 98. it’s a pretty cool project, very very small budget. It’s about two total strangers — one homeless, one middle class — who realize they’re both social outcasts, and find in one another a sort of personal redemption. For more information, visit http://www.sgcollins.com/pages/rejection_street.html

Local documentary producers Tim Wright and Karen Ellzey have just been awarded a grant from the Massachusetts Foundation for the Humanities to begin production on a new documentary with the working title of "Plastic: the Culture of Debt." Their most recent work, "Conservation of Matter: The Fall and Rise of Boston’s Elevated Subway," took the Editing award in the 1996 New England Film/Video Festival and the Grand Prize and Audience Choice award at the 1997 U.S. Super 8mm Film & Video Festival. "We’re at the very beginning of our exploration of this subject," says Wright, "and we are very interested in talking with people who have stories about themselves and credit cards, positive or negative." He can be reached at 617-524-5076 or newsreel@quik.com

Last month, PBS inaugurated its first evening of high definition television transmission – an event that marks the biggest change in the medium since color broadcasting began in the early 1950s. Two shows aired the first night of PBS’s "Digital Week," one of which is "Digital TV: A Cringely Crash Course," a show on and about the new format and produced and directed by Boston independent filmmaker Beth Harrington in conjunction with Oregon Public Broadcasting. Hosted by PBS techno-spokesperson, Bob Cringely, this show takes the viewer to a variety of locales: from the very top of the Golden Gate Bridge to the Ponderosa Ranch; from chef Julia Child’s kitchen to documentarian Ken Burns’ backyard; from the quadrangle at MIT to Mister Rogers’ neighborhood – all in an effort to uncover what DTV will mean to public television. You can order a copy of "Digital TV: A Cringely Crash Course" from PBS Online. http://shop.pbs.org/BiD8IMArVL/products/N0054/

Industry News
Film great Henry Hampton died last month. Henry founded Blackside Productions which in its several decades of existence has produced meaningful works such as "Eyes on the Prize," "The Great Depression," "Amerian’s War on Poverty" and "Africans in America."

The Mass Media Alliance will host its annual Winter Wrap Party on December 8 at the Westin Hotel in Providence, RI. See the event listing for more information.

ITVS is starting a new funding option: LInCS (Local Independents Collaborating with Stations). The initiative represents an opportunity for producers and local public television stations to form full production partnerships. LInCS is intended to provide incentive or matching monies based on a public television station’s in-kind and out-of-pocket contribution to a local independent production as well as underwriting the partnership (station and independent together) may have secured. Currently, WGBH in Boston is not able to handle this initiative because of union pressure. However, interested applicants are encouraged to send email to Susan Walsh, the local ITVS representative at WalshCID@aol.com  Susan will be putting together a list of interested applicants to present to WGBH and also made it clear that there are other public television stations locally and across the country who are willing to work with independents.

BlueStar Media has recently opened its doors in a new Needham location on Great Plain Avenue. Formerly known as Stegman Production Associates, BlueStar produces informational communications. Currently, they are at work on an hour-long documentary for The History Channel on The Big Dig (with their partners Terra Media), and they’ve just completed a 12-minute campaign video for the non-profit organization "The Two/Ten International Footwear Foundation."