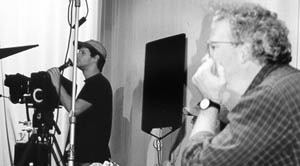 On the Set with ‘Working Stiff’

According to writer-director Greg Joyce, the double entendre in the title Working Stiff is the most ribald aspect of his first feature film. A low-budget dramatic comedy, Working Stiff just wrapped principal shooting in and around the Boston area, including locations in Cambridge, South Boston, Salem and right in the heart of Beantown’s financial district.

With a few cartons of cigarettes and a low-budget "a little less than Titanic," Joyce and Working Pictures Productions set out to tell a comical, David-and-Goliath story. Gene Meserve, corporate video director and emotional punching bag for his bully of a boss, is about to lose his house when the boss reneges on Gene’s cash bonus, which would have covered the mortgage. With a wild idea and help from his coworkers, Gene decides to turn the company’s current "Sexual Harassment in the Workplace" production, on its ears (or back, as it were), to film an "alternate" version of the video – during the night. The results are sexual and situational mishaps as Gene embarks on the road to riches, self-esteem – and sweet revenge on his unsuspecting boss…

After spending a month in the trenches as 2nd AD of Working Stiff, I let Greg catch his breath long enough to reflect on the reasons and rewards of making his own film.

NEF: What film inspired you to write or direct?

GJ: Well, I always wanted to write for movies, but especially after seeing Return of the Seacaucus 7 back in 1980.

NEF: I heard you were offered an option for Working Stiff, but you elected to make it yourself. What inspired that decision?

GJ: Yes, I was in L.A. from ‘88 to ‘92 and finished an early draft of the script, sent it to a producer and he liked it. I had sent him drafts of some of my other work and he liked it and told me to keep him in mind when I was ready with a finished product. He read Working Stiff and wanted to option it, but there were these vague changes he wanted to make and even he didn’t know exactly what he wanted. I have writer friends in Hollywood and I saw what they went through: months of rewrites and producers always changing their minds and not knowing what they want. I didn’t want to go through that.

NEF: Is this your first screenplay? When did you write it?

GJ: The idea came to me probably about five years ago or so. But I wrote my first screenplay in grad school at Syracuse University. I was about 21 and I studied with Ernest Kinoy, an Emmy-winning TV screenwriter who first told me, "You can make it in this business." He had read a few short stories of mine and I worked very closely with him, one-on-one.

NEF: What brought your characters or story to life for you?

GJ: The first day of shooting, I said, "Now, it’s real." But we auditioned at least a hundred people, mostly local talent, during our months of casting. So I’ve been hearing the dialogue spoken for a while now.

NEF: What has been the most frustrating aspect/moment of the shoot?

GJ: The most frustrating thing has been having fifty people looking at me, waiting to block a scene and I’m not sure how I want to block it. That’s a lot of pressure. With writing, if you have trouble with a scene, you’re on your own, you can sleep on how to fix the scene. Also, the logistics. The lights, camera angles, actors, whatever – what you’ve written on the page doesn’t always work when you try to block it out. It reads fine on paper, but in reality takes an extra 25 seconds to do something. So you have to rewrite on the fly, to make the timing work out properly, and cheat a little in the editing room. You spend hours perfecting dialogue and then, "Well, we gotta get the shot off in five minutes, so…" There’s a big difference between the page and the screen.

NEF: The most rewarding aspect?

GJ: When the actors nail the lines. It’s like, "Yes! That’s JUST what I pictured."

NEF: Any advice for writers who want to direct their own first film?

GJ: Stick to your guns as much as possible creatively. There were people interested in the film, who could have brought a lot of money to the production, but they wanted rewrites. They also said, "Bringing in another director would be helpful." Also, everything you hear about how difficult it is to do this, it’s much more difficult than that. There are things you don’t know ‘til it happens; I underestimated the complications. If I could go back in time, I’d focus on the logistical aspect, because once you’re in production, it’s not the creative process anymore. Planning is key.