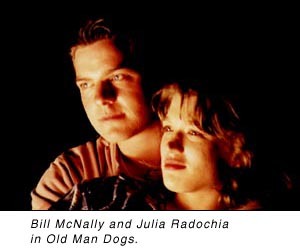 The plaintive sense of longing is the best quality of Millios’ first feature. A young husband and wife, Lyle and Sunnie Theodorou, hike up New Hampshire’s Mount Penobscot; as they near the top, a tiny avalanche drops Sunnie to her death. Her body is never found, however, and a year later, Lyle picks up a ringing payphone at a convenience store and hears Sunnie’s voice on the other end. He climbs back up the mountain to Lodge 16, where he finds a vision of Sunnie living with "Old Man Dogs," a recluse who lost his own wife and daughter on the mountain 60 years before.

While a few of the supporting actors turn in adroit performances, (particularly Frank Mitchell as the hilarious tour guide at the bottom of the mountain and the quiet, mystical performance of Don LaBranche as "Dogs"), the leads (Bill McNally and Julia Radochia) seem uncomfortable in their roles, rushing through most of their dialogue.

Much of that dialogue, furthermore, doesn’t quite fit with the film’s magical realism. The first words Sunnie speaks to Lyle a year after her death, for example, are "Don’t forget the trail mix, Lyle." Much better were the scenes in which Sunnie and Lyle explore Dogs’ cabin, and the vision of Lyle determinedly hiking his way back up to find Sunnie.

Despite a few other production flaws–the costumes were distracting and the sound levels sometimes inaudibly low–this film is a beautifully shot independent feature, and an impressive accomplishment as Millios’ debut (he wrote, directed, produced, and edited the film). His next feature should certainly be interesting to see.