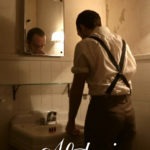 A man deals with his unfaithful wife.

New England Connection: Christopher was born and raised in Manchester, NH. He lived in New Hampshire for eighteen years before moving to LA for film school. Now, he's back in New England, and sharing this side of the country with the world.

Director(s) Bio:: Christopher Goudreault was born and raised in Manchester, NH. Being brought up on watching classic monster movies, he coudn't help but dream of creating similar films for the rest of his life.

He took video production classes in High school, learning more about the field, alongside his friends. After graduation, he moved to Los Angeles to study film at the Art Institute of Los Angeles: California. There, he was away from his friends and family, but was dedicated to his love of art. He absorbed all of this knowledge that was thrown his way, in a very hands-on environment.

After obtaining his degree, he decided to move back to NH. To represent the East Coast and spread what he had learned. He quickly found a job at a small video and lighting company, filming sports events, weddings.. anything that needed to be filmed, he was there. Chris enjoyed the work, but still strives at his real passion, writing and directing his own films.

From age 10, all the way until present day, he has been doing just that. Always working on the next short film. Either with his friends in school, or classmates in college, he kept the gears turning, and brought his short stories to life.

After college, and while working at Boston Event Films, Chris created his best work yet. A short film entitled "Alatoni". This was selected to be shown at the New Hampshire Film Festival 2014. Alatoni was Chris' first submission ever, and it has boosted his self esteem, and added wood to his fiery passion of filmmaking.

This was the first big step, and there are many more to come. His dream gets closer and closer every day, and he is excited to see what the future holds.