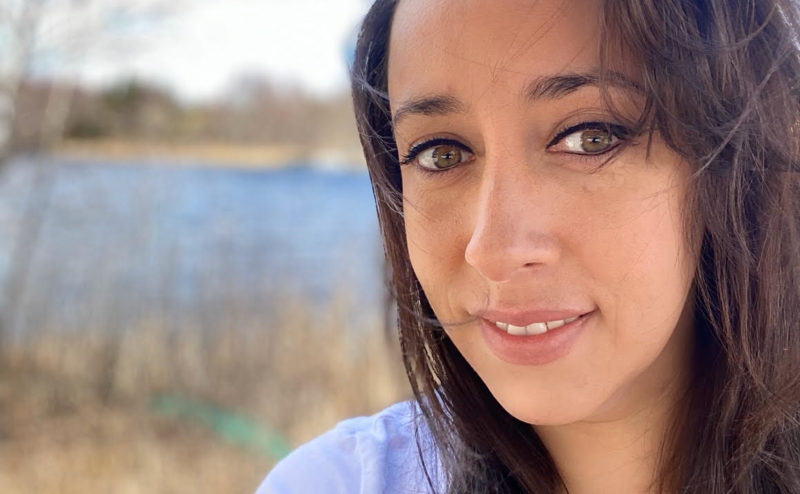 Massachusetts Writer Theresa Drew talks about the inspiration for her script Give Me a Reason and why she’s not a good person to give advice to other writers—but she has some anyhow.

Each year, NewEnglandFilm.com supports a New England-based writer to attend the Stowe Story Labs in Vermont as a fully-funded Fellow. With several labs throughout the year, Stowe Story Labs connects emerging creative talents with industry professionals through workshops and mentorship programs. This year’s NewEnglandFilm.com Fellow, Massachusetts Writer Theresa Drew won a fellowship for her script Give Me a Reason, which Drew calls “a dark comedy about two hilarious subjects: suicide and cancer.”

In the script, Andy has decided to kill herself, but decides to give the universe a deadline to grant her a cosmic reprieve. The universe answers by telling her she has cancer. She takes the hint. But instead of committing the suicide as she had planned, she decides to simply let the cancer do its job while she crosses some things off her bucket list. This does not sit well with Dr. Reagan Ronald, Andy’s uptight, humorless, oncologist, who takes it upon herself to show Andy that death is not the solution.

Here, Drew talks about her inspiration and why she’s not a good person to give advice to other writers—but she has some anyhow.

Michele Meek: What inspired you to write this script?

Theresa Drew: As a comedy writer, I try to search for humorous inspiration all around me, whether it be at funerals, abandoned Russian amusement parks, or the hospital of an American Girl doll store. Once I’ve settled on a topic, in this case suicide and cancer, that has me ROFLMAO, as the kids say, I take the metaphorical cork off all the emotions I suppress and refuse to get therapy for. And the jokes just write themselves.

MM: I’m actually pretty obsessed with death—it’s the one certain outcome of all of our lives. But I think it’s something most people put out of their minds. Why did you want to go for this topic in a comedic way?

Drew: I was attempting to deal with something I was going through by writing, you know, because therapy could possibly help me and emotionally stable people are less fun at parties. So I attempted to write a really sweeping, depressing, gut-wrenching drama to deal with things but every time I tried to make it sad, a joke came out. I don’t think I’m a sociopath, but I’ve also never been tested, so who knows.

MM: How long have you been writing?

Drew: In college, I took a screenwriting class as a prerequisite to my film degree. The syllabus was so overwhelming and my general disdain for writing so intense, that I dropped the class and switched my major to psychology. I have no idea how I ended up here.

MM: Congratulations on being the 2020 Fellow! What are you looking forward to at Stowe Story Labs?

Drew: I’m really looking forward to meeting other writers and creatives whose comparative talent will fill me with even more self doubt and inspire me to continue procrastinating and reading BuzzFeed lists when I should be writing.

MM: Ok, so what’s your advice for other writers?

Drew: Me giving advice to writers would be like Harvey Weinstein giving dating tips to R. Kelly.

However, if there’s one thing I wish I could have learned or rather appreciated earlier, is that it’s all subjective. I spent far too long trying to write in a way that made other people happy. It was freeing to finally getting to a point where I decided that I would rather write something I love, that everyone else hates, than write something everyone loves and I hate.

The harsh reality is that not everyone is going to like what you write but it’s also unlikely that everyone is going to hate it. There is no movie that has a Rotten Tomatoes score of 100 or 0 (I assume. I didn’t actually bother to look that up). So, just write something that entertains you and eventually you’ll find someone who agrees. Unless you’re just a really terrible writer. In that case, good luck to you.

MM: Do you have a website where people can find out about you?

Drew: Unfortunately I don’t have a way to promote myself. I never win anything, so I wasn’t prepared! Maybe this will make me get my act together.

For more information about the Stowe Story Labs, visit https://stowestorylabs.org.