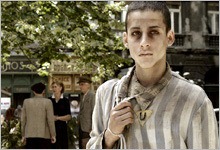 Share
Fateless, screening at the Hartford Jewish Film Festival, tells the semi-autobiographical story of a young boy's time in a concentration camp.

When a topic is dear to millions of people, and a select few films have been able to capture the power of it, it is difficult for a new film to open audiences’ eyes in a new way; to make the audience see the topic in a new light.

Then Imre Kertesz wrote a semi-autobiographical novel about a 13-year-old boy’s time in a concentration camp. That book, entitled Fateless, was adapted into a film of the same name and directed by Lajos Koltai. The Toronto Star believes it "shatters just about every cliché about the Holocaust."

Oscar nominated cinematographer Lajos Koltai had a successful career before making his directorial debut with Fateless, working on such films as Mephisto, Malena, and Sunshine. His work in this field has been credited with part of the success of Fateless, the visuals of which are as spellbinding as Kertesz’s writing.

Fateless was chosen as Hungary’s Official Entry for the 2005 Best Foreign Language Academy Award. It also received two nominations from the 2005 European Film Awards. The first was for cinematographer Gyula Pados and the second for composer Ennio Morricone.

Fateless is a familiar story in that it shows the inner workings of a concentration camp through the eyes of a Jewish prisoner. Where it differs from the conventional stories is that it begins before the prisoner arrives in the camp, during the German occupation of Hungary. The German campaign has already been raging in other parts of Europe. But this does not help Gyuri’s (played by Marcell Nagy) family and neighbors understand the severity of the situation. Gyuri has always thought of himself as both Jewish and Hungarian. When the Nazis arrive in Budapest in 1944, he is most decidedly seen as Jewish.

Once Gyuri arrives in the camp he no doubt sees all of the horrors that have been made an unforgettable part of the way the Holocaust is portrayed in film. But he also experiences a great deal of kindness from other prisoners as they struggle through life with the understanding they may not have another day.

But the film does not end there. Gyuri is released from the concentration camp and forced to re-assimilate himself into a world that was once the only one he knew existed. Those who were fortunate enough to stay behind seem not to comprehend the terror he experienced. But on the other hand, they seem not to have the same compassion and appreciation for life that Gyuri found in the camp among his fellow prisoners in Auschwitz. Mark Trencher, Co-Chairman of the Hartford Jewish Film Festival selection committee says of Fateless, it "is based on the original author’s personal experience, which lends it authenticity. The film concludes with a bittersweet and uncertain measure of hope, which is indeed what life was like for the survivors."

Fateless begins to unravel the mystery that eludes everyone since the Final Solution was brought to an end: how does one deal with such horror on a day to day basis? How does one reconcile the life one has always thought normal with one that could end at any moment, without reason or warning? Trencher says, "Fateless shows the day-to-day struggle for survival of a boy in a concentration camp. We never know whether the boy will live or dies … he could be killed at any moment, and an aura of danger, dread, absurdity and depravity permeates his experiences."

Kertesz won the Nobel Prize in literature in 2002 and brings his beautiful prose to the screen in what the New York Times called, "an uncanny freshness."

As part of the Hartford Jewish Film Festival, Fateless will be playing March 23rd at 7:30pm, at the Wadsworth Atheneum’s Aetna Theater. The committee unanimously agreed that what Trencher called an, "excellent film" needed to be included. He says, "Our group felt that this powerful, realistic and beautifully made and acted film may well be the best Holocaust film many of us have seen. It has been compared favorably to Schindler’s List and Shoah. One of our committee members commented that many Holocaust films get you thinking, but Fateless gets you feeling; and this film will undoubtedly engage the viewer emotionally." As with several other films at the festival, Fateless will be accompanied by a guest expert. Samuel H. Kassow, professor of history at Trinity College, will speak.