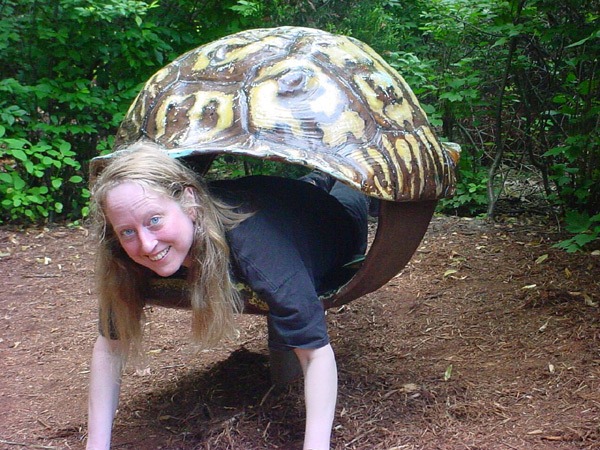 Share
Delightfully zany filmmaker Eva Saks has a word of advice for aspiring directors; write for ducks, but not for cows. The award-winning director discusses her vibrant shorts, the truth about working with children and animals, and the joys of writing/directing/independently producing shorts to air on 'Sesame Street.'

Though independently colorful, playful, or poignant, these images don’t seem to correlate with one another. In the hands of filmmaker Eva Saks, however, they are the ingredients of tender, nostalgic comedy, of powerful melancholy.

Saks’ "New York Trilogy," a visceral trio of short films, captures the essence of post 9-11 New York; a city stirred by tragedy but nonetheless heavily freckled with culture and bursting with millions of idiosyncratic moments. Each piece features a female protagonist, beautifully capturing brief episodes of whimsy, of introspection, of revelation.

Part one, "Confection," is a vignette of the sweetest nature, choreographed to waltzes from Tchaikovsky’s Nutcracker Suite. The film trails a neatly dressed little girl, led by her mother through an upscale Manhattan neighborhood, wide-eyed at the prospect of devouring the strawberry tart balanced precariously in her free hand. The girl has a change of heart about her cherished treat when, swept into a daydream by an advertisement for the ballet, she is admonished by her hurried mother but applauded by an unlikely but gentle audience.

"Colorforms," part two of the trilogy, though sandwiched neatly between two counterparts, is anything but tidy. It features a very messy little girl who delights in sharing color with the world, much to the chagrin of her prim and proper parents, who call for reinforcements in the form of a strict and sour grandfather. When their backs are turned, however, the secretly mischievous old man whisks the girl away for an afternoon of her wildest dreams; the Indo-Caribbean Spring Festival of Pagwa, celebrated by tossing handfuls of brightly colored powder onto fellow revelers.

The ultimate short in the series, "Date" touches on a more somber note. Frustrated by a long wait for her tardy boyfriend, a young woman is unsatisfied by the candle he sheepishly offers in retribution, then sulks at the armfuls of roses he snaps up from a deli. Her brooding evaporates at the turn of a corner, when she and her ruefully silent companion are confronted by a wall adorned with flyers depicting people still regarded as missing after the September 11th terrorist attacks.

As individual shorts, these films are imbued with personality, vividly shot, and thorough enough to function as completed works; scenes that capture life-changing experiences in a matter of moments. When joined as a suite, however, they interweave to form a monolith, a gorgeous, epic statement that parallel those enormous, tragic minutes which forever changed the lives of millions, forever changed an American city, forever changed the world.

Still from "Two of a Kind."
[Click to enlarge]

Both "Confection" and "Colorforms" have aired on the Independent Film Channel, and at festivals worldwide. "Date," which made its debut in 2004 at Urbanworld, will be screening at the end of this month here in New England, at the Williamstown Film Festival. (It will also air on the IFC, in 2005) It will be accompanied by another of Saks’ short films, the brand new "Two of a Kind," featuring an unlikely friendship between a precocious style maven and her soul mate de la couture, Zorba the Zebra.

Saks herself has a background as colorful as her work. After earning her bachelor’s degree in Theatre at Yale, she then attended her alma mater’s prestigious law school. She practiced entertainment law for a few years, managing artists such as the Boston-originated band Morphine, but became interested in filmmaking after working on the casting for an Adam Sandler production. So, she headed back to school again, and is currently pursuing her MFA at New York University’s Tisch School of the Arts.

"I started out as a theater and casting director, so I’ve worked a lot with actors and storytelling," she recalls, "I first made a film about six years ago; I was helping with the New York casting of ‘Big Daddy,’ and I auditioned hundreds of children. It turned out, I had sort of a rapport with kids, so the producer hired me onto the production for 14 weeks. I thought ‘Wow, this is even more fun than theater!’ The first film that I made was called ‘Custody,’ which was a comedy. After I made that, I decided that I really wanted to go to film school."

Saks has made nine films while at NYU, and has earned a slew of accolades, including a Student Academy Award for her documentary "Family Values," which screened at the Sundance, Telluride, and Tribeca Film Festivals, to name a few. A proud new member of the Fox Searchlab, Saks has recently been writing, directing and independently producing comic shorts that are currently airing on Sesame Street ("Alphabet Zelda" and "Alphabet Pam"), continuing her work with children and honing her skills with the oft-dreaded experience of working with animals.

"I have an interesting career," she laughs, "it’s kind of director/zoologist! We had a lot of fun with ducklings on an animal shoot last week. I was going to wait until the rest of the shoot, which was a few weeks away, but the owner of the duckling called me in a panic, and said that the duckling was growing so quickly that I had to shoot right away or I’d have a duck without the ‘ling’!"

Besides the nearly ‘ling’-less duck, Saks has had the pleasure of working with a spectrum of animals — dogs, zebras, rats, an elephant, horses, chickens, raccoons, rabbits, monkeys, goats, and an insolent cow, who, according to Saks, refused to learn her lines. Next up; a short about an ice cream sundae, written entirely in rhymed couplets.

Besides her refreshing comedic voice, Saks has a knack for getting into the heads of her protagonists, and channeling her own experiences and desires. Exposed to Pagwa through her work on a colleague’s documentary, for example, she was immediately inspired to write a short about the holiday after imagining herself as a child experiencing the spectrum of customary celebrations. Her lead actress, five-year-old Kristen DiPietra, had auditioned for "Confection" and, though not quite right for the part, captivated Saks with her innocent bravado and unapologetic messiness. So, "Colorforms" was born.

Though the tone of "Date" is practically antithetical to its more playful counterparts, it may be that it is simply more upfront about its relationship with "the bigger picture," though in no way is it any less complex. It is a bittersweet bookend, an epilogue to emotive curiosity and the exploration that it manifests, putting into perspective, for both the audience and the main character, the superficiality of social codes. The film is a strong finish to an equally powerful series.