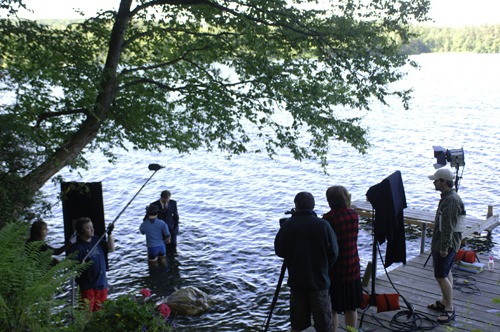 Share
Directors Marie Brown and Yari Wolinsky share their thoughts on the making of their 'Unmoored,' which tells the story of a couple with one afternoon left to get things right and screens online this month at the 2010 Online New England Film Festival.

With the exception of the cast, nearly everyone involved in Unmoored is from the New England area, and production for the film took place in the Berkshires of Western Massachusetts. This week, directors Marie Brown and Yari Wolinsky spoke about their inspiration for the film and local filmmaking.

Yari Wolinsky: After a few years of working on commercial and client-based video projects, there was a growing internal pressure to get back to working independently, to work in fiction where we could do something really different. My father (the film’s producer) and I had tossed around a lot of ideas but never acted on anything. But the moment he mentioned to Marie the idea of working together, it was like we were suddenly hitched onto a fast moving train. Now we were going somewhere, and fast.

Marie Brown: Mutual curiosity. We were a team of artist all coming to new ground together. We each brought pieces of knowledge that together made up a film making crew, but individually none of us had ever embarked on anything quite like this. So we all entered the project on the condition that it would be an adventure in learning. That did not mean we ever let our own personal and communal standards drop. But it did give us all a sense of abandon that allowed us to jump in way over our heads without fear.

AR: What influence do you think living and filming in New England had on Unmoored?

Brown: Living and filming in New England had an enormous impact on Unmoored. We worked somewhat backward in that we decided we wanted to make a film before we had an idea or a script. We determined all our limitations first and built a story from that. One thing we had available to us was the setting of a house on a lake in Western MA. We took pictures of the location and even sent a ground plan to our screenwriter. She grew up in Maine and also is very familiar with Massachusetts area. So she worked from her own experience in building a story based initially on our New England location.

Wolinsky: From the particular kind of light to the architecture of the cabin, it only takes you a few seconds to recognize that Unmoored is set in New England. The audience can use that as a starting point to understand the characters’ sense of place.

AR: Can you talk a little bit about your choices to mix fantasy and reality in telling your story?

Brown: I am a theatre maker usually. And in my work the boundary between the magical, the memory world, the ghost realm, and the ‘fantasy’ world is probably a lot less clear than for most people. In theatre so much of the world of the play is left to be creatively imagined by the audience anyway so it is very easy to make leaps in time and space and reality. Jenny, one of the writers, also usually writes for theatre. So for her and I, it came rather naturally as a story telling method. And Yari and Cary mentioned early on to me that they always like to play with a little sense of magic. When we mentioned that among our set of limiting factors, Jenny took it into account when writing the story.

Wolinsky: I like stories that walk a fine balance between reality and fantasy. I also like making films that leave the audience with questions and different interpretations of characters, plot, and symbols. Unmoored struck me immediately as story that was interesting on the page and interesting to create visually, but also had many opportunities to play with narrative continuity and characters’ perception of reality in reaction to the changing events and emotion of the plot.

AR: What inspired your visual style?

Brown: Cary (and Yari) have extensive experience capturing images in the form of still photography. They brought a wonderful sense of rigor about the framing, composition, lighting quality and balance that few directors of photography probably have, even as professionals. We framed each shot like it could be a gorgeous still photograph. And thus the cinematography had a beauty as well as stillness that served to set the eerie weight of the piece. We also had a very urgent need for instability in the piece as well. We discovered in the editing room that we wanted more POV and hand-held shots to help give the sharp contrast to the powerful calm. So we went back to re-shoot a few moments. I think composed together these two styles worked will to helped build both tension and forward momentum in tandem with the rise in tension of Sarah’s emotional state.

AR: Is there anything else you would like to say about your experience making the film?

Wolinsky: One thing I’m always curious to know about when I watch other people’s films is how they were financed. Unmoored was a labor of love. Everyone was along for the learning experience and shared the responsibilities. We kept the crew small and the equipment needs as low as possible without compromising the quality of the film. Like many micro-budget movies, our biggest expenses were food and sound.